Rani Karnavati, grand mother of Maharana Pratap, an empowered female warrior of Mewar, who sacrificed everything to protect her country and her honour. 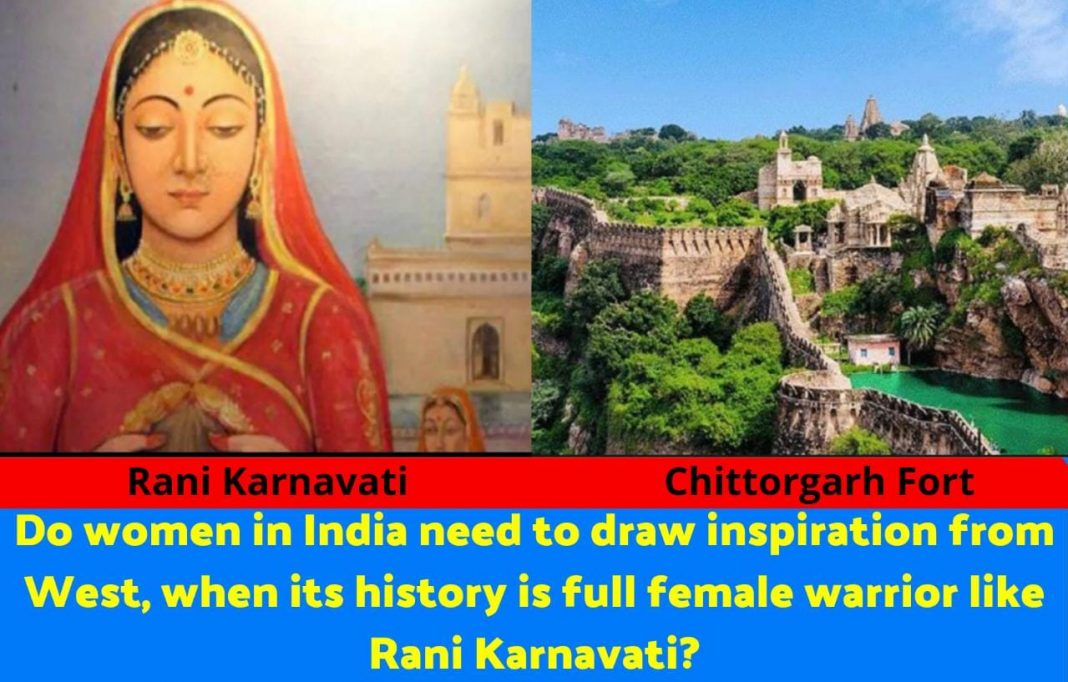 Do women in India need to draw motivation from West, when its own history is full of female warriors, who not only played her multi roles of being a woman with fervour, but they had shown exemplary courage to protect their mother land, fighting against odds and evils?

One such inspiration has been Rani Karnavati, wife of Rana Sanga, Mewar’s powerful king warrior of 16th century, who fought many battles against Islamic invaders despite losing one arm, one eye and had close to 80 wounds on his body. Courage and valour ran deep into family gene. Rana Sanga and Karnavati were grandparents of legend Maharana Pratap.

Daughter of Rao Nirbudh, Hada Rajput King of Bundi, Karnavati was married to Rana Sangram Singh Sisodia, popularly known as Rana Sanga, at young age. Before Rana Sanga married Karnavati, he had other wives—Rani Kanwar Bai Solanki, and Rani Dhan Kunwar. But, her knowledge of administration and warfare set Karnavati apart from other queens. Karnavati was mother of Vikramaditya and Uday Singh II.

Karnavati’s husband, Rana Sanga united all the warring kings of Rajput states after 300 years of death of Prithviraj Chauhan, when he ascended the throne of Chittorgarh. He had defeated Delhi Sultan, Ibrahim Lodi twice in “Battle of Khatoli” in 1518 and in “Battle of Dholpur” in 1519.  In the same year, in 1519, Rana Sanga had conquered Malwa Sultan, Mahmud Khalji in “Battle of Gagron. In 1520 Rana Sanga defeated the joint forces of Gujarat and Malwa Sultnates in “Siege of Mandsaur. He had almost created a “Hindu Nation” in Islamic era much before Shivaji’s Hindvi Samrajya. But, glorious saga of Rana Sanga came to an end, after he lost the war against Babur in the “Battle of Khanwa in March 1527. Although, Rana Sanga managed to escape to Chittor, but he was poisoned to death on 30 January 1528.

Karnavati took duty to carry forward the legacy of her husband after his death. She guided her step son Maharana Ratan Singh II, son of Rani Dhan Kunwar and Rana Sanga, after he succeeded his father. However, he was killed during a war in 1531. Thereafter, Karnavati’s son, Vikramaditya was crowned as the king of Mewar at the age of 14 after his step brother’s death. She defended Mewar serving as regent of her minor son. But, Vikramaditya grew unpopular among Rajput clans of Rajput Confederation formed by his father, Rana Sanga, due to his immature and haughty conducts.

Observing Mewar growing weak, Bahadur Shah of Gujarat, attacked Mewar and reached as far as its capital, Mewar during 1534-1535. Demoralized Rajput Confederation refused to fight under Vikramaditya as they despised him. However, Rani Karnavati requested Rajput clans to fight for the sake of the honour of the Sisodias, and was able to persuade them to fight for Mewar on condition of sending Vikramaditya to her parent’s place Bundi expelling him from battle. Rani Karnavati also sent her younger son Uday Singh with her trusted maid Panna Dai to Bundi for their safety.

Being surrounded by the forces of Bahadur Shah, Rani Karnavati used her diplomatic channel to ask help from Humanyun. But, a popular story says that Rani also sent a Rakhi to Humanyun calling him brother. Thus Rani Karnavati’s name has been associated with the festival of Raksha Bandhan. However, this story was not corroborated by any contemporary writer and historian. They called it a fable. Rani Karnavati virtually led the Mewar army from Chittorgarh Fort. Outnumbered Sisodias fought valiantly, but they lost the war. Rani Karnavati knew the defeat was inevitable.

On 8th March, 1535 Rani Karnavati assembled all the women inside “Chittorgarh Fort” along with infants, children, girls and even old women, and committed Jauhar, mass self-immolation by the Rajput women. Their men donned their Safforn clothes and set out for Saka, their fight till death, as they were aware they were defeated by the huge army of the Sultan of Gujarat.

Humanyun reached Mewar much after Bahadur Shah plundered it and fled. Humanyun too, looted Chittor and went back. The greatest damage that Chittor ever suffered was not at the hands of Bahadur Shah or Alauddin Khilji, but it was Humanyun’s own son, Akbar, who had caused the huge damage to Chittor. Akbar’s siege of Chittorgarh was so devastating that it inflicted permanent damage to the fortress and it never became the capital of Mewar again.

When it came to protect the nation, nothing came between such female warriors and their motherland. Rani Karnavati could have escaped to Bundi with her sons, leaving the fort under military chiefs. But, she chose to fight to save Mewar and embrace death defending the fort.

When it came to protect her honour, she immolated herself, because even dead bodies were not spared by Islamic invaders of bestial tendencies. It was the biggest Jauhar in Chittor history, as 20,000 women committed Jauhar on the day.

Vanvir Singh—who was said to be son of Prithviraj, elder brother of Rana Sanga and a maid—usurped the throne of Mewar in 1536 after killing Vikramaditya. He tried to kill Uday Singh also, but Karnavati’s trusted maid Panna Dai sacrificed her own son Chandan to save Uday Singh, who became father of great Maharana Pratap. Panna Dai, another female warrior in her own right.

When history of India has female warriors like Rani Karnavati and Panna Dai, do women in India need to take inspiration from somewhere else?

Manisha Inamdar
Previous articleWhy do people say that Hinduism has no rules but also say, you can’t eat meat, etc.?
Next articleIs Murderous attack on BJP MLA, leaders and its workers in Punjab reminding modus operandi of Khalistan movement during 1980-90?
- Advertisement -