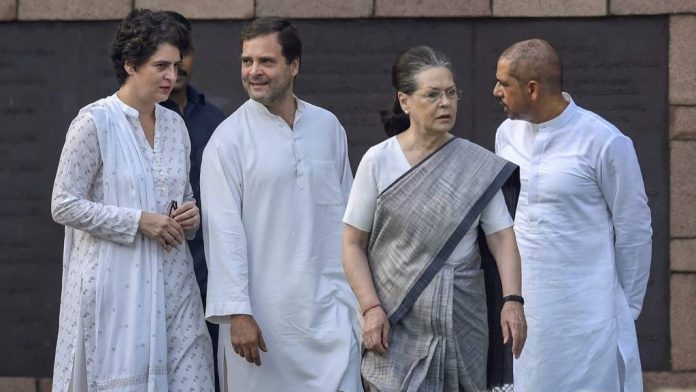 After winning big in six municipal corporations in Gujarat, a week back the BJP majestically swept the elections to district panchayats, taluka panchayats and municipalities in the state, as results came in on Tuesday.

The Congress, which had made significant gains in the 2015 elections to these local bodies, stood decimated and completely vanquished – Gujarat Pradesh Congress Committee (GPCC) Chief Amit Chavda and Leader of Opposition in Assembly Paresh Dhanani resigned from their respective posts owning up to the debacle. Similarly the likes of Hardik Patel and Jignesh have bitten the dust and will take long time to rise and make noises again. Hardik Patel, who rattled the BJP government with the Patidar quota agitation in 2015, feels the Congress is not using him enough. Its leaders “might be wanting to pull me down”, he says. Even the politics of Teesta failed and she was tutoring the likes of ‘dadis’ and ‘nanis’ in the Shaheen Bagh fight. All of them had to cut a sorry figure.

As per the figures, district panchayats witnessed average voting of 66.67%, taluka panchayats recorded voting of 66.86% and municipalities witnessed average voting of 59.05%. Voting for around 7,998 seats of the local bodies was held on 28th February 2021. Prior to that, 237 seats were declared elected uncontested by various candidates. The elections witnessed a three – way contest between BJP, Congress and AAP, but BJP garnered the maximum votes and formed the administration.

During the voting on Sunday, violence was reported at one or two places in the state. In one such incident, an attempt was made to capture a booth in Ghodiya village of Zalod Taluka in the Dahod district. Unidentified persons had allegedly entered the booth and tried to vandalise the electronic voting machines (EVMs) at the location. Following the incident, voting was suspended at the booth with orders of re-polling to be carried out on Monday. As per SEC officials, the re-polling on Monday concluded peacefully with voters’ turnout recorded at 49.12%.

Continuing its run in the local body polls in Gujarat, Asaduddin Owaisi-led All India Majlis-e-Ittehad-ul-Muslimeen (AIMIM) won 9 seats out of 12 contested in Modasa Nagarpalika elections, results to which were released. Of the 9 seats won by the AIMIM, 6 seats were in the Godhra Nagarpalika elections and one seat in Bharuch Nagarpalika. Godhra is the same place, where a train bogey full of Hindu kar Sewaks, returning from Ayodhya was burnt down by the Muslim terrorists by pouring kerosene oil after locking all four gates at around 8.30 am in a stationary train. With this win, the party has become the opposition party to the BJP only in the Modasa, which won 19 seats. The Congress could only manage to win four seats. Congress loses the Kevadia seat — home to Statue of Unity – of Narmada district Panchayat by 82 votes. BJP candidate Dinesh Tadvi defeated Congress candidate Ranjitsinh Tadvi, who is the son of sitting District Panchayat member Dilip Jesinh Tadvi. Footfalls of more than 1,00,000 visitors by tourists have enhanced the earning level of this tribal district by leaps and bound.

Post the debacle of Congress, Gujarat Pradesh Congress Committee (GPCC) President Amit Chavda and Gujarat Vidhansabha Leader of Opposition Paresh Dhanani have submitted their resignations to the party high command and they have been accepted. They will continue to serve the posts on interim basis till the time the party chooses new leaders on the posts, which will be difficult as in time of Modi wave, who takes the risk of joining a sinking ship called ‘Congress of Gandhis.’

“We accept the verdict of people even though the election results are below our expectations. We were not able to bring the issues of people and farmers’ issues during the election campaigning. Will continue to serve the people of Gujarat with new vigour and determination,” said Manish Doshi, spokesperson, GPCC.

In 2015, Congress had won Botad district panchayat but the BJP had got a backdoor entry later on due to defections by sitting Congress members.

Meanwhile, a group of civil rights activists have lodged a complaint with Gujarat State Election Commissioner Sanjay Prasad against Kunvarji Bavaliya, Cabinet Minister in the Vijay Rupani government, seeking action against him for violation of the Model Code of Conduct (MCC). In its complaint, the group – Nagrik Sashaktikaran Manch – has informed Prasad that Bavaliya did not maintain confidentiality of his vote. After casting his vote, the complaint added, Bavaliya said that he voted for BJP and asked others to vote for the party, too. It added that voting has to be confidential and violating the confidentiality outside a polling booth is a breach of the MCC. “The State Election Commission should take immediate action to set an example and give a message that law is equal for all,” the complaint stated.

The complete decimation of Congress and rise of Aimim and Aap in Gujarat needs careful analysis. Muslims are trying to carve out a unified voice as they feel, Congress has not done enough to raise their voice and number of Muslim leaders in different legislatures are going down and they do not have any voice. Likewise Muslims, Hindus are also getting united and voting for BJP and thus sending a clear strong message to the entire world. Similarly many voters who are not happy with the majoritarian governance of BJP wants a new experiment called Aap and they have voted for them. But this is a great danger to the nation. On one hand they notify the 3 farm laws in the state of Delhi but on the other hand they give support to the farmers, which shows their opportunist agenda with a short sight.

But interesting activities are happening for a disaster called dumping of Gandhis. In the peak of election rallies and rallais, Rahul baba was asking for a separate ministry for ‘samander’ ke farmers, showing his lack of knowledge and poor IQ, his party was sharing with left and communal leaders, thereby completely shredding their so called ‘secular’ ideology. Similarly ‘kalrav’ didi aka ‘Twitter didi’ was plucking the wrong tea leaves and dancing with tribals of assam like his great grandfather while internal politics was taking a toll and open street burning of effigies of its middle level leaders in Jammu after a seminar and public meet of its G-23 leaders.

The fight is out in open and it is rumoured that either the Vadras will walk away or real congress will dump the Vadras sooner than later. Just wait, the pied piper will get drowned in the sea, while his followers will stay back to win back the leadership if Modiji allows!