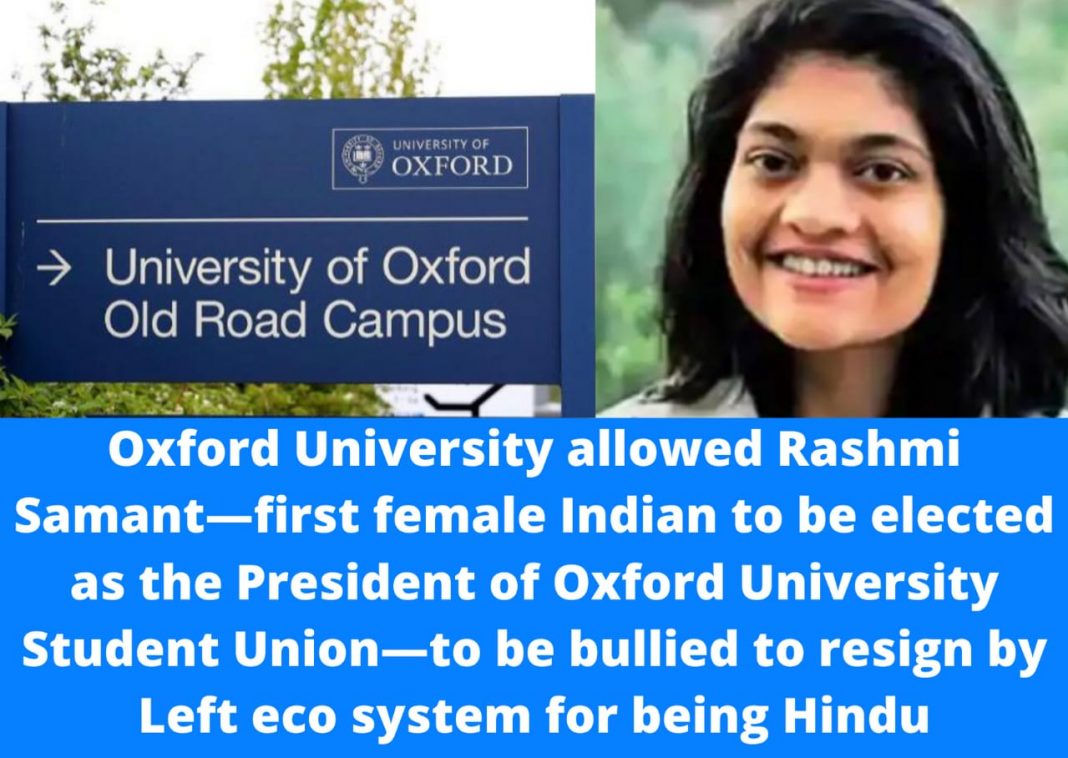 Rashmi Samant—who was the first female Indian to be elected as the President of Oxford University Student Union held on 11 February this year—was cyber bullied and forced to resign from her post as OUSU President two days after getting elected. She was targeted so brutally by the students of Oxford University using her years old social media posts that she had to fly back to India.

Most of campuses and media in West and Europe are infested by ultra Commies/Leftists, who, unabashedly, run their political ideology in the university spaces. A student is either aligned with their ideology or associated with their organizations, or there is no space for him or her. Unfortunately, even a prestigious Oxford University cannot check political bullies in its campuses.

22 years old, Rashmi Samant—who was born and raised in Udupi, a small coastal town in Karnataka—was studying in MSc in Linacre College. She had received 1,966 votes out of 3,708 votes cast for Oxford SU leadership election.

Why was she targeted heavily just after she was elected OUSU President?

Rashmi Samant had highlighted the need for greater “decolonization and inclusivity” in her manifesto during campaign in the campus. She was repeatedly asked during presidential debate, “Why do you insist a policy of decolonization, when it played a role to bring about the world, otherwise billions would be still living a life of absolute poverty?”

Do British need to remind that they landed to India in 1608 as traders to trade? With passage of time, they manipulated and usurped kingdoms and empires in India not only to loot the incalculable wealth of the country, but to force conversion of natives. In the process, they committed colossal blood bath in 1857 revolt, butchered defenseless people in Jalianwala Bagh in 1919, allowed millions of naïve people to die out of malnutrition, hunger and diseases during Bengal famine in 1943. India has gone through such uncountable ordeals for centuries due to colonization.

When Rashmi Samant refused to hold the view that colonization created any positive impact for the indigenous people of the colonies, she was made to pay price for it.

How was Rashmi Samant harassed, bullied and targeted?

A coordinated attack was carried out by bringing her years old social media posts. Cherwell, a weekly student newspaper published by Oxford reported that Rashmi had posted an image of herself on Instagram in Malaysia with the words “Ching Chang,” which upset Chinese Students. Rashmi said she had translated it as “eating plants” and not referring to Malaysians. She was also criticized for posing at the Berlin Holocaust Memorial in 2017. Rashmi explains that was her first trip to Europe. She was a teenager and didn’t know the world. Being a non-native English speaker, she was trying to make a pun on words. She didn’t mean to be insensitive.

Rashmi Samant was attacked in the most brutal way by non-other than an Indian, who was identified as Abhijit Sarkar, one of the faculty members at Oxford.

What can be more unethical and unfortunate than that her parents were dragged to be humiliated. Abhijit Sarkar shared a photograph with her parents with “Jai Shri Ram” calling it Islamophobic. He didn’t hesitate to call the campaign funded by Indians. He continued to spew venom that Rashmi has come to Oxford from Manipal Institute of Technology (MIT) in Karnataka, whose official website displays a photo of Modi, the supreme leader. He ends the post: Anyway, very glad to see that she has been forced to resign within 2 days after her election. Tell Zee News that Oxford students are still not ready for “Sanatani President.”

It is baffling how such a vile poisonous man with deep hatred for Hindus be a faculty in Oxford University?

Hindus are the most afflicted species on the earth. They were attacked by Islamic invaders, their thousands temples were destroyed by Islamic tyrants, their civilizations are still wounded, their lands were taken away to establish Islam. Now the Hindus, who have been victims for centuries, have been projected as persecutors. Those, who set such propaganda, are non-other than mentally enslaved liberal and Leftist Hindus.

What is nauseating is that Abhijit Sarkar blatantly says, when he was a kid he broke several Saraswati idols by thrashing them on the floor. He draws pride that breaking Saraswati idols haven’t had any bad effect on his education, exam marks or academic career.

Would Oxford University be able to weed out such vile and poisonous faculty in its campus. It is to be seen.