The tale of Mallinatha , the female Tirthankara of Jainism. 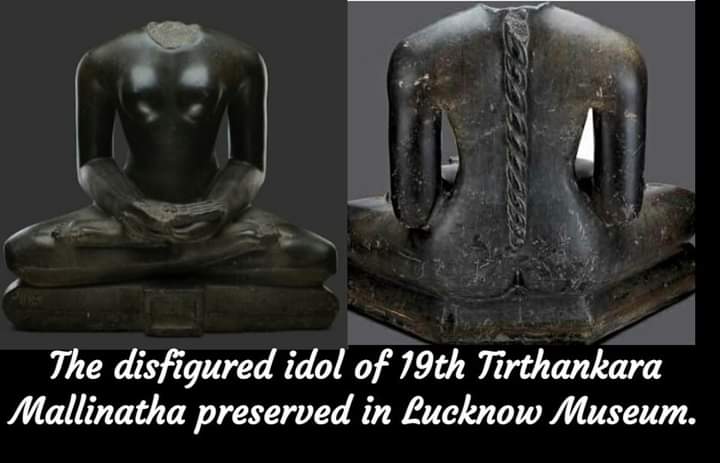 The Hoysala King Vishnuvardhana was converted to Hinduism by Srimad Ramanuja. However his wife Shantaladevi remained a Jain. Both husband and wife contributed to Temples and Jain Basadis respectively. Though their paths were different their goal was the same. They had no conflicts between them regarding the faith they believed. While Raja Vishnuvardhana built the Pancha Narayana temples, Shantaladevi contributed to many Jain Basadis which housed huge and magnificent Adinatha, Parshvanatha and Neminatha idols which are enchanting and mesmerising.

As I have always told I was interested in the Hoysala Art and Architecture and have visited many Jain Basadis too. And the “Chauvvisa Tirthankara” (24 Tirthankara) also was of interest to me. I adore them for their gritty willpower and ability to detach from everything.

In the line of 24 Tirthankara, the 19th held my attention. 19th Tirthankara is “Mallinatha” the only female Tirthankara.

Before going into details of her birth let us see the reason for her birth. It so happened that in the western half of Pushkaradwipa (Modern day Africa) there was a province called Salilavati which had a city named Vishoka. The King of the province was Mahabala. His Kingdom was surrounded by six petty Kingdom. All the seven Kings were friends and lived in harmony. Once King Mahabala felt he should renounce worldly pleasures and take “Dikshe” (Intiation). He told his decision to his six friends who unanimously told they too will take Dikshe.

The seven Kings approached Muni Varadharma and obtained Dikshe. When they were in the process of austerities Mahabala boasted that it was because of his decision that his six friends too were on the path of enlightenment. This slightest ego pampering made him take birth as the daughter of King Kumbha and Prabhavatidevi in Mithila in his next birth.

King Kumbha and Prabhavatidevi named their child Malli who grew up to be very beautiful and intelligent girl. When she reached marriageable age, the neighbouring rulers of Kosala, Anga, Kasi, Kuru, Panchala and Kunala attended the Swayamvara. Malli rejected all of them. The six rejected Kings felt humiliated and planned to attack jointly. Against six mighty army King Kumbha was on the verge of defeat. Malli requested her father to invite all the six Kings to her “Anthahpura” (Inner Quaters) after a week.

After a week when the six Kings entered her Anthahpura, they were taken aback by a statue which look stunningly like Malli. Had she taken seven days to create the statue of herself, the six Kings wondered. Princess Malli asked each King to feel the statue, every King had a different experience at the touch of the statue.

Later Malli opened the detachable head of the statue and extreme foul smell came forth. The statue was hollow and had been filled with the finest eatables a few days ago and rotten by then. Giving an analogy of the beautiful statue, Malli told them beneath the external charm of her sensual body lay an equally foul mass of filthy matter of a transitory nature.

She further told them that she wanted to renounce worldly pleasures and turn into an ascetic. The Six Kings too filled with remorse realized that the way to Bliss lay in meditation and the practice of an ascetic life. Leaving their Kingdom to their successors they followed Malli in ascetic way of life. She was fortunate to transform six individuals and take them to the pathless path even before her initiation. Malli is considered as one among the 24 Tirthankara by the Shvetambara sect of Jains.