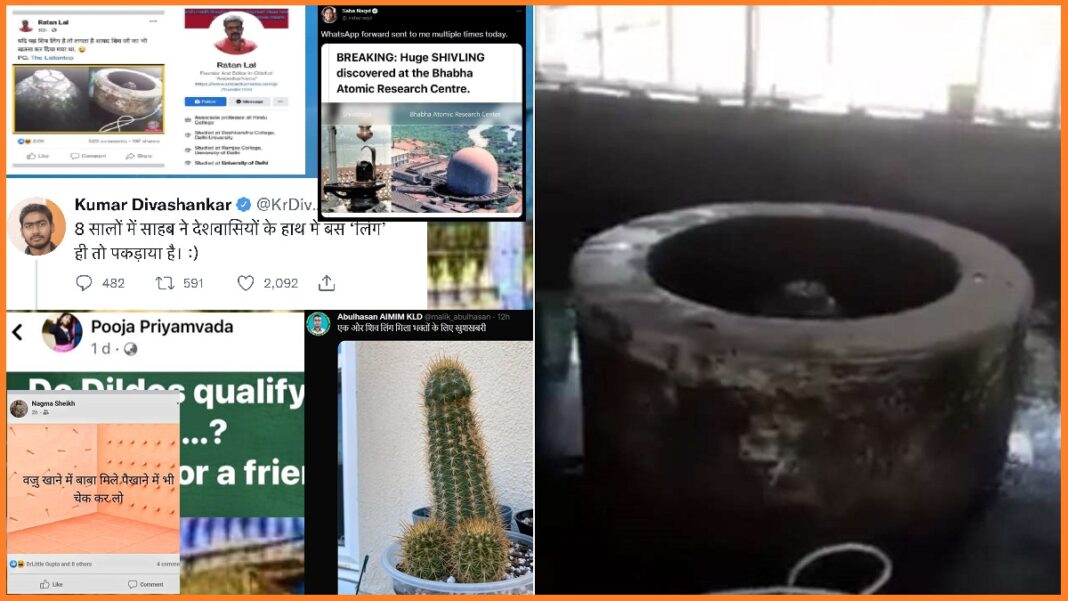 After hundreds of years of hiatus, Hindus have finally got an opportunity to celebrate the discovery of a ‘Shivling’ from the Gyanvapi complex in Varanasi. Hindus were waiting for many decades with bated breath and they burst into massive celebration the moment unquestionable evidence resurfaced while the Islamists have refuted the claims, stating it is a fountain.

It is painful to know that the Shivling was found inside the Wuzukhana, where Muslim worshippers used to wash their hands and feet with water before offering the prayers. The Kashi Vishvanath, who is one of the utmost sacred Gods in the Hindu cosmos, was unfortunately left to be the victim of such unholy treatment from Islamist occupation over the centuries.

When the news of the Shivling being found in the disputed Gyanwapi structure came, India’s Islamists and Leftist intelligentsia got themselves an opportunity to ridicule the Hindu gods. For them, the only truth is the Mosque, and these propagandists who love to defend their ideology and religion at all costs, have started ridiculing and making a mockery of Hinduism and Bhagwan Shiva.

The alleged journalist and full-time radical Islamist Saba Naqvi mocked the development at the Gyanwapi site. Saba made this tweet in bad taste to offend the belief of Hindus, which she later deleted with an excuse that it was a WhatsApp forward.

Delhi University professor Ratan Lal wrote a highly offensive post directed at the Shivling inside the Gyanvapi mosque complex, which came to the fore after the survey ordered by a Court.

Ever since the objectionable post has been shared, Ratan Lal, who is an Associate Professor of History at Hindu College, Delhi, has been facing massive outrage from netizens. Many have responded strongly to the post and also demanded Delhi Police take immediate action against him.

Here we have another Hinduphobic, Pooja Priyamvada, who works as an Academic Director at IIMM, Delhi. Look at what she has posted in the name of freedom of expression.

Politicians usually refrain from making absurd and non-sensitive comments on religious issues, but we have different kinds of politicians in India. Trinamool Congress leader and member of parliament Mahua Moitra, who is known for her outspokenness has made an obnoxious comment on this issue.

Here we have Abdul Hasan, who is a member of the radical Islamist party AIMIM. Well, what we can expect from the disciple of Assaduddin Owaisi?

Hindu hatred and religious bigotry are trademarks of AIMIM leaders, and it has been proved once again. Here we have Danish Qureshi from Owaisi’s stable, who made an utterly disrespectful comment against Bhagwan Shiva.

People have made formal complaints against him and Ahemadabad police have already arrested him.

Here is another radical Islamist Ansar, who used this opportunity to express his hatred against Hindus and Hindu gods. However, his happiness was short-lived, as multiple people raised complaints against him, which forced him to tender the apology and look at his excuse.

Why should boys have all the fun? Even Muslim girls expressed their deep-rooted hatred against Hindus. Here we have Nagma Sheikh, who is an alleged journalist at a small-time media house APN News. Look at her sheer audacity to make such an absurd comment on such a sensitive issue.

Well, she paid the price for her religious bigotry, as she has already been fired by the APN news.

What pains us most is that even a few Hindus have started mocking their own religion in the name of political differences. Here we have Kumar Divashankar, who is a social media convener of Lalu Yadav’s RJD party.

He made a targetted tweet, and everyone knows what he wanted to convey, but then look at his shamelessness in his follow-up tweet. We are pretty much sure that RJD will not take any action against him, as it may impact their secular credentials.

The above examples show that it is the combination of obfuscation of history, willful ignorance, mockery of religion, and a higher degree of Hinduphobia that results in such behavior of few. Surprisingly the collective ‘liberal’ morality still continues to approve of these absurd and insensitive actions.

It is a shocking precedent of gaslighting especially when it came to coming to terms with the atrocities committed by the Islamic invaders in India. The destruction of Hindu temples was justified by the middle-eastern coloniality as idolatry was a sin in Islam.

The present-day bigotry is hence, only an offshoot of what rulers from Qutb al-Din Aibak to Ahmed Shah Abdali did in the history with the idols of Hindu Gods and their hallowed abodes. Unfortunately, a larger section of so-called liberals and seculars have joined the chorus of Islamists to demean Hinduism at any cost.

Manish Sharma
Previous articleGyanvapi Survey Concludes -Ancient Shivling found; Hindus are Rejoicing, while Opposition is Cribbing
Next articleCongress Chintan Shivir or conspiracy to create differences between the states before the 2024 Elections
- Advertisement -