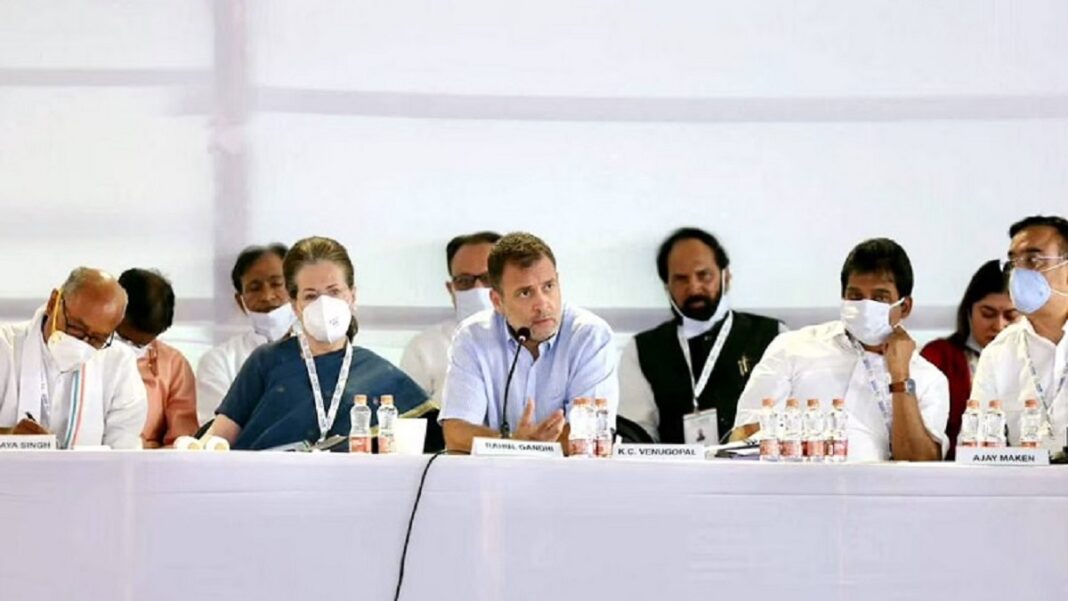 Dejected by successive electoral defeats, the Congress leadership has organized a ‘Chintan Shivir’ in Udaipur from May 13-15. In addition to the top leadership of the Congress, more than 400 office bearers gathered with the aim of strengthening the party. The primary objective of this camp was to provide new leadership as the clamor to make Rahul Gandhi the President of the Congress was raised by the party leaders.

In the Chintan Shivir, the Congress leadership gave stress on “time-bound and necessary changes in the organization”, effectively confronting the BJP on issues including “Polarisation” and preparing for the 2024 Lok Sabha elections. It had also issued a ‘Navasankalp’ which had a preamble to his future steps to be taken, as well as an action plan to make the Congress a strong alternative at the national level.

The Congress leadership first announced the ‘One family-One post-One ticket‘ principle, but as usual, the first Gandhi family was not brought under this ambit. This made it clear that the Congress would operate under the flag of the Leadership of the Gandhi family in the future as well, and it was once again clear that the Congress had not learned any lesson from the successive electoral defeats for almost a decade now.

It was a Chintan Shivir, but from the discussions that took place during this procession, it seems Congress has devised a nefarious plan to divide the people on issues like states, languages, ideologies, etc. Here’s what Congress wants :

Create a rift between Tribals and Businessmen

Rahul Gandhi claims that BJP has broken the country into two parts, one for the rich and the other for the poor. He said that “the Congress and the tribals have a very old and deep relationship. We have been protecting your history. We don’t want to erase your history. In the UPA government, we had brought in-laws to protect your water, forest, and land.“

It seems Rahul Gandhi forgot that for so many decades, it was his party that ruled the country. He must answer why Tribals are so backward?

Rahul Gandhi said that he does not want to erase the history of the tribals, does he want to provoke the tribals by saying this? What has Rahul Gandhi forgotten is how many tribal areas were given for mining by his government between 2004-2014? The Government of Jharkhand, which is supported by Congress, is facing allegations of corruption in the mining allocation these days, what is his view on this?

Congress accuses BJP of conspiring to separate Mumbai from ‘Maharashtra’

Recently Devendra Fadnavis had made a statement about Aurangzeb in a befitting reply to Asaduddin Owaisi. Congress leader and close confidante of Rahul Gandhi, Tehseen Poonawala said that why is Fadnavis not speaking Marathi? And then he said whether this is not a conspiracy to separate Mumbai from Maharashtra.

It is beyond our comprehension how speaking against Aurangzeb became a conspiracy. How is it being called a conspiracy to speak Hindi in Maharashtra? Is this what has been explained in the Congress Chintan Shivir that on any subject, raise the dispute of the state and language and provoke the people?

The primary objective of the caste census is to fetch the data and misuse it to achieve political mileage. Congress follows this principle in the true spirit, that’s why it came out openly in favor of the caste census. For this purpose, Congress also held a meeting of the Coordination Committee on Social Justice in which this subject was discussed.

Congress spokesperson Shravan said, “Only a few castes of the country are taking advantage of democracy, we have asked Congress President Smt. Sonia Gandhi to raise the issue of caste census and unite people on this issue across the country.”

It was a very objectionable statement, and the only purpose of talking about the Census by targeting such a caste is to deepen the caste divide between Hindus.

No trust in Election Commission, Congress asks to ban EVMs

Congress has had a habit of attacking constitutional institutions and in the Chintan Shivir, they have decided to ban the EVMs and hold elections through ballot papers. In the Congress party meeting, everyone was unanimous that if their government comes, elections will not be conducted with EVMs.

Senior Congress leader Prithviraj Chavan said that while making the manifesto for the next Lok Sabha elections, Congress will take this issue to the public and make proposals to make changes in the election process. Chavan said the elections are causing a lot of fuss, and Prime Minister Modi is not going to remove the system. If we have to defeat them, we have to leave EVMs and go to the ballot papers.

It seems Congress leadership has forgotten that they brought the EVM machines into our election process. Congress has won states like Punjab, Rajasthan, and Chhattisgarh, where elections were conducted via EVM machines, but today they are raising questions about EVM machines. Is the Congress leadership misguided, or does it deliberately want to create an atmosphere of suspicion about the constitutional institutions of the country?

As soon as Congress’s Chintan Shivir ended, its leaders started making unnecessary comments on language issues. Recently, a ‘Hindi-speaking Mahasankalp Sabha’ was organized in Maharashtra, where the former Chief Minister Devendra Fadnavis was the guest speaker. As the name suggests, the event was all about the Hindi language. Yet Fadnavis used both Hindi and Marathi languages to address the people.

However, as expected Congress leader Tehseen Poonawala also objected to this. He tweeted why Marathi was not used in this event, and why it was named Hindi-speaking Mahasankalpa. Tehseen deliberately heated up the subject, so that tension could arise between Marathi and Hindi-speaking people. Although Tehseen forgot that he himself had tweeted this in English, what could be a bigger pretense than this?

From all these incidents, it seems that Congress has hatched a nefarious plan to win the 2024 Lok sabha election. It has become clear to her that it is somewhere impossible for her to win elections democratically, so now she is trying to create tension between states and people.

By doing so, they may not get a political victory, but the state, language, and casteist divide in the country will increase further, and gradually the foundation of the country will become weak, and it seems Congress wants that deliberately.