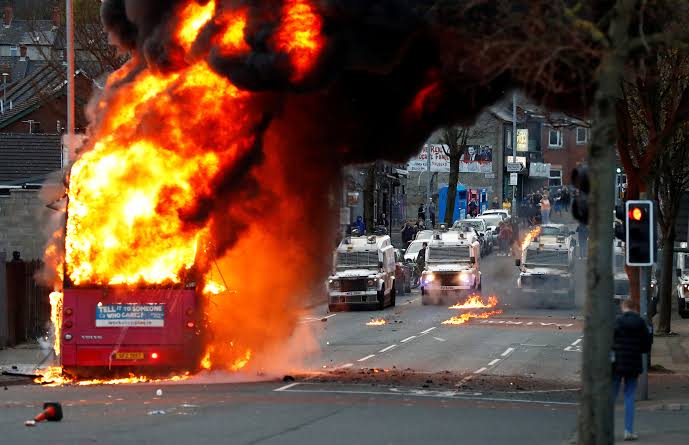 There was yet more violence in Northern Ireland in the recent past, with police attacked again. Water cannons were used in the province for the first time in six years to try and disperse the rioters, who appeared to come from both ‘Republican and Unionist’ areas.

Now, more than two decades after the Good Friday Agreement peace deal brought the years of sectarian “Troubles” in the Northern Ireland to an end, new tensions arising from Brexit, organised crime and political patronage are stoking old rivalries and anxieties, back on the political table.

The conflict was primarily political and nationalistic, fueled by the historical events. It also had an ethnic or sectarian dimension, but despite the use of the terms Protestant and Catholic to refer to the two sides, it was not a religious conflict.

The conflict began during a campaign by the Northern Ireland Civil Rights Association to end discrimination against the Catholic / nationalist minority by the Protestant / unionist Government of Northern Ireland and Royal Ulster Constabulary (RUC). The authorities attempted to suppress the protest campaign with police brutality; it was also met with violence from loyalists, who believed it was a Republican front. Increasing tensions led to severe violence in August 1969 and the deployment of British troops, in what became the British Army’s longest ever operation. “Peace walls” were built in some areas to keep the two communities apart. Some Catholics initially welcomed the British Army as a more neutral force than the RUC, but it soon came to be seen as hostile and biased, particularly after Bloody Sunday in 1972.

While the causes for the violence are multifaceted, observers say it is underpinned by a sense of frustration in the Unionist Community. “There has been this brewing fear on the Unionist side that they are not as British as people in Birmingham,” says Feargal Cochrane, author of Northern Ireland: The Fragile Peace. “A fear that there are different rules applying to them.” This is a clear case of disunity in the minds of citizens.

Brandon Lewis, the Northern Ireland Secretary, will continue talks with local political, community and faith leaders to try and calm things down. Meanwhile, a row is developing over exactly what is to blame for this quite unrest and simmering of riots in the society.

The spark was supposedly the decision not to charge prominent republicans for attending a huge public funeral for a former IRA member during lockdown last year. Tensions over the new Irish Sea border after Brexit have been suggested as another factor. And, as Lord Caine, a former top adviser to the Government on Northern Ireland issues, argued in an interview, there is the recent crackdown on criminal elements on both sides.

Of course, singling out or dismissing any one of those causes is rather silly, not based on true facts and betrays a failure to understand how mainstream politics, sectarianism and criminality interact in the Northern Ireland. What is certain is that this is a rather rude awakening for those on all sides of British politics who see Northern Ireland as a mere bargaining tool in UK-EU relations.

Prime Minister Boris Johnson has condemned fresh violence in Northern Ireland after a bus was hijacked and set on fire. It was pelted with petrol bombs in just one of a number of incidents in Belfast recently. The Northern Ireland Executive is to meet this morning to be briefed on the situation. It follows several nights of unrest in loyalist communities amid tension over the Northern Ireland Protocol on Brexit.

Many still believe, one of great follies of the 21st century was the Brexit and entire Great Britain has yet to rise and shine after the narrow referendum, which was supposed to be the fallout of the Cambridge Analytica fiasco.

The UK’s economic split from the European Union at the end of 2020 has disturbed the delicate political balance in Northern Ireland, despite attempts to avoid such an outcome. Preserving peace in the Northern Ireland without allowing the UK a back door into the EU’s markets through the 310-mile (500km) UK-Irish land border was one of the thorniest issues of the Brexit divorce talks. The arrangement eventually hammered out by London and Brussels was designed to avoid checks between Northern Ireland and Ireland, an EU member, because an open border on the island has helped underpin the peace process built on the 1998 Good Friday accord.

But contentiously, the Brexit divorce deal did lead to customs and border checks imposed on some goods moving between Northern Ireland and the remainder of the UK under the controversial Northern Ireland Protocol, which effectively created a border in the Irish Sea and has raised the ire of unionists. We remember the fishing controversy, which erupted peace and tranquility.

The Biden administration will not take sides in a British-European Union rift over the movement of goods to Northern Ireland, a senior United States official has said ahead of a meeting between President Joe Biden and Irish Prime Minister Micheal Martin.

Biden and Martin are set to meet virtually on Wednesday, few weeks back, the Christian holiday of St Patrick’s Day, as disputes between the United Kingdom and the European Union simmer over the implementation of Brexit agreements on Northern Ireland.

Among the sticking points is the Northern Ireland Protocol, which called for keeping the land border between the Republic of Ireland, which is part of the EU, and Northern Ireland – a British province under a distinct legal jurisdiction – open.

The dispute has raised tensions in the region, more than two decades after a 1998 peace deal, known as Good Friday, or Belfast Agreement, largely ended three decades of violence between mostly Protestant unionists, who want Northern Ireland to stay in the UK, and mostly Catholic nationalists looking to unite the Irish Republic and Northern Ireland. No decision has been made on the US appointment of a special envoy to deal with Northern Ireland, the US official said. The virtual meeting with Martin will be the first bilateral event with Ireland hosted by Biden, who is Irish American. Biden is expected to make a trip to Ireland as soon as this summer.

If the husband, is a Kotwal and global policeman, why fear!