Recusal – Why on the regional basis? 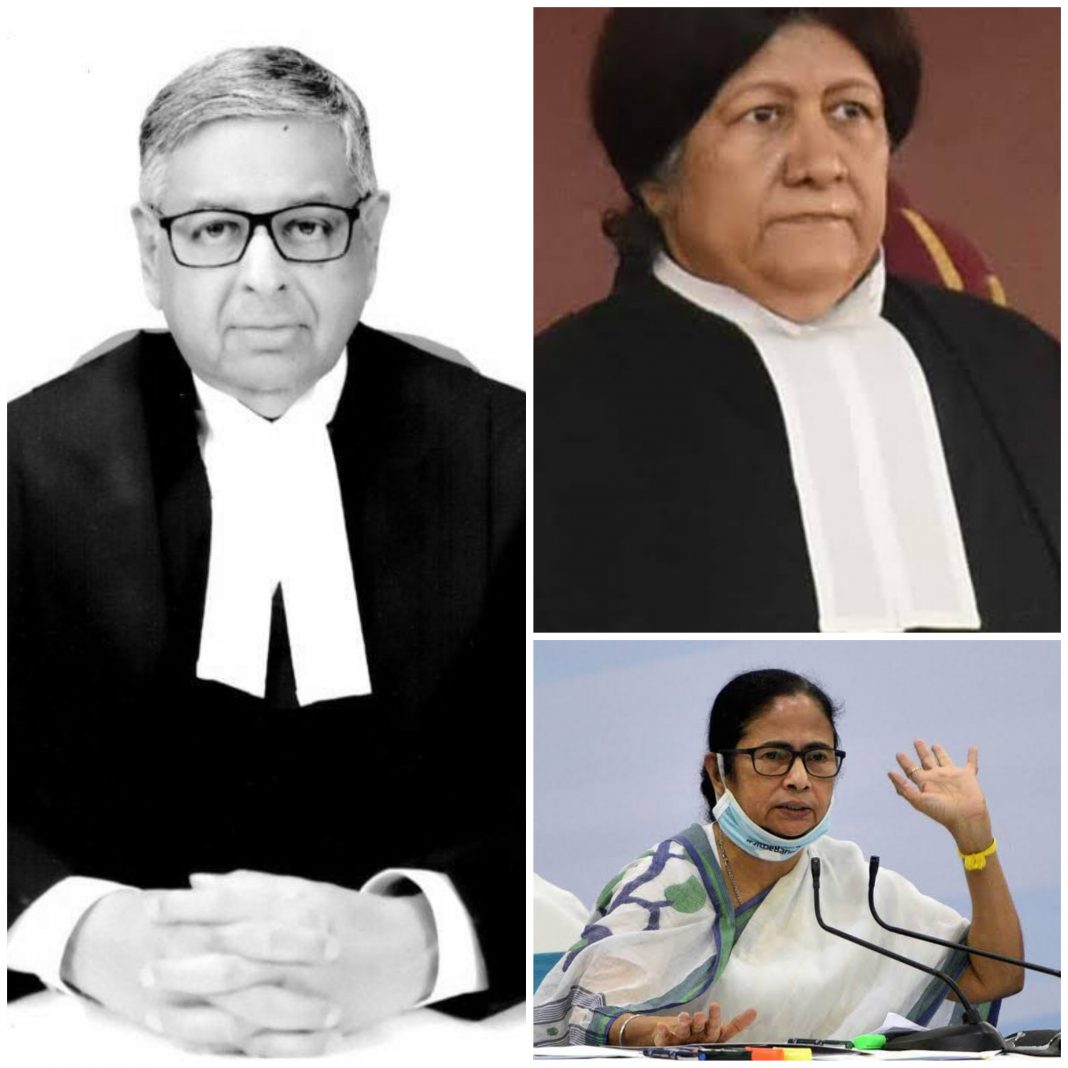 The week beginning 15th June to 20th June, 2021 was a black day for Indian Judiciary. In this week, two sitting Supreme Court Judges, Justice Indira Banerjee and Justice Aniruddha Bose had recused themselves from hearing cases relating to the horrific West Bengal violence, during a bench hearing made by the Lordship CJI.

On June 21st 2021 Delhi High Court Judge Lordship Anup Bhambhani recused himself from hearing a plea by the digital media houses challenging the validity of the new IT rules regulating ‘intermediaries’, related to the Twitter case which has become a hot potato due to the freedom of expression and freedom of speech in cahoots. Cahoot is used almost exclusively in the phrase “in cahoots,” which means “in an alliance or partnership.” In most contexts, it describes the conspiring activity of people up to no good!

Why does a Hon’ble Judge recuse herself / himself / itself when she / he / it sits on the bench for delivery of justice? When there is a perceived and intended conflict of interest, a judge can withdraw from hearing a case to prevent creating a perception among that she / he / it carried an inherent bias while deciding the case on its merit and jurisprudence. The conflict of interest can be in many ways, the family owning a factory, from kids working in the technology companies, from family holding shares in a company that is a litigant, or to having a prior or personal association with a party involved in the case before she or he or it became Lordship.

The practice stems from the cardinal principle of due process of law that nobody can be a judge in her / his / its own case. Any interest or conflict of interest would be a ground to withdraw from a case since a judge has a duty to act fair and ‘appear to be extremely fair’ to the general public, like a Caesar’s wife. Another instance for recusal is when an appeal is filed in the Supreme Court against a judgement of a High Court that may have been delivered by the SC Judge when she / he / it was in the HC. Fair enough.

What was the hidden agenda in this case? Madam Justice is from Bengal probably, who is also a Bengali and comes from West Bengal probably, where the heinous violence was perpreted. It was forgotten that judiciary in the third pillar of the democracy, along with executive and press!

What is the process for recusal? The decision to recuse generally comes from the judge herself / himself / itself as it rests on the conscience and discretion of the Judge to disclose any potential conflict of interest. In some circumstances, lawyers or parties in the case bring it up before the Lordship / Judge during the arguments.

These small mercies happen during external final examinations at FMS, DU, and Delhi University exams, where examiners have to give an undertaking that none of their clan is appearing in the exam. Similarly all members of the tender evaluating committee have to give such undertakings before evaluating any tender.

If a judge recuses, the case is listed before the Chief Justice for allotment to a fresh new bench formed to give justice. There are no formal rules governing recusals, although several Supreme Court judgments have dealt with the issue.

In Ranjit Thakur v Union of India (1987), the Supreme Court held that the tests of the likelihood of bias is the ‘reasonableness’ of the apprehension in the mind of the party. “The proper approach for the Judge is not to look at his own mind and ask himself, however honestly, “Am I biased?” but to look at the mind of the party before him,” the court had held. “A Judge shall not hear and decide a matter in a company in which he holds shares, unless he has disclosed his interest and no objection to his hearing and deciding the matter is raised,” states the 1999 charter ‘Restatement of Values in Judicial Life’, a code of ethics adopted by the Hon’ble Supreme Court.

Can a judge refuse to recuse? Once a request is made for recusal, the decision to recuse or not rests with the Hon’ble Judge. While there are some instances where judges have recused even if they do not see a conflict, but only because such an apprehension was cast, there have also been several cases where Judges have refused to withdraw from a case. For instance, in the year 2019, Justice Arun Mishra had controversially refused to recuse himself from a Constitution Bench set up to re-examine a judgement which, he had delivered previously, despite several requests from the parties.

Justice Mishra had reasoned that the request for recusal was really an excuse for “forum shopping” and agreeing the recusal, could compromise the independence of the judiciary. Justice Misra has recently taken over as the next Chairperson of the National Human Rights Commission, after former Chief Justice H. L. Dattu relinquished the office on 2nd December 2020 as the Chairman, who was quite controversial in the coal scam.

With Navlakha’s protection from arrest ending on Friday, the SC agreed to his counsel senior advocate Abhishek Manu Singhvi’s request that his plea for scrapping the FIR be listed on Friday.
Justice Ravindra Bhat became the fifth Supreme Court Judge to decline to hear activist Gautam Navlakha’s plea for quashing of an FIR lodged against him in the Koregaon – Bhima case. Navlakha approached the apex court challenging ‘the Bombay High Court’s September 13 verdict which refused to quash the FIR lodged against him in the 2017 case for having alleged Maoist links after noting that there was prima facie substance in the case. Retired Justice Markandey Katju had recused from the Novartis.

In the Ayodhya – Ramjanmabhoomi case, Justice U U Lalit recused himself from the Constitution Bench after parties brought to his attention that he had appeared as a lawyer in a criminal case relating to the case.

Do judges record reasons for recusal? Since there are no formal rules governing the process, it is often left to individual judges to record reasons for recusal. Some judges disclose the reasons in open court; in some cases, the reasons are apparent. The two Supreme Court judges who have recused from cases relating to West Bengal had been Calcutta High Court judges. The cases they have recused from relate to post-poll violence in the state and the Narada scam, which have become political battles between the West Bengal State and Centre in court.

In a landmark verdict in 2015, to protect its own clan and ‘Brother Judge family’ hold on the Judges appointment, holding that the National Judicial Appointments Commission as unconstitutional, Justice Kurian Joseph and Justice Dr. Madan Lokur had referred to the need for judges to give reasons for recusal to build transparency and help frame rules to govern the process.

The NJAC Bill and the Constitutional Amendment Bill, was ratified by 16 of the state legislatures in India, and subsequently assented by the then President of India late Pranab Mukherjee on 31st December 2014.

The NJAC Act and the Constitutional Amendment Act came into force from 13 April 2015. On 16th October 2015, the Constitution Bench of Supreme Court by 4:1 Majority upheld the collegium system and struck down the NJAC as unconstitutional after hearing the petitions filed by several persons and bodies with Supreme Court Advocates on Record Association (SCAoRA) being the first and lead petitioner. Justices J. S. Khehar, Madan Lokur, Kurian Joseph and Adarsh Kumar Goel had declared the 99th Amendment and NJAC Act unconstitutional while Justice Jasti Chelameswar upheld it.

The recusal, especially in the case of West Bengal episode is a great blot on the so called independence and air judiciary and must be legally redressed. Such judges must be automatically benched for 6 months.

Is that too harsh view Lordship. Let us finish the age old practice of summer break, winter break or autumn break, which we as school kids were used to! World is change, so much the Hon’ble Judiciary!