Pitru Paksh, a time to revere our ancestors. 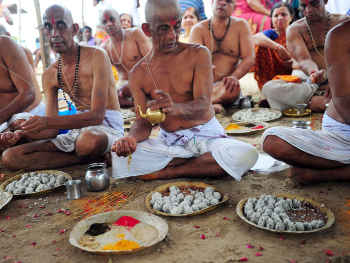 Pitru Paksha is the time when Hindus pay respect to their ancestors. It is considered a sacred ritual for Hindus as the scriptures mention it to be the pious duty of generations in Hindu families to perform it as respect to the ancestors without whom the individual would not have existed. The ritual is termed as “Pitru Karya” (Ritual to Ancestors).

Puranas points to the lives of Shravana Kumara, Pundalika, Aaruni, and Upamanyu as examples of those who cared for their parents when they are alive. There is no sense in performing a grand ritual in this month of Paksha Maasa, if the parents are sent to old age home when alive.

Our ancient scriptures says Pitru Karya is more relevant than Deva Karya (Ritual to Divine). In this ritual Pitru Karya could be performed on any of the days between Bharadpada Shukla Poornima to Ashivija Shuddha Amavasya. The essence is to please the soul of our ancestors by feeding or giving donations to Brahmin and Crows as per an individual’s capacity. Rationalist ask when we have cremated their physical body and the Soul had merged with Absolute who is the beneficiaries of all this Daana (Offerings). We have totally forgotten that the Sukshma Deha (Subtle Body) consisting of Mind and Intellect that exists even when the Sthula Deha (Physical Body) or the Karana Deha (Soul) is not. This Subtle body is the beneficiary through a Brahmin. Since Subtle body is the constitute of Mind and Intellect it does not posses sense organs, it is just satisfied by the emotional feel offered by the posterities.

At early times the Brahmin community was one which would teach and preach the way of life by sharing the knowledge they had. It was their profession but they had no other means of income like the other three namely Kshatriya, Vaishya and Shudra. An individual is a Brahmin not because he is born in a Brahmin family but his character and his way of life makes him a Brahmin. He is the one who would live on the donations and not earn by selling knowledge. Also it is not so simple to receiving donations on behalf of departed souls, after accepting such donations a Brahmin has to chant “Gayatri Mantra” at least 108 times so that the fruit of the donation will reach the subtle body under mention.

Crows are the only species which do not fight over food. In fact a crow does not consume food without calling other crows for company to eat and in ancient scriptures we are told that the departed soul would sate its hunger through a crow.

Why not give donations to orphanage or old age homes????

In those times when the Shastras (Scriptures) were inscribed there were no orphanage or old age homes. If a child lost its parents the relative would take care so there was no orphanage, in fact there was no word called orphan. In Mahabharata when Karna was disowned by Kunti due to unavoidable circumstances, he became Radheya since Radha took care of him. It is only in this modern era there are orphanage and old age homes due to slow deterioration of moral responsibility in individuals.

Pitru Karya though is guided by some ritualistic practice as suggested in scriptures, it is personal where conviction becomes the key. I remember reading about an incidence in Ramayana where Sitamata offered sand balls instead of the prescribed traditional rice and til balls as pinda to her father-in-law (King Dasharatha) while in exile. The Jivatma (Subtle Body) of Dasharatha accepted it joyfully, it doesn’t matter what we offer the intention to offer is important.

Even today we find people who respect their aged parents and look after them with great care. They are just using the opportunity to clear the Pitru Rina (Debt of the Ancestors) when their parents are alive and not waiting for their parents to depart to show their respect .I bow to such individuals.