Historical Context of ShriRam Janmabhoomi, a must read book for every Hindu. 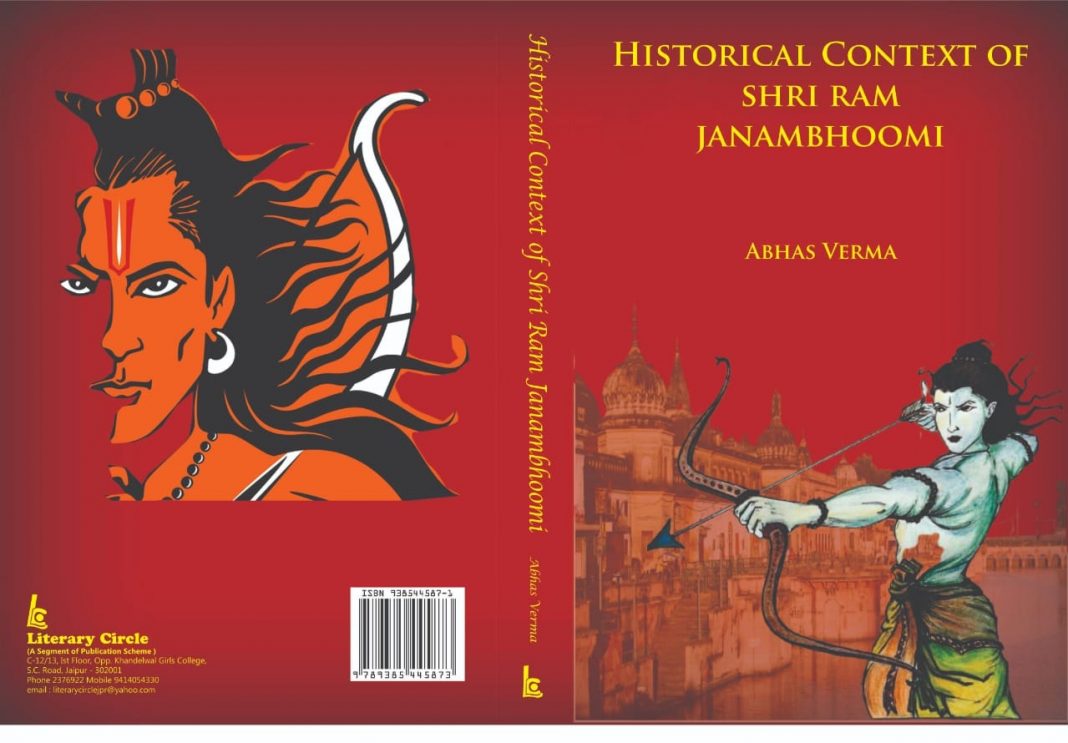 The book ‘HISTORICAL CONTEXT OF SHRI RAM JANMABHOOMI’ by Abhas Verma on 12th September ,2021  was launched by Dr. Subramanian Swamy in an online event.  The event was broadcasted live on Facebook , Twitter , Youtube  and other digital platforms over multiple countries .

While launching the book Subramanian Swamyji stated that he was the first one to point that to  prove the  fact that God Ram was born at that very first place  was immaterial. He said, “It is the faith of the People that God Ram was born there and a temple was there and  faith could  not be questioned “. Adding further he said, “That was my main argument in the Supreme court, because when I entered the Supreme Court in this case , they were only talking about to whom do that area belong to, there was a Hindu Party , which said we are trusty of the property and the waqf board said , no no this is Waqf Property .” He emphasized further , “What is Important is the faith , the  Hindus in India regarded that Ram was born there and you cannot question it  because that is faith”.

He compared it to the belief of Christians over Bethalaham and said , “Nobody has the proof that Lord Jesus was born there , 400 years after the death of Jesus , the mother of the Queen had a dream that Jesus was born and that was accepted “.
He said,  “In the entire argument  in the Ramjanmbhoomi matter , nobody argued that Lord Ram was born there, the dispute started in Allahabad High court as to who owns the area. It is a property dispute and that is why it was taking so much time, it is when I came and said – I am not giving you proof but I am telling that it is the faith of the people…  and faith you cannot reject….that is the argument that the supreme court rejected.”

Stressing on the importance of Historicity he commented as to why Hindus wanted to claim this particular temple, “Historicity is very important to know ,  otherwise it looks as if that the Hindus are in overwhelming majority  and in power and therefore we can do anything to any Masjid.  No, it is because of this background”.
He also asked Abhas Verma that if you say that, “Akbar was liberal then why didn’t he gave the Ram temple back to Hindus in Ayodhya, to build the Ram temple ?”. He also commented “had DaraSikoh been the Emperor , Hindu Muslim relations would have been different”.

Recollecting his days in the cabinet of then Prime Minister Chandrashekharji, he informed that , “In 1990-91 when I was minister and Chandashekhar was prime minister , he  asked me ‘Why don’t you talk to your friend Shahabuddin and find a solution by discussion’. So Shahabuddin had said this ‘No Muslim will agree to build a mosque on the religious place of another religion” .You can demolish it but cannot build a Mosque on it , because you are not allowed to do that  according to Islamic law, to build a Mosque  on a religious place or a building of another religion’. “ Syed Shahabuddin,  was then Chairman of the Babri Masjid Action Committee.

Swamiji during the discussion raised the point of restoration of temples of Kashi and Mathura also. Ending the discussion he advised Abhas Verma, “You please pursue this , because you have got some new ideas….your book is quite different from other books”.

Link to buy this book online given below

Guest Writer
Previous articleDelhi Restaurant denied entry to a Woman for wearing Saree, says ‘We don’t allow such clothes’!!
Next articlePitru Paksh, a time to revere our ancestors.
- Advertisement -