From Mahmud of Ghazni to PFI’s war against Hindu, what has Hindu community learnt since 1000 years? 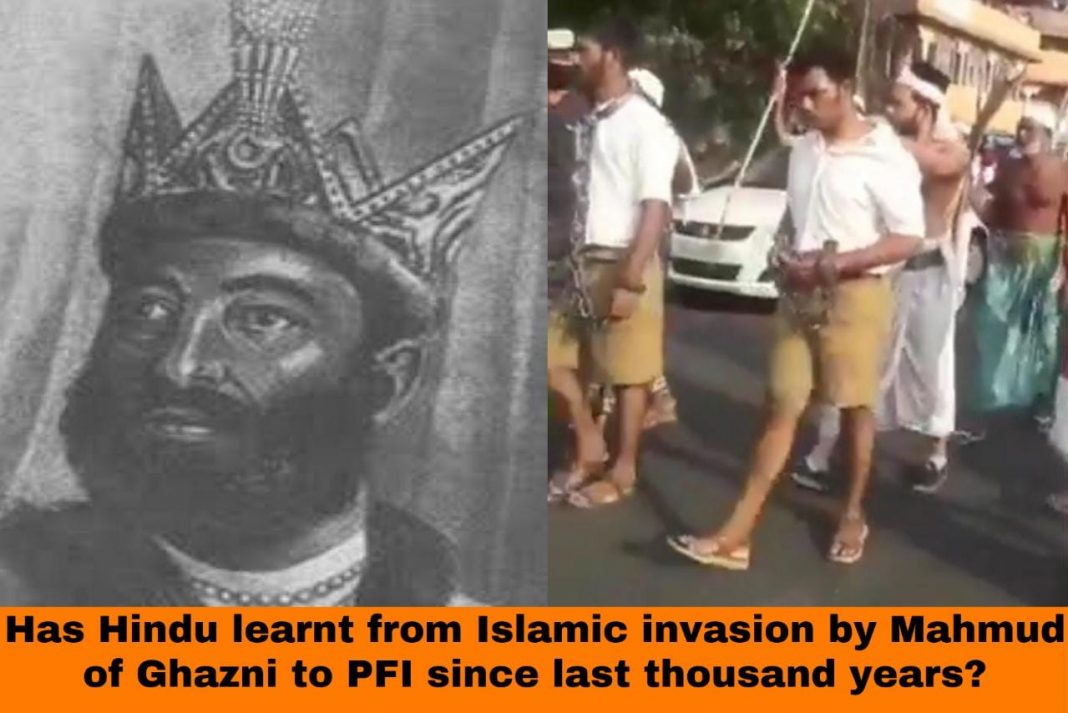 Wounds on Hindu civilisation is so deep and bloodied that even after thousand years, Hindus painfully recall how Mahmud of Ghazni, brutally attacked India 17 times to plunder wealth, to brutalise Hindus and to destroy temples. Has Hindu learnt from Islamic invasion by Mahmud of Ghazni to PFI since last thousand years?

Men dressed in RSS uniform were chained and tied to ropes with its other end held by people in skullcaps and Lungis, and paraded on the street, while PFI members whipped sticks on them with chants of ‘Allah Ho Akbar.’ And La Ilaha Illallah Muhammadur Rasulullah. The rally was taken out by Popular Front of India (PFI), a radical Islamist organization, in Tenhipalam town in Malappuram district in Kerala on 19 February. The procession, which also included men dressed as British officers, chained and tied in ropes, was to celebrate the centenary of the ‘Moplah rebellion’ or the ‘Malabar Rebellion’ or ‘Moplah Hindu Genocide.’

Moplah Hindu Genocide brings the memory of a series of atrocities in which around 3000 Hindus were butchered, equal number of Hindus were forcibly converted and raped, 30,000 fled as refugees and more than 100 Hindu temples were destroyed during 1921-1922 Moplah Rebellion, when rebels targeted Hindus apart from attacking British establishment.

Did a radical Muslim organization celebrating Hindu genocide 100 years ago, offend Hindus across India? Did they bother to protest against PFI, besides some verbal reaction on news channels? The answer is “NO.”

What is atrocious in the rally is that RSS didn’t even exist during 1921-1922, nevertheless, PFI tried to disgrace RSS cadres unabashedly. Did RSS, the biggest organization, held any procession to slam PFI, which is also said to be involved in terrorism? The answer is “NO.”

One year passed after Muslim mob led by Aam Aadmi Party (AAP) councilor and others committed North East Delhi riots, which claimed more than 50 innocent lives in Feb 2020, to protest against CAA, which was passed by a democratically elected government with due debate in parliament. Did Hindus in Delhi hold a rally to commemorate North East Delhi riots? The answer is “NO.”

Hindus are the planet earth’s only community, who never learns from history that how they have been attacked and brutalized by Islamic invaders since thousand years, and how it is crucial for them to get united. Be it era of 2000 AD or 1000 AD, Hindu never learnt it is Islam, which has been bleeding India since thousand years.

During 10th century Mahmud of Ghazni (Born on 2 November 971, died on 30 April 1030)—who was the son of Abu Mansur Sabuktigin, a Turkic slave soldier of the Samanid ruler—ruled from Ghazna, which is modern Ghazni in Afghanistan.

Mahmud of Ghazni or Mahmud Ghaznavi (He must not be confused with Muhammad Ghori) attacked India 17 times between 1000 and 1026.

Mahmud of Ghazni defeated Hindu King Jayapala in “Battle of Peshwar” in November 1001. As a result of humiliation Jayapal later immolated himself on a funeral pyre.

He defeated Anandapala, son of Jayapala, attacking Multan in 1006 AD.

Mahmud of Ghazni crushed Sukha Pala, who was ruler of Bhatinda in 1007 AD.

He attacked Nagarkot, which was in the Punjab hills, in 1011AD.

He conquered Shahi kingdom, which was then under Trilochanapada, son of Anandpala and grandson of Jayapal in 1013 AD.

Next year, he unsuccessfully invaded Kashmir in 1015.

He conquered Mathura crushing a coalition of rulers in Chandra Pala in 1018 AD.

He invaded and conquered Gwalior in 1023 AD.

Mahmud of Ghazni attacked Somnath temple to loot wealth amassed inside, in 1025 AD.

The next year, he marched to Kachch to capture its ruler Bhima in 1026 AD.

The same year Mahmud of Ghazni attacked the Jats of Jud in 1026 AD, but forces of Jats inflicted heavy loss to Ghazni’s troops on its way to Multan from Somnath.

The next year, he avenged Jats by ravaging them in 1027 AD.

Mahmud of Ghazni, a radical Islamic fanatic, who not only plundered India, but looted Hindu temples and destroyed idols of Hindu deities to injure Hindu religion.

A disturbing question arises why were Hindu kings in India were fractured and separated, even if they witnessed their counterparts being crushed one by one Mahmud Ghazni? Why weren’t Hindu Kings in India united forces, which could have given blood thirsty Islamic invader befitting counter reply?

Mahmud of Ghazni not only destroyed Somnath Temple, but he destructed temples of Kangra, Mathura and Jwalamukhi.

What has changed since 1000 years? Hindu temples are still attacked in and desecrated in India by Muslims. A radical outfit like PFI is still celebrating Hindu genocide. And Hindus have been living in denial since thousand years.