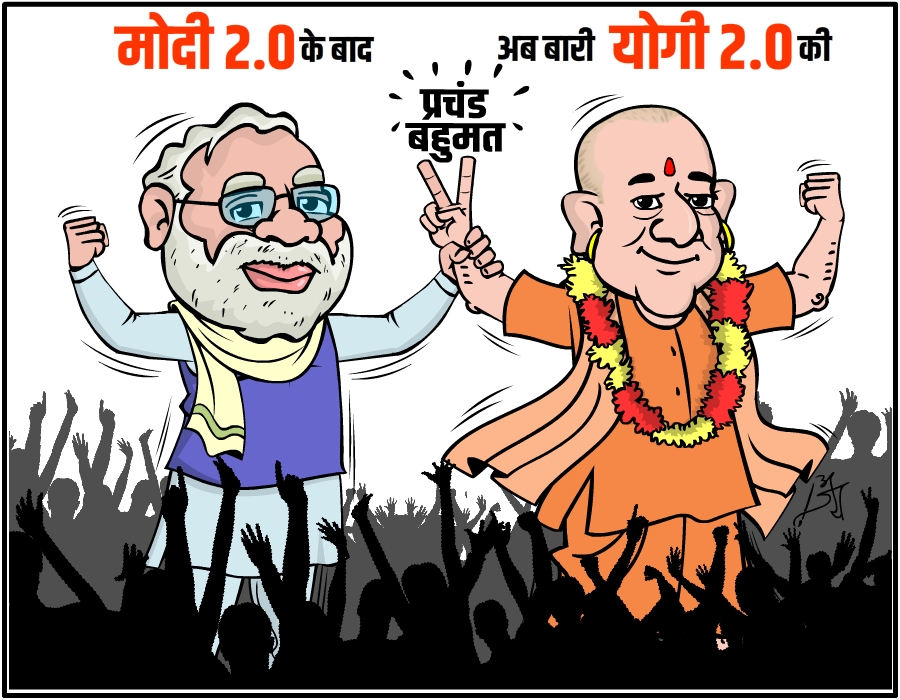 Brahmins were angry and joined hands with SP to teach a lesson to a Thakur.

Jats were angry because of farm bills and anti-farmer attitude of BJP.

Hindus made use of all benefits and ditched BJP due to caste politics.

Voting percentage was low because Hindus didn’t go to vote while the Muslims voted 99%.

Such facile conspiracy theories. Let’s look at the numbers. Here are vote percentages of different parties from 2017 and 2022.

It’s clear that Samajwadi Party gained almost 14.3% votes over its 2017 numbers. Look at BSP and Congress. BSP lost 9.23% and Congress lost 3.85% votes. RLD, which had alliance with SP this time had 1.78% votes in 2017. Adding the numbers, these percentages make approximately 14.8% shift from these 3 entities. Add several smaller parties that had tied up with Akhilesh.

The picture is clear. It was consolidation of nearly all or almost ALL Anti-BJP votes in favor of Akhilesh that lead to this performance. But what about BJP ? The vote share of BJP and allies went up from 39.67 to 45.1. That is an impressive 5.3% gain of “Positive votes”. While the consolidation in favor of SP was mostly negative assimilation of people angry with BJP, the Yogi-ji lead BJP attracted over 5% more votes purely based on “Good governance”.

I too was disappointed by the numbers initially. But here I am trying to dig deeper and find out the reality. We must understand, whatever a Government does, there always will be people dissatisfied due to different reasons. Some might have lost their privileges or entitlements. Some might have their allegiance to leaders or parties. Some might have had bulldozers visiting them or their near and dear. Some might harbor deep seated dislike or hatred for BJP.

So it’s extremely difficult for parties to get vote share greater than 50%. Even when Arvind Kejriwal won a landslide 67/70 seats in Delhi, his vote share was 54.3%. The 3/4 landslide victory for AAP in Punjab comes with 42% vote share. It’s the 4 cornered contest that made his victory so huge. It was the same story with the UP BJP win in 2017. BJP had only 39%. BSP had 22% and SP had 21%. The realignment of voters and Anti-BJP consolidation was the reason for lesser seats this time, in spite of 5% higher vote share.

So the reality is simple. Brahmins didn’t ditch BJP. Maurya community wasn’t angry because Swami Prasad Maurya himself lost. Hindus weren’t careless or selfish. 2022 elections saw the largest polarisation of Nationalist Hindus who voted BJP in the history of Assembly elections in Uttar Pradesh. BJP has had a larger vote share in UP only once before. That was 49% in 2019. But that was also because of a number of smaller parties, which were part of NDA. BJP rightly chose to eliminate some of them because of unrealistic demands.

People like Chirag Paswan in Bihar and the SAD in Punjab have learned their lessons. Traditionally BJP has never ditched allies. It’s always the alliance partners who ditched BJP in the past. Mayawati, Kumaraswami, SAD and Nitish Kumar; all of them learned the hard way towards becoming irrelevant. There will be more political realignment in the future. Opposition will try their best to cobble together an alliance. There will be mutually exclusive and warring groups that may come together just because they hate PM Modi. But from where they stand, BJP just needs to bring people like Chirag Paswan back and 2024 is a done deal.

Let’s stop blaming Hindus, Brahmins and Thakurs. Yes, we must further strengthen our unity and strive to achieve 51% plus vote share at the national level. But we cannot achieve unity by playing blame-game in this moment of victory. Unity comes when we indulge people with back-slapping in appreciation and not by cheek-slapping in admonition. UP-YOGI is our BIGGEST win after 2019. Let’s savor it and strive to achieve even greater victories in the future. The countdown for 2024 has begun and has begun well.