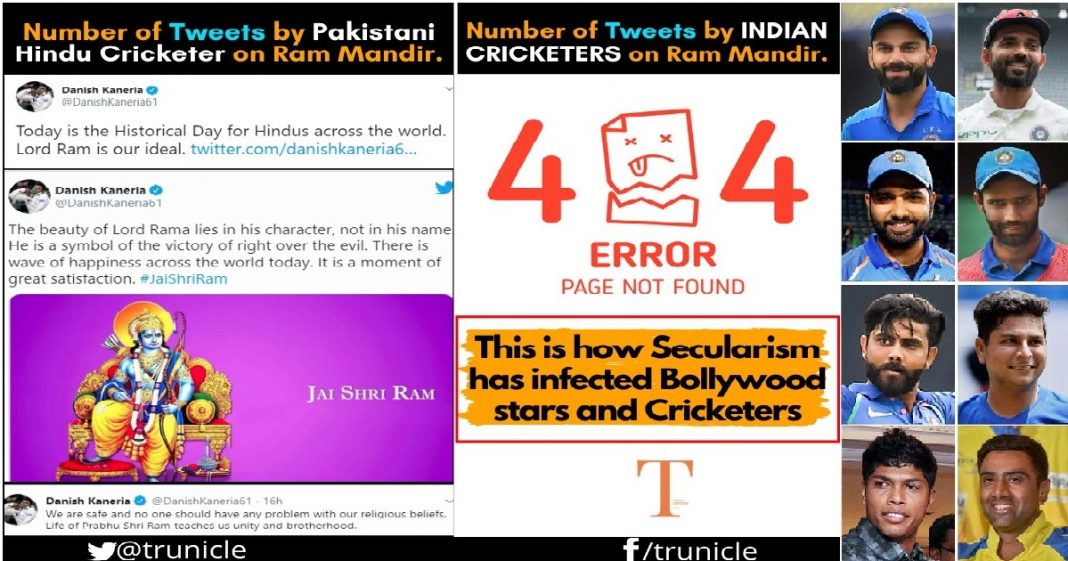 Yesterday was a historical day, when after a fight which lasted for almost 500 years, we finally laid the foundation of our Idol Shri Ram at Ayodhya. Hindus were in jubilant mood since yesterday and loads of Good wishes have been pouring in from every nook and corner of the World.

Danish Kaneria, who is a renowned Cricketer from Pakistan, who is known for expressing his religious belief without any fear and hesitation. He tweeted the following post to express his happiness for the cause of Ram Janmbhoomi.

Cricket Fans and Hindus all over the globe were jubilant with this public display of sentiments by Danish Kaneria, however, at the same time some Fans were also fearing for his safety as he comes from a minority community (Hindu) in Pakistan and everyone knows the track record of Pakistan with Minority communities. Though Kaneria responded and said “We are safe and no one should have any problem with our religious beliefs. Life of Prabhu Shri Ram teaches us unity and brotherhood.”

While a Pakistani Hindu Cricketer was showing his solidarity with the cause of Hinduism, we were shell shocked with the reaction of Indian Cricketers, who are actually Hindus by their names, but somehow always pretend to be a Pesudo Secular.

It’s not that these Cricketers were busy or away from social media, most of these Cricketers expressed their shock for Beirut’s Bomb Blast, but they didn’t care to congratulate their fellow citizens on such an auspicious day.

They have all the time to share promotional stuff and silly Tiktok videos, donation tweets for Shahid Afridi or anti-pollution tweets during Hindu Festivals, but when it comes to taking a stand for their religion, they develop cold feet immediately.

Our question is very simple, what stops these players to take a stand and express their religious beliefs? Why do they always ready to show their pseudo-secularism. If a Hindu Cricketer of Pakistan can express his respect for Bhagwan Ram, then what stops Indian Cricketers to do that?

Money? Fear? Pseudo Secularism? Dhimmitude? or All of the above?