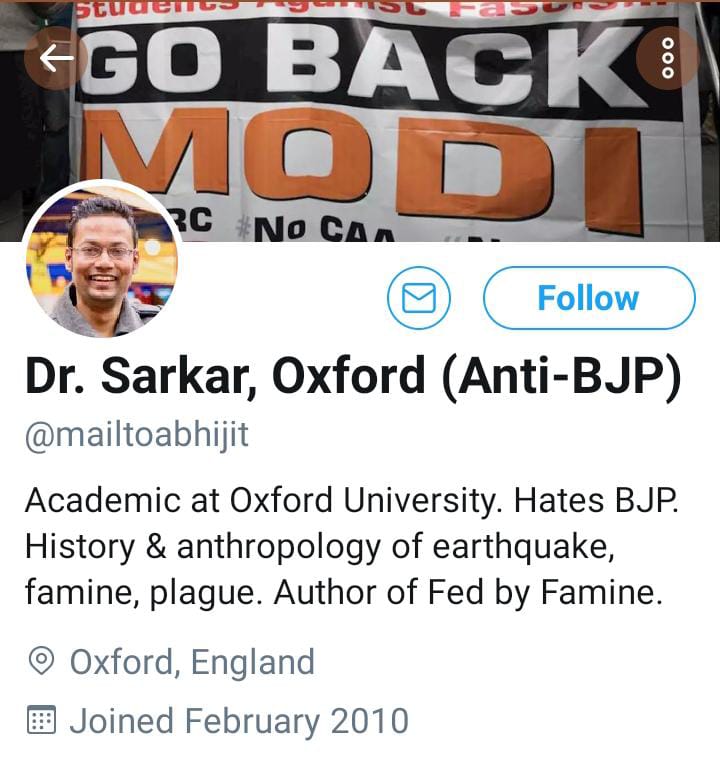 Imagine how much money is on offer if you are ready to be a hinduphobe, ultra radical bigot, sexual pest who harasses women, anti India and anti Modi foul mouth who derides Indians.
When Britishers ruled India, they used to hire men like him to torture Indians and from accounts of incarcerated freedom fighters, it was these brown sahibs who were Satanically cruel and evil. They used to be barbaric in their methods in torturing own People to prove their loyalty to British.
Veer Savarkar mentions in his books how fellow Pathans used to be the worst barbarians in kala pani jails and British used to use them to torture freedom fighters.
During Jallianwala Bagh massacre too it was Indian soldiers who were firing at kids and women in cold blood.
We have seen V@ze in how he went overboard in proving his loyalty to political bosses in doing his crimes against Indians and India.

This Abhijit Sarkar is from the same mould and he is an extreme Hinduphobe, with absolute hatred for Hindus, India and Indian state.
His past tweets also show that he is a mentally sick & Hindu hater & deserves to be punished severely.
He let the racist, woke leftist hounds on an Indian kid simply because she was a Hindu achiever from Coastal Karnataka whose parents were Practicing Hindus.
This guy has 10 crores in his kitty to let Wannabe Dish@s, Umer Khalids, Deep Sidhus implement toolkit to undermine India.
England has still not moved away from trying to harm India even after robbing and plundering us for 200+ years and now uses protection to these kinds of goons along with Nadeem Khans, Lord Nazirs, motley Khalist@ni and Jih@di terr@rists of Paxtaani origin, Vijay Mallya etc.
Oxford must be a scary place if it gives protection and employment to such a sick being.

Rajesh Patil
Previous articleChinese fans of Aamir Khan wish him a speedy recovery & preach Indians about Health and Hygiene
Next articleWhy do people say that Hinduism has no rules but also say, you can’t eat meat, etc.?
- Advertisement -