When would brutal action be taken against the cartel of leftists and terror outfit, SFJ, which succeeded to insult National Flag by hoisting its own Flag in front of one billion Indians? 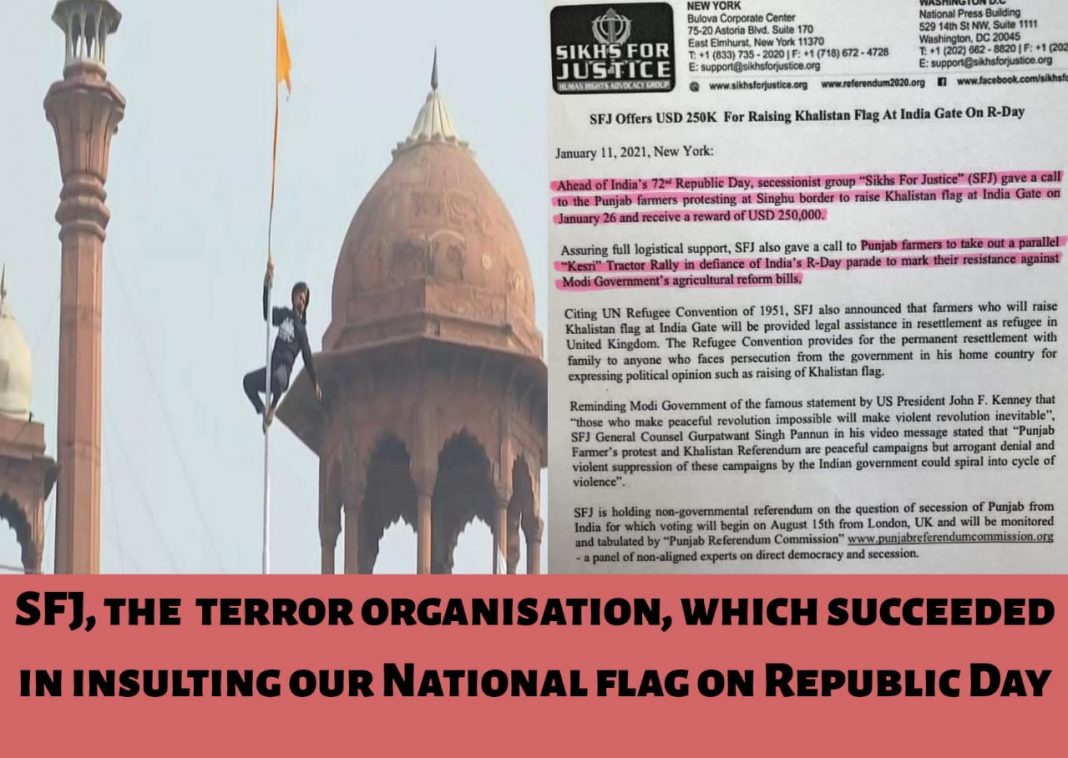 National Flag was desecrated in front of 1.3 billion Indians on Republic Day. What can be bigger insult to democracy on Republic Day than a Khalsa Flag being hoisted exactly where our National Flag is unfurled? What has Khalsa Flag to do with Farm Bills? It symbolises invasion. Every Indian is enraged. Hoisting of an illegal flag is psychologically overwhelming. It brought tears of anguish in Indians’ eyes.

Violence, anarchy, destruction of public properties, attack on policemen what Delhi is going through, today, is exactly what the banned outfit, Sikh For Justice (SFJ) had openly planned in advance. Sikh For Justice (SFJ), a pro Khalistani, outfit was banned under Section 3 of the Unlawful Activities Prevention Act in January 2020 for reviving ‘Khalistan movement’ in Punjab.

It may be recalled SFJ had organised a rally called “Punjab Referendum 2020” to liberate Punjab as a nation state at Trafalgar Square in London on 12 August 2018. In the rally, Sikh protestors issued “London Declaration” which seeks the Independence of Punjab, currently occupied by India. The rally was termed as a ‘failure because a counter-rally was carried out against SFJ conducted rally, on the other side of Trafalgar Square. Nationalist Indians in London waved placards with slogans including “Sikhs for a United India” and “We stand for one united India”.

The way SFJ invaded Red Fort desecrating  National Flag, today, they had asked Sikhs to occupy the Indira Gandhi Airport in Delhi in a bid to internationalise the issue in November 2020. They had also threatened to disrupt flights from New Delhi to London. Fortunately, heightened security mechanism prevented any untoward incident at IGI airport.

After their previous attempts failed, Sikhs for Justice (SFJ) had announced a reward of USD 2.5 lakh for those who would hoist a Khalistani flag at the India Gate on Republic Day.

While announcing 2.5 lakh US dollars, the designated terrorist Gurpatwant Singh Pannun, who founded SFJ in 2007, called on Sikhs in a video, “26 January is approaching. There is an Indian tricolour on Red Fort. Remove the tricolour on 26th of January and replace it with the Khalistan flag.” He further assured, “the laws of the world are with you. If the Indian Government punish you, your families would be brought to the foreign countries under the United Nations laws.”

Sikhs for justice has been making calls to the people from Punjab and Chandigarh to join the Khalistan tractor rally. SFJ had also threatened to cut off electricity supply to the national capital on 25th and 26th January, when they appealed to the farmers to target electricity companies owned by ‘Ambanis’ to ‘plunge Delhi into darkness.’

Farmers, who are called ANNADATA, food grain givers, are emotional subject in India. However, it is unlikely that farmers would display gross disrespect to laws, which were passed by a democratically elected government. But, then there are so called intellectuals, who always train their guns at the government by their attack.

It doesn’t take Einstein to understand it was never a farmers protests right from beginning. However, what Delhi witnessed today must be an eye opener for those who had believed the optics of Khalistan movement in the form of farmers protest against Farm Bills.

Be it Shaheen Bagh sit-in protest from 11 Dec 2019 to 24 Mar 2020, which culminated to break out anti Hindu riots in North Delhi on 23 February 2020 claiming more than 50 innocent lives, or be it Khalistan Movement in the form of Farmer Protests, which started from 26 November 2020, the agenda remains the same. How to discredit, demoralise and destabilise the largest democracy on the planet. How to create false narratives of democracy is in danger in India.

The cat is out of the bag. They are neither Indians nor farmers. They insulted national pride of more than a billion Indians by throwing National Flag, which beats in every Indian’s heart, to hoist an alien flag, which was not meant to be there. Can one billion plus Indian expect a brutal counter action from establishment so that no power can dare to insult the National Flag?