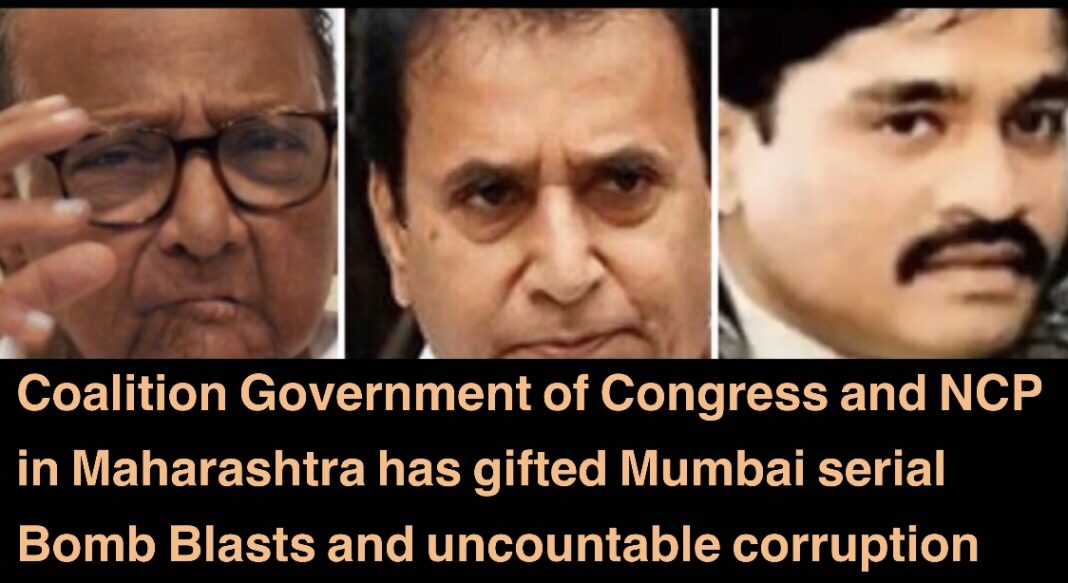 When Param Bir Singh claimed Maharashtra Home Minister, Anil Deshmukh had asked suspended API Sachin Waze to collect Rs 100 crores every month from bars and restaurants, Deshmukh reminded how East India Company, during famine in Bengal in 1770-1773, was brutally collecting taxes from hungry farmers and malnourished citizens, instead of providing as much relief to starving citizens as possible.

Business crumbled during Lockdown. Shops were forced to be closed. People not only died of Covid-19 in Maharashtra, which has 40% Corona death rate in the country, but also committed suicide because of depression. Survivors are fighting to make both ends meet. Mumbai’s lifeline, local trains were shut, due to Corona pandemic, affecting all kinds of small and big businesses. When citizens in Maharashtra are still suffering endlessly, Mumbai Police Chief reveals Home Minister is running a 100 crores extortion racket per month using the police as his collection agent. Isn’t Anil Deshmukh worse than officials of East India Company torturing common citizens?

Are Home Minister’s resignation, which is being demanded and Police Commissioner’s transfer enough to clean the system? Is it possible that Chief Minister Udhav Thackeray was not aware and, or was not involved in multi crores extortion rackets? Did it start with Scorpio laden with explosives parked outside Mukesh Ambani’s house Antillia with a view to demand extortion money from India’s richest man, Mukesh Ambani?

No, Anil Deshmukh is not the first NCP leader to demand Rs.100 crores extortion money from Mumbai city. Maharashtra has been milch cow for Congress Party and Nationalist Congress Party since ages. Whenever there is coalition government at Maharashtra of NCP and Congress, NCP makes sure to get Home Ministry with an intention to extract money, even if they had to compromise safety and security of Maharashtra specially, Mumbai city.

It was RR Patil, an NCP leader, who was Home Minster during 26/11, when 10 terrorists from across border had attacked Mumbai city butchering more than 250 innocent citizens. Maharashtra still remembers, when RR Patil had downgraded butchering of more than 250 people by saying, “small incidents like 26/11 do happen in big cities.

Ex R&AW officer NK Sood revealed, in an interview to Defensive Offence in 2019 that Sharad Pawar had unholy nexus with the dreaded gangster, Dawood Ibrahim. It is to be recalled that Sharad Pawar was Chief Minister of Maharashtra, when serial bomb blasts had ripped apart Mumbai at 12 places on 12 March 1993. 250 people were dead with 700 injured. However, some news reports the death toll was over 300, and the number of injured stood at 1400.

But, then CM Sharad Pawar lied to the nation that 13th blast rocked in a mosque. Why did he lie about 13th blast, which didn’t blast in any mosque?

Sharad Pawar lied about 13th blast in mosque so that needle of suspicion could be directed towards LTTE, instead of Dawood Ibrahim and Pakistan, because 12 serial bomb blasts had rocked Hindu dominated area in Mumbai. However, Dawood Ibrahim was found to be culprit behind serial bomb blasts. When investigative agencies asked the government to seize the property of Dawood, Sharad Pawar defended him by asserting he had no properties in Mumbai.

Ex R&AW officer NK Sood further said that Sharad Pawar helped Dawood to escape away to Dubai and Pakistan. To hide his links with Dawood, Sharad Pawar did not facilitate Dawood’ return to India, when he had offered. Covering up bomb blasts, defending dreaded terrorist like Dawood Ibrahim, belittling terror attack of 26/11 has been untold party manifesto of NCP.

Who can forget Adarsh Housing Society scam in which a multi-story building had been built in Colaba in South Mumbai for 1999 Kargil war heroes and war widows. In 2010 it was found out that several apartments worth of Rs. 8 crores in 2010, were allegedly bought at a tenth of price by relatives of bureaucrats and politicians—registered in the names of proxy owners.

After taking over investigation, the Central Bureau of Investigation (CBI) registered an FIR in 2011 against 14 people including the then Maharashtra Chief Minster Ashok Chavan, for criminal conspiracy under IPC Section 120 and various sections of the Prevention of Corruption Act. The then CM Ashok Chavan was made to resign from office. Ashok Chavan was also accused of illegally approving allotment of 40 per cent of flats to civilians. Adarsh Housing Society Scam is the tip the iceberg as far as corruption during Congress rule in Maharashtra is concerned.

Whenever Congress and Nationalist Congress Party have made government in Maharashtra, there has been incalculable amount of corruption, serial bomb blasts and terrorists have been allowed to escape. Anil Deshmukh demanding extortion money of Rs. 100 crores using police as his collection agent is untold party manifesto of NCP and Congress both.

Manisha Inamdar
Previous articleIs it end game for MVA in Maharashtra ?Will the car full of explosives lead to a political explosion?
Next articleTurkey’s misadventures in EU and Kashmir
- Advertisement -