Turkey’s misadventures in EU and Kashmir 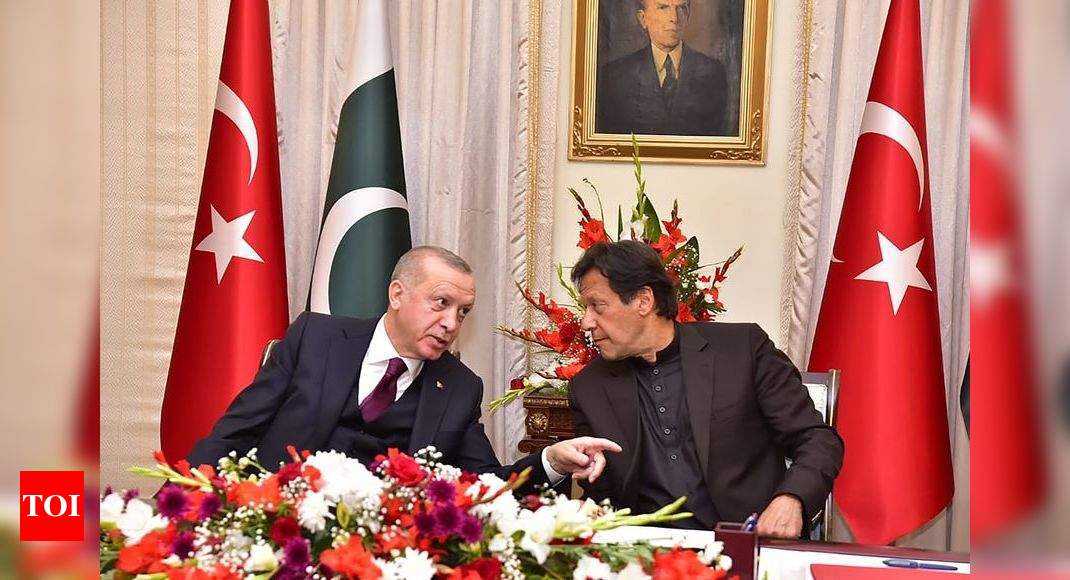 There is an epoch saying that “Dreaming is always free” and “There is no bar on the number of dreams, which any individual can see”. This quote fits the President Recep Tayyip Erdoğan of Turkey. After the failed coup attempt against the then Prime Minister Erdoğan in 2016, now President Erdogan has emerged victorious in a very aggressive and ruthless manner.

His idea of Turkey is standing in conflict with what the founding fathers of Turkey thought. Turkey recognised India right after its declaration of independence on 15th August 1947 and diplomatic relations were established between the two countries. Both the countries are members of the elite G20 Group of the top 23 major economies of the world, where the two countries have been indifferent on the management of the world economy. The victim of his aggressive policy is not just India but USA, Saudi Arabia, UAE, Israel, Greece and France and his policies are not liked by NATO leaders. Turkish President Recep Tayyip Erdogan has criticised his US counterpart Joe Biden for calling Russian leader Vladimir Putin a “killer,” saying that such statements about a head of state are “not fitting of a president.” Erdogan’s statement comes despite Turkey’s status as a NATO member, with Ankara appearing to take the side of Moscow over Washington. “Biden’s statements about Mr. Putin are not fitting of a president, and a president coming out and using such remarks against the president of a country like Russia is truly unacceptable, not something that can be stomached,” Erdogan said. “In my opinion, Mr. Putin has done what is necessary by giving a very, very smart and elegant answer.”

What is President Erdogan’s day dream?

His dream is to revive the ‘Sick Man of Europe’ (i.e. Ottoman Empire) back to its old glory. He wants to establish the old desecrated Caliphate. In order to fulfill this, he wants to gather sympathy from the Muslims all across the world. He wants the title of Caliph of the Muslim world, thereby Ummah! Ummah is an Arabic word meaning “community”. It is distinguished from shaʻb, which means a nation with common ancestry or geography. Thus, it can be said to be a supra – national community with a common history. It is a synonym for ummat al – Islām; it is commonly used to mean the collective community of the Islamic people. The Constitution of Medina (also called the Umma Document) is a political agreement between Muhammad, the early Muslims, the Jews of the city and other pagan tribes around the year 622 AD, its purpose to the city’s tribal warfare and “unify its warring factions”.

Pakistan is the largest Muslim country in the world (Technically, Indonesia has the largest Muslim population, but the constitution of Indonesia identifies it as a secular country). In order to gather the support from Pakistan, he always raises the issue of Kashmir in global fora or in OIC meetings. This public relation stunt helps both (Turkey and Pakistan) the governments to fulfill their agenda. In contemporary times, relations between India and Turkey have been strained due to Turkey’s religious mutuality with Pakistan. Until recently, Turkey was a vocal advocate of Pakistan’s position on the Kashmir dispute. Turkey was also one of the few opponents to India’s inclusion into the Nuclear Suppliers Group (NSG Group). It also opposes India becoming one of the P9 countries along with Germany, Japan and Brasil. This will change after the policy statement of General Bajwa in the Pakistan Dialogue and Pakistan’s desire to have peace with India and call of mutual ceasefire on LoC, recently.

Does President Erdogan really cares about Muslims in his country?

Erdogan is an astute and cunning politician and on one thing where many of you might agree or not but politicians are great opportunist. They only work for their self – interest and benefits. Like other politicians, President Erdogan’s policy also has many double standards. In Turkey, he has put huge restrictions on his fellow Muslim citizens, just because they are of Kurdish ethnicity. His establishment has never criticised the situation of the Muslims in China. These are just a few of the examples. He does not care for the Uighur Muslims either which are being badly dealt with by Mainland China. He even proposed to deport some Uighurs back to China who wanted to seek asylum in Turkey. Most Muslim nations are scared to raise a voice against President Xi.

Trade and political relations with India

In the 2019 UNGA (United Nations General Assembly), President of Turkey and Prime Minister of Malaysia were the only two heads of government, who raised the issue of Jammu and Kashmir. These countries have not liked that Article 370 and 35A was abrogated on 5th August 2019 and this erstwhile state has now become a Union Territory and all 4 Rajya Sabha MP’s have now retired. Already a ‘Delimitation Commission’ is working and will soon give its report for defining new Vidhan Sabha boundaries and number of seats of the valley and the Jammu region, including the seats of the Pak Occupied Kashmir and it is hoped that injustice done to the Jammu region will be now be corrected. India unofficially imposed many restrictions on the palm oil imports from Malaysia, which caused great losses and gains for the Indonesian economy, but India didn’t took any trade related actions against Turkey.

The reason was that India enjoys a trade surplus against Turkey.

The current relations between Turkey and India are not at its best and it seems very unlikely that the Turkic policy under President Erdogan is going to change anytime soon. The best way forward would be to have good trade relations and initiate a dialogue so that both countries can address their grievances. Turkey was deserving & should logically have been granted membership of EU. But its rejection has lead Erdogan to try install Turkey as the head of an Islamic confederation of nations as the earlier Ottoman empire was. Kashmir is internal matter of India and India also follows same policy while dealing with Cyprus and Armenian claims against Turkey✌. It does. India had neutral position in the whole Armenia situation and India doesn’t recognises Northern Cyprus only because it’s not an UN member (same goes for Kosovo. Not a UN member: no official recognition). India need not give any importance to Turkey. Let Erdogan try to fulfill its dream in Syria, Iraq or Libya.

India is not Armenia let Turkey make its misadventure in Jammu & Kashmir and suitable reply is awaiting for it.