Untold story of “Division of Bengal” in 1905, which was supported by Muslims in Bengal succeeding ‘Divide and Rule’ by British 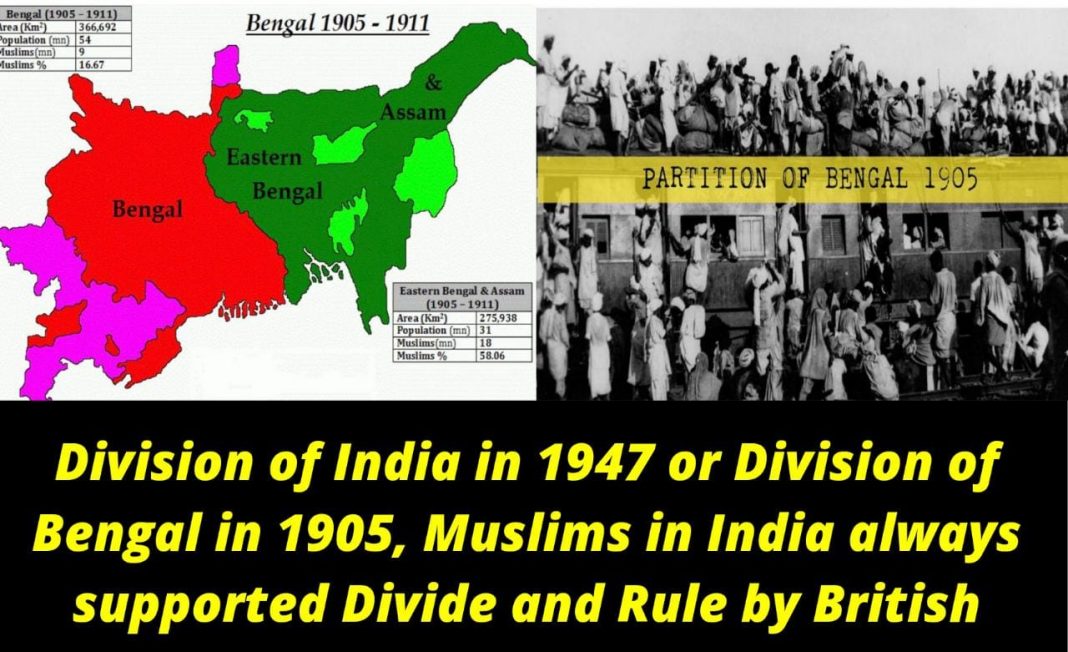 Did Muslims in British India demand division of India for a separate nation for themselves for the first time in 1940, which materialized in 1947 as Pakistan?

After five centuries of Islamic rules, Bengal was the first to fall to another wave of invaders. It came under British East India Company’s rule after Company’s decisive victory over Siraj-ud-Daulah, Nawab of Bengal, in Battle of Plassey, at banks of Hoogly river, in June 1757. After mass conversion and brutalities during Islamic rules for five centuries, Bengal began to suffer exploitation and oppression in form of ruthless economic agenda by East India company after 1757.

India had suffered uncountable famines, but the worst hit region was Bengal during British era. Famine engulfed Bengal in 1770, followed by severe ones in 1783, 1866, 1873, 1892, 1897 and last in 1943-44. The first famine in 1770 was so brutal and ghastly that it went on till 1773 having killed one crore people. It had wiped out one-third population of Bengal. However, instead of providing as much relief to stricken farmers and hungry citizens as possible, British East India Company was irritated at the delay and inconvenience in taxation caused by famine, which had occurred due to delay in monsoon along with exploitation of the country’s natural resources by the Company for their own financial gain.

After 1857 Mutiny, even if power over India was transferred from East India Company to British Crown on 2 August 1858, British continued to exploit farmers and citizens in every famine till 1897. Mismanagement, exploitation and indifference towards natural calamities had planted seeds of discontents growing into a huge tree among Bengali population, due to which Bengal had become nerve center of revolution against British. In another words, Bengal had become epicenter of nationalism in India.

With a goal to weaken the movement, Lord Curzon—who was Viceroy of India from 1899 to 1905–proposed partition of Bengal. Curzon claimed Bengal was too big to be governed effectively. Indeed, Bengal Presidency, which was the largest province of British India then, comprised West Bengal, Bihar, Orissa, Assam and parts of Chhattisgarh as well as today’s Bangladesh with population of around 8 crores people. But, partition of Bengal was based on religion and political agenda.

On 16 October 1905, Bengal had been divided into two new provinces; Western Bengal with Bihar and Orissa and Eastern Bengal and Assam with Dhaka as its capital, despite widespread oppositions by Hindu community. This is how Lord Curzon reduced the nationalist movement in Bengal by separating the largely Muslim dominated eastern areas from the largely Hindu dominated western areas.

It is important to remind that Herbert Hope Risely, the then Home Secretary to the British Government in 1904, who had also played pivotal role to split Bengal on communal line, had officially admitted: Bengal united was a power. Bengal divided would pull in several different ways. That is what the Congress leaders feel, their apprehensions were perfectly correct and they form one of the great merits of the scheme…. One of our main objects is to split up and thereby weaken a solid body of opponents to our rules.  This was the formula Lord Curzon followed.

What was shocking and demoralizing for growing revolution in Bengal was that “Partition of Bengal” was supported by Muslims in Bengal. Muslims of Bengal claimed their economic conditions in East Bengal was poor, and they believed businesses and governance were dominated by Hindus in West Bengal.

Irony is that Hindus had lost their king and their influences after Bakhtiyar Khalji conquered Lakshmana Sena in 1203. Bengal had Islamic rule for five centuries. Nevertheless, Muslims continued to play victim cards for being marginalized. But, the real characteristic was whenever Muslims grew in majority, they had demanded a country for themselves by playing victim card.

Amid partition of Bengal, Hindu protests exploded, as the Indian National Congress began the Swadeshi movement, which is now called “Make in India,” on 7 August 1905 at the Calcutta Town Hall. But, Swadeshi Movement was not supported by Muslims of Bengal as they expected a separate region would give them more control, hence they opposed the movement.

Political protests continued and the two parts of Bengal were reunited in 1911, while Bihar and Orissa were separated to form a new province.

In 1906, the All-India Muslim League popularly known as the Muslim League was founded with sole ideology to establish a separate Muslim-majority nation-state, Pakistan, which was materialised in 1947.

It was not only in 1947, when Muslims of India succeeded to form a country for Muslims, Pakistan, but Muslims of Bengal wholeheartedly supported division of Bengal at the cost of puncturing nationalist movement against British by playing victim card of being marginalised, even if Islamic invasion and their rule continued for more than five centuries.

Manisha Inamdar
Previous articleWho is Sachin Vaze? Why Maharashtra Government is deliberately shielding their ‘Black Sheep’
Next articleBollywood must be subjected to Income Tax and other scrutinies.
- Advertisement -