Twelve things that will disappear in Our Lifetime! 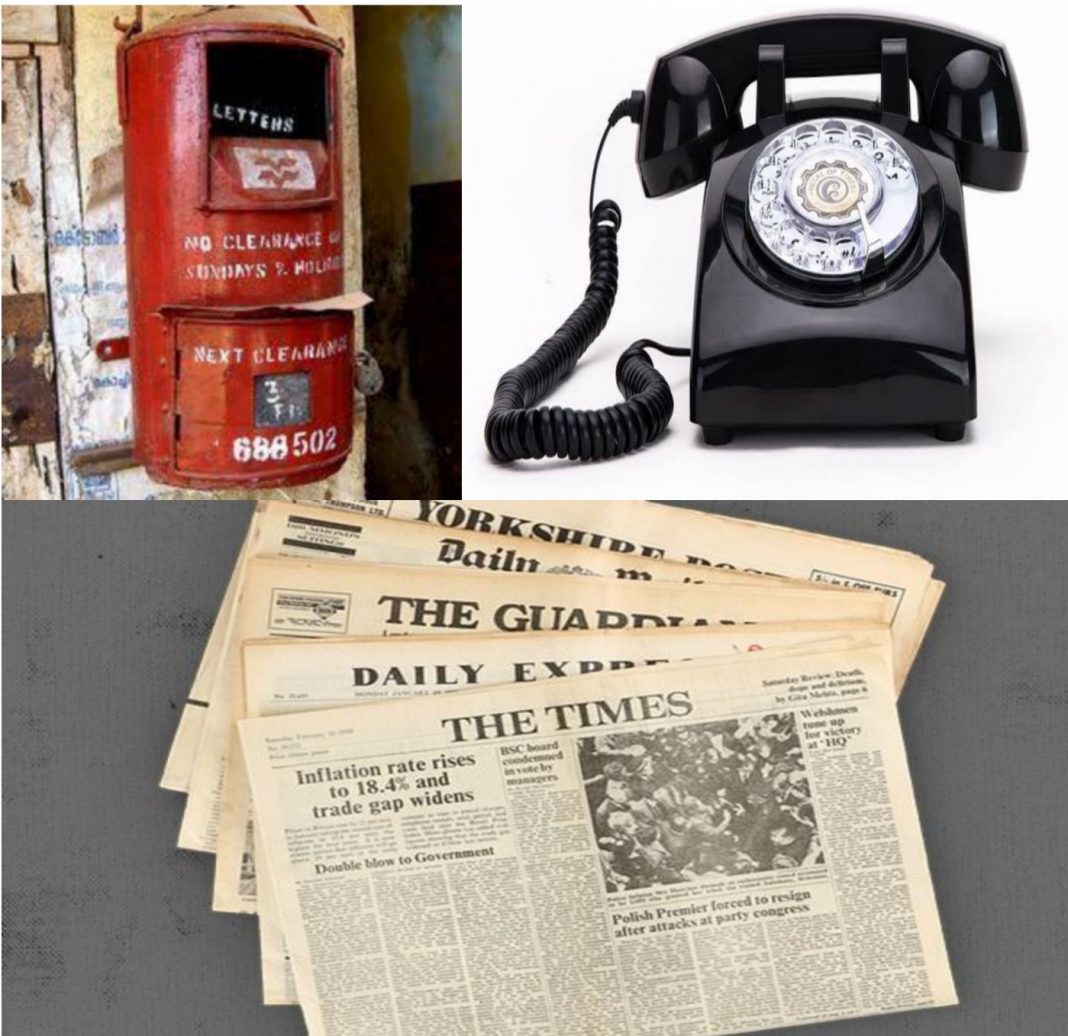 The pace with which, the life is changing gears is enormous. Technology is changing and replacing humans, a maid to sweep the floor is being replaced by a small robot and costs just 19,000 rupees and so does the paradigm of services, which we use and society changes its form and tools. I foresee major changes in the hierarchy and norms. I foresee major sociological changes in our society. Some icons will be replaced forever.

The Post Office: Get ready to imagine a world without the friendly neighbourhood post office. They are in potential financial trouble that there is probably, no way to sustain it long term, and is getting converted into bank and support service providers. They have become the last mile service delivery centres of Amazon and Flipkart. Poor man’s post card, which was 100% sure to reach its destination has got extinct. Email, FedEx, DHL, and UPS have just about wiped out the minimum revenue needed to keep the post office alive. Most of your mail every day is junk mail and bills.

We have already written the obituary of telegram and its number codes. Similarly we will write the obituary of money order. They were the lifeline of woman folks in villages of Uttarakhand, Bihar, Jharkhand and parts of Chhattisgarh. Men folks used to send money orders to their wives and my college life depended on money order from my father. Registered post is almost extinct now, but I still use it for sending important letters. No one uses inland letters and envelopes. They will be seen in postal museums. Similarly postal orders are making way for PayTM and PhonePe. Money order economy was a term used to be common nearly 10 years back.

The Cheque: Britain is already laying the groundwork to do away with cheque by the year 2022. It costs the financial system billions of dollars a year to process cheques. Plastic cards and online transactions will lead to the eventual demise of the cheque. This plays right into the death of the post office. If you never paid your bills by mail and never received them by mail, the post office would absolutely go out of business.

The Newspaper: The younger generation simply doesn’t read the newspaper. They certainly don’t subscribe to a daily delivered print edition. That may go the way of the milkman and the laundry man and replaced by Grofers and other delivery services. As for reading the paper online, get ready to pay for it. The rise in mobile Internet devices and e-readers has caused all the newspaper and magazine publishers to form an alliance. Micropayments payment protocols are used for such subscriptions. They have met with Apple, Amazon, and the major cellphone companies to develop a model for paid subscription services. They have become thinner and thinnest during the China virus pandemic.

The Book: You say you will never give up the physical book that you hold in your hand and turn the literal pages. I said the same thing about downloading music from the iTunes. I wanted my hard copy CD. But I quickly changed my mind when I discovered that I could get albums for half the price without ever leaving home to get the latest music. The same thing will happen with books. You can browse a bookstore online and even read a preview chapter before you buy. And the price is less than half that of a real book. And think of the convenience! Once you start flicking your fingers on the screen instead of the book, you find that you are lost in the story, can’t wait to see what happens next, and you forget that you’re holding a gadget instead of a book.

The Land Line Telephone: Unless you have a large family and make a lot of local calls, you don’t need it anymore. Most people keep it simply because they’ve always had it. But you are paying double charges for that extra service. All the cellphone companies will let you call customers using the same cell provider for no charge against your minutes. JIO provides a fibre to the home with all value added services for a very cheap rate.

Music: This is one of the saddest parts of the change story. The music industry is dying a slow and painful death, not just because of illegal downloading, it’s the lack of innovative new music being given a chance to get to the people who would like to hear it. Greed and corruption is the problem. The record labels and the radio conglomerates are simply self-destructing. Over 40% of the music purchased today is “catalogue items,” meaning traditional music that the public is familiar with. Older established artists. This is also true on the live concert circuit. To explore this fascinating and disturbing topic further, check out the book, “Appetite for Self-Destruction” by Steve Knopper, and the video documentary, “Before the Music Dies.”

Television Revenues: The television network revenues are down dramatically, not just because of the economy, but people are watching TV and movies streamed from their computers and they’re playing games and doing lots of other things that take up the time that used to be spent watching TV. Prime time shows have degenerated down to lower than the lowest common denominator. Cable rates are skyrocketing and commercials run about every 4 minutes and 30 seconds. It’s time for the cable companies to be put out of our misery. Let the people choose what they want to watch online and through Netflix and other OTT services, but it needs regulation, for sure.

The “Things” That You Own: Many of the very possessions that we used to own are still in our lives, but we may not actually own them in the future. They may simply reside in “the cloud”. Today your computer has a hard drive and you store your pictures, music, movies, and documents. Your software is on a CD or DVD, and you can always re-install it if need be. But all of that is changing. Apple, Oracle, Microsoft and Google are all finalising up their latest “cloud services”. That means that when you turn on a computer, the Internet will be built into the operating system. So, Windows, Google, and the Mac OS will be tied straight into the Internet. If you click an icon, it will open something in the Internet cloud.

If you save something, it will be saved to the cloud. And you may pay a monthly subscription fee to the cloud provider. In this virtual world, you can access your music or your books, or your whatever from any laptop or handheld device. That’s the good news. But, will you actually own any of this “stuff” or will it all be able to disappear at any moment in a big “Poof?” Will most of the things in our lives be disposable and whimsical? It makes you want to run to the closet and pull out that photo album, grab a book from the shelf, or open up a CD case and pull out the insert. The time for destructive technology has come. Thus camera and photographic equipment died and mobiles had cameras, photocopying giants Xerox and many Xeroxing companies went into oblivion and scanner cum printer was evolved.

Joined Handwriting (Cursive Writing): Already gone in some schools who no longer teach “joined handwriting”, because nearly everything is done now on computers or keyboards of some type (pun not intended). Thank God I learned typing in a formal institute.

Passwords: Passwords became an integral part of our daily life. Our emails, mobiles, subscription based services, eCommerce based services, Facebook and bank online transactions needed passwords. Then came one time passwords, called OTP entered our daily lives. Further multi factored authentication increased security but now our laptops with able to recognise their owners through biometric attributes, and the world famous ‘Jhamtara’ gang will go out of business for some time. Technology will prevail in future.

Banks: During the Corona period, individuals never went to banks very often and helped control the China Pandemic. Banks are realising that HNIs will be sent money to their homes, a welcome change for older generation to sit at home and enjoy the retired life. Therefor people will not go to banks but banks will come home for sure. Newer payment technology has ensured that kids of the younger generation will never go to banks. Amazing since my father used to every week go to banks and update his and my mothers’ passbook.

Privacy: If there ever was a concept that we can look back nostalgically, it would be privacy. That’s gone permanently. It’s been gone for a long time anyway. There are cameras on the street, in most of the buildings, and even built into your computer and cell phone. But you can be sure that 24/7, “They” know who you are and where you are, right down to the GPS coordinates, and the Google Street View. If you buy something, your habit is put into a zillion profiles, and your advertisements will change to reflect those habits. “They” will try to get you to buy something else. Again and again and again.

All we will have left with ourselves that, which can’t be changed…….are our “Memories”.