This is FASCISM-Shiv Sena goons beaten an Ex Navy officer, because he shared a meme of Uddhav Thackeray 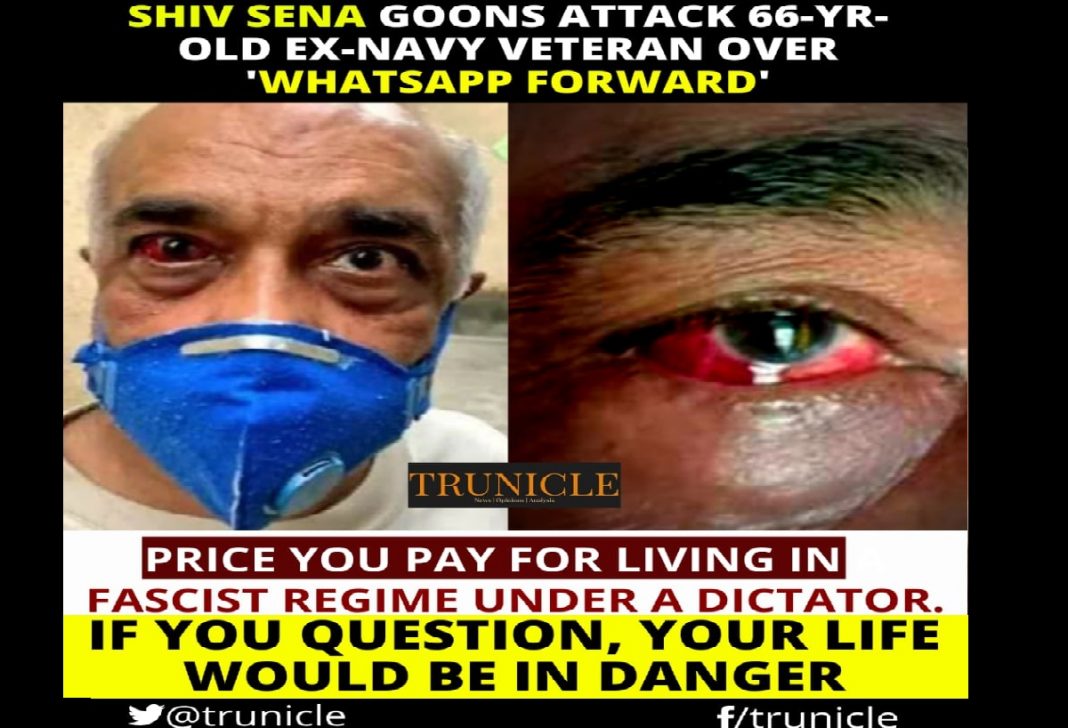 It seems Shivsena has decided to go down in history as a political party which ruled by goons. The Sushant Singh case is still going on, the brouhaha created by the illegal demolition of Kangana’s office is yet to be settled and Shiv Sena has done something which is going to hurt them for a long long time.

In the latest development, Shiv Sena members beat a retired naval officer in Mumbai forwarding a cartoon mocking Chief Minister Uddhav Thackeray. EX Navy office Madan Sharma’s images are spread like a wildfire all over the media, which shows wounds on his face and a bloodshot eye. The 65-year-old Veteran was attacked near his home in Kandivali East. An FIR has been registered in the case and couple of people have been arrested as well.

Mr Sharma, in his complaint, said he had forwarded the cartoon to his residential society’s WhatsApp group. He later received a call from one Kamlesh Kadam, who asked his name and address. In the afternoon, he was called outside the building and was attacked by a group Shiv Sena goons.

The CCTV footage that is being widely shared shows the former officer being thrashed by shiv Sena goons. Mr. Sharma is seen walking to the main gate of his apartment building and after a few moments, he was rushing back inside the society with a group of men chasing him. They drag him by his shirt and are seen punching him on his face.

This act has been slammed by everyone, several BJP leaders, including former Chief Minister Devendra Fadnavis, posted a photo of an injured Madan Sharma and put his message that “Extremely sad and shocking incident. A retired Naval Officer got beaten up by goons because of just a WhatsApp forward. Please stop this GundaRaj Uddhav Thackeray ji. We demand strong action and punishment to these goons (sic),” Mr Fadnavis tweeted.

A BJP MLA Atul Bhatkhalkarput the video on his twitter handle and slammed Chief Minister Uddhav Thackeray over the incident.

The ruling Shiv Sena which showed what the real fascism is. They have shown their masculinity by demolishing the office of actor Kangana Ranaut has now beaten a retired Navy officer. There is no doubt that Uddhav Thackeray is running the Fascist government from Matoshri and his cadre behaves like goons who are always up in arms to beat anyone who opposes their ideology.

The irony is, the Shiv Sena’s founder Sh. Bala Saheb Thackeray was himself an established Cartoonist, who used to show the plight of common man by using his cartoons. The party under his son is beating people for sharing cartoons and political meme. This is beyond a disappointment.