The saga of The Birth of God Ganesha. 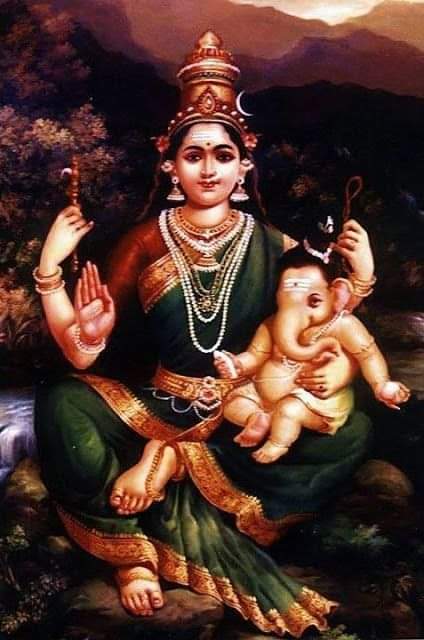 “She scrubbed her skin with Sandalwood paste, scraped off the dead cells, mixed it with turmeric and moulded a beautiful boy into which she installed life.” This is how our Puranas describe the birth of Ganesha.

Let us begin with the story before this event. Gajasura was an ardent devotee of Maharudradeva. He did penance and asked Maharudradeva to dwell in his stomach. Maharudradeva took the form of a Linga and the Asura swallowed it. The Layakaraka (I could not find an English word for Laya) was absent so dissolution was stalled. When all the Devas started praying to Maharudradeva, he burst out of the stomach of Gajasura. The Asura understood his grave mistake of gulping one of the Trinity and hampering the creation. Gajasura begged for forgiveness and requested thus, “Now that you have burst out of my body only my head is intact, everyone should remember my head and you should wrap your body with my skin.”
Meanwhile Parvathidevi in Kailasa was preparing herself for a bath. She didn’t want anyone to disturb her and moulded a young boy and did Prana Pratista (installation of life force). She asked him to stand guard at the door. Maharudradeva came to Kailasa after a long stay in the belly of Gajasura. He was confronted by the young lad at the door. Not allowed inside Maharudradeva angrily threw his trident at the boy which severed his head.
Now why did Maharudradeva who is known for being calm by practicing meditation get agitated???

Here Bhagavan Vyasa reminds us of the story of Maali and Sumaali the two demons brothers who fought with Suryadeva. Being the devotees of Maharudradeva the brothers pleaded him to intervene. Maharudradeva struck Suryadeva with the trident and this made the entire world plunge into darkness. Kashyapa the father of Suryadeva cursed Maharudradeva, “Just as you pierced my son’s chest with a trident, you will one day pierce the head of your son with that trident.”

2 + 2 is 4 and the curse unfurls and the young boy to whom Maharudradeva was father was killed. Parvathidevi insisted her husband bring the little boy back to life and now the elephant head of Gajasura was used for transplantation. We all know the rest of the story.
The outermost layer of our skin is composed of dead stratified squamous, keratinized epithelial cells. Science today says that cloning is possible with epithelial cells. Never know if Parvathidevi used her epithelial cells to clone Ganesha. In fact as per our scientific knowledge clones are the identical copies of donors of cells, if so clone developed from the cell of a male will be a male and if developed from a female cell it will be a female. Parvathidevi created Ganesha who is of opposite sex by using the genetic engineering to alter the genes in a cell, which the science may come up with this technology in future.

Whatever may be the science behind the creation of Ganesha, I wish to contemplate it from the spiritual angle. The dead cells from the body of Parvathidevi were mala (Dirt). We humans have Ego as dirt in our mind. Maharudradeva who is Consciousness beheads the ego with a little head and installs a bigger head which is awareness. Small head is narrow thinking, selfish thinking and being avaricious it has to be replaced by a head which has broad thinking, selfless thinking and being generous. This is more helpful to excel and move on further instead of being stuck with the arguments of those who have pride in identifying as devotees of Ganesha and those who call themselves atheists.
May Gowri Maa bestow auspiciousness to the entire mankind.

Sreeram Manoj Kumar
Previous articleProf Priyamvada Gopal: Why Cambridge University has such a ‘Rabid Hindu Hater’ onboard?
Next articleSylhet Referendum 1947; A BIG betrayal that led to Sylhet being lost to Pakistan and created a divide between Assamese & Bengalis
- Advertisement -