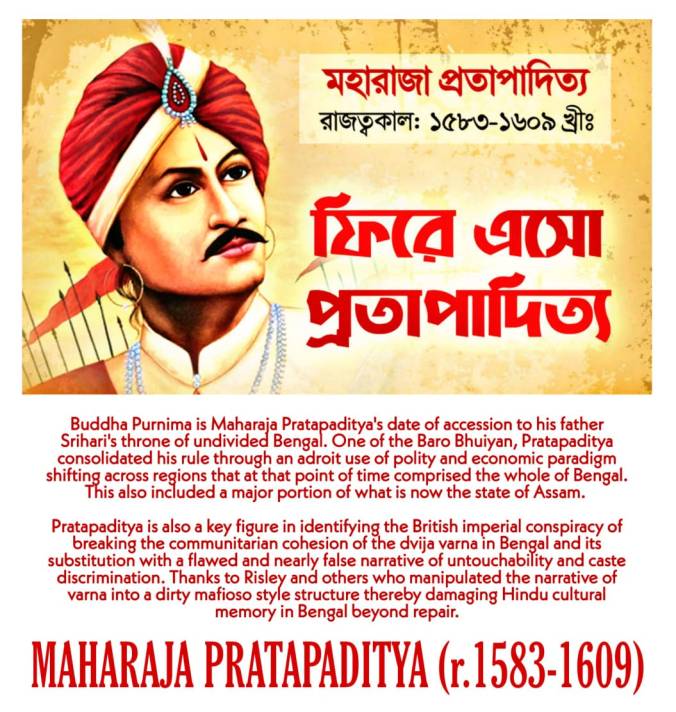 Before the history & legend is shared I would encourage all to see the Bengali Feature Flim Bou Thakuranir Ghat (1956) starring Nitish Mukherjee as Maharaja Pratapditya, The Legendary Uttam Kumar as Udayaditya his eldest son & Pahari Sanyal as Raja Basant Ray, which is an accurate representation of history.

The patron deity of Jessore was Jashoreshwari. According to popular legend, one morning a general of the Maharaja Pratapditya, discovered a ray of light emanating from a nearby forest. When he was informed, he went to investigate the source of the light rays. Deep inside the jungle he found an idol of Mother Kali, that was emitting the light. He at once realized that it was the idol of the patron deity, the protector of his kingdom and his people. So he brought the idol to his capital and constructed a temple so that she may be worshiped by the faithful. Later he was informed by the famed monks that She is none other than Mother Sati & what Maharaj has got is a part of the 51 Shaktipeeth.
Pratapaditya (প্রতাপাদিত্য) (1561–1611 AD) the Illustrious King & One of the Baro Bhuyian’s of Bengal was a Kayastha zamindar, and later, the Hindu king of Jessore, and among the most prominent of the Baro-Bhuyan on the Bengal region of the Indian subcontinent,who fought against the Mughal Empire. He ruled over a Hindu kingdom in Bengal, which, at its zenith encompassed the districts of Nadia, North 24 Parganas and South 24 Parganas in West Bengal, as well as extending into modern-day Bangladesh from Kushtia district in north, Barisal in east and Sundarbans and Bay of Bengal to south.
The first ruler of Bengal who was armed with a formidable Army, Cavalry, Navy, Archers & Elephants coupled with multiple forts built across Bengal at strategic places both around the Delta regions & inland which made them invincible even when attacked by a river route. Apart from these Pratapaditya had a network of spies. The majority of Pratapaditya’s army are Bengali Kaysthas, Rajputs, Portuguese Sailors and Afghan Muslims. There was a sizable number of Kuki and Arakaneese soldiers in his army. Also, Patapaditya had several Afghan officers in his service, including Jamal Khan, the son of Katlu Khan and Khwaja Kamal. His chief of strategic warfare was a Brahmin called Rudraditya Upadhyaya. He also employed many Portuguese officers during his battles against Mughals.
There were also three other places where Pratap built his shipyards and dockyards The first of its kind in India with the help of Portugese Navy these were Dudhali, Jahajaghata, and Chakasri, where his ships were built repaired and kept. His War Boats & Navy was so massive that it outnumbered the Mughals in quantity & quality.
It was the era of the Magg / Arakense Pirates (Jalodosshyu) who used to rule the Delta area’s of Sunderban & Bay of Bengal attacking the merchant & passenger ships/boats & plundering them & murdering ruthlessly. It was Pratapaditya who was the first king who dealt with them with an iron hand.by freeing the island of Sandwip from these Arakanese pirtes. The Island which had gained strategic importance because of its salt production, and because it was the most important gateway of trade in the Bay of Bengal and to Chittagong port.
However his ambitions knew no bounds & made the biggest blunder of his life by murdering his uncle Basanta Ray (Raja Basanta Roy Road in Kolkata) who affectionately had brought him up. When Mughal Emperor Jahangir, learned that Pratapaditya murdered his uncle Basanta Ray and declared himself as an independent ruler of Bengal, he sent Raja Man Singh with an army to keep Bengal under control.Descendants of Lakshmikanta claim that Raja Man Singh revered Basanta Ray greatly and after defeating Pratapaditya, he met his guru’s son, Lakshmikanta, And thus took place two bloody battles on the Delta plains & Waterways of Bay of Bengal.
As the Legend goes that the Divine Mother Jeshoreshwari appeared in Pratap’s dream & told him that She is leaving Jessore as she can’t stay anymore & with this dream Pratap lost the battles of Kagarghat & Salkal. Post his defeat The Idol of the Mother was taken away by Raja Man Singh along with Pratap as a prisoner, & he perished on the Way to Delhi in Varanasi.
Jeshoreshwari was renamed as Shila Devi by Raja Man Singh & placed in the Amer Fort in Jaipur. Till today after 450 years she is worshiped inside the Amer Fort, with animals being offered in the same manner & by the descendants of the same priests who used to worship her in Jessore.(Pictures shared). She was the strength & Shakti of Pratap & the moment she left the defeat was scripted. Till the late 18th Century before the British East India Company took control, the Maharaja’s of Jaipur before leaving for a battle would sacrifice an animal & pray to the Mother for Victory. Even today hundreds of Devotees pay their respect to the Mother@ Amer Fort daily for she is also one of the Altars of 51 Shaktipeeth’s of Mahamaya.
The decisive Battle of Kagarghat between Humayun’s Forces lead by Raja Man Singh & Pratapditya’s forces was fought near the confluence of Kagarghat canal and the Jamuna. He made a big fort at a strategic point and gathered all his available forces there. The Mughals began the battle by an attack on the Jessore fleet (Jan 1612) and compelled it to seek shelter beneath the fort. But their further advance was checked by the heavy cannonade of the Jessore artillery. A sudden attack of the Mughals completely defeated the Jessore fleet and they fell upon the fort with the elephants in front, thereby compelling Pratapaditya to evacuate the fort and retreat.The defeat sealed the fate of Pratapaditya. After his defeat, Raja Man Singh requested Lakshmikanta to ascend the throne, but he refused.Instead, Bhavanand Majumdar, who had been in the service of Pratapaditya as a Brahmin boy, was given the throne, and he subsequently became the founder of the Nadiya Raj family.
There is a trust & foundation today in the Memory of Maharaja Pratapaditya run from Kolkata. It will be wroth while to mention that Pratap’s fleet strength & invincibility was comparable with the legendary Rajendra Chola, KrishnaDeva Raya or even Tipu Sultan or Samrat Samudragupta.

Surya Roy
Previous articleBengal is land of King Shashanka and Pala Dynasty, not the land of Siraj ud-Daulah and Raja Ganesh, who allowed his son to convert to Islam to save his kingdom
Next articleAnother example of Islamic Bigotry – Akbar razed an entire Hindu-Jain city to built Fatehpur Sikri on top of it
- Advertisement -