THE ISLAND IN FLAMES: GENESIS OF SRI LANKA’S ECONOMIC CATASTROPHE 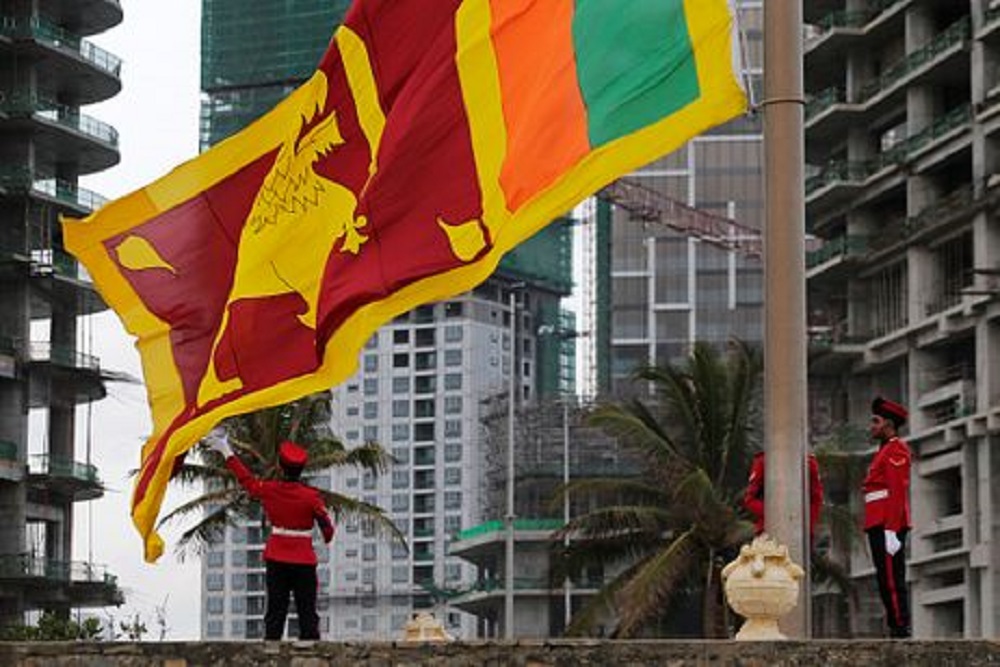 All essential commodities have dried up, supplies running out of stock, prices of food items have skyrocketed to levels witnessed never before, exams cancelled due to shortage of ink to print question papers, power supply snapped pushing the citizens into darkness amid the soaring temperatures and sweltering summers. People are seething with anger, hitting the streets asking the failed political leadership to quit by raising placards like ‘’Gota Go back’’. The protests have turned violent at many places leading to arsons and vandalism of public properties. The government response was chilling when it imposed indefinite curfew in the capital city to suppress the protesting citizens. As this article is being written, it is learnt that the entire cabinet of the beleaguered government has resigned barring the Prime Minister. The PM has sacked his Finance Minister and has asked the opposition to join the government. This is the poignant tragedy that has unfolded in India’s southern neighbour Sri Lanka.

What explains this unprecedented economic tragedy that has struck the island nation? There are a host of internal and external factors responsible for this ugly turn of events.

Collapse of the Tourism Sector:

Sri Lanka used to be a major tourist destination, blessed with its abundant natural beauty nestled on the shorelines of Indian Ocean. However, the infamous Easter Bombings of 2019 dealt a deadly blow to the thriving tourism sector, one of the major drivers of Lankan economy contributing to about 10 percent of its GDP. Then came the COVID 19 pandemic which further debilitated the fledgling tourism industry. Tourist inflows dropped by almost 50 percent. According to Asian Development Bank (ADB) report, revenue from tourism nosedived from $ 3 billion over the first eight months of 2021 compared to the same period in 2018.

Sri Lanka has been following a flawed economic policy all these years relying on imports of essential commodities like food items from abroad while exporting items like tea, textiles and rubber which resulted in a huge balance of payment (BoP) crisis. According to estimates, Sri Lanka’s exports were pegged at around $12 million whereas imports around $22 million. The Russia – Ukraine war further intensified the crisis. This plunged the nation into the throes of an irreversible economic catastrophe.

Sri Lanka has witnessed political instability despite making a nascent transition to democracy after the end of a prolonged era of civil war in 2009. The country has seen three presidents in a span of 11 years between 2008 to 2019. During Mahinda Rajapaksa’s first term, the government avoided multilateral loans from agencies like IMF as it came with certain conditionalities imposed. Instead he opted for high- interest bilateral loans to fund mega infrastructure projects like expressways, airports, ports, etc. However, many of these projects are yet to yield tangible financial benefits and are barely able to meet the operating costs. Sri Lanka is found wanting on democratic indicators and has a weak whistleblower protection law. Corruption is so widespread that Transparency International’s Corruption Perception Index puts Lanka at 102nd position among 180 countries. The arrogance and disconnect of the ruling elite has disenchanted and dismayed the public which admired them when the Gotbaya Rajapaksa regime stormed to power in November 2019 winning a huge mandate.

In its bid to revive the rural economy and pusue ‘’people centric policies’’, the Gotbaya Rajapksa government followed some misguided and ill advised policy decisions taken in haste. The most disastrous among them was the overnight shift to organic farming imposing a blanket ban on chemical fertilizers. The government justified this injudicious move as one directed against chemical imports. Famers were left shell shocked and the threats of a massive food insecurity loomed large. Far from achieving the stating object behind this abrupt shift to organic farming, the Lankan government has to pay $200 million as compensation to farmers.

What we are witnessing today was a crisis in the making. Experts and policy makers had already warned Sri Lanka of the likely consequences of its actions. However, the stubborn leadership refused to budge.

An economic emergency was already imposed since August 2020. FOREX reserves had declined to dangerous levels by November 2021. Trade deficit of Sri Lanka accounted for 116% of its GDP till March 2022. There was a 70% drop in foreign exchange reserves over two years and it was left with only $2.31 billion in its reserves, enough for a middle income country to collapse! Inflation had reached 15.1% by February 2022, a situation termed in economics as hyperinflation. Food inflation has touched 25.7%, leaving common men to struggle for even a packet of bread and milk powder. Shortage of cooking gas, fuels in filling stations and hospitals postponing critical medical services due to power cut has shoved the country into chaos and despair.
Such is the magnitude of Sri Lanka’s economic predicament that Bloomberg had predicted a probability of 27.9 % in loan default by Sri Lanka compared to 13.6% by Pakistan, another South Asian neighbour grappling with political instability and terrorism.

The Sri Lankan leadership was always ambivalent towards borrowing from multi lateral lending institutions like IMF because it was skeptical of the conditions imposed by these loans, with East Asian Crisis of 1997 and Tequila effect of Mexico serving as precedents. As a result, Sri Lanka kept borrowing repeatedly since 2007 leading to $11.8 billion worth piled up. Since the end of the ethnic war in 2009, Sri Lanka was struggling to keep its economy afloat.FDI inflows also steadily depleted. This also had to do a lot with Sri Lanka’s domestic economic management which did little to make the economy self reliant and invest in manufacturing and innovation.

The direct consequence of Sri Lanka shunning IMF loans was emergence of China as the biggest bilateral lender to the island nation. But China had its own agenda. Beijing’s lending to Colombo was part of its larger geopolitical and strategic design of encirclement policy or what is popularly known as the ‘String of Pearls’ theory. China intended to challenge India in later’s sphere of influence,ie. South Asia by forging friendly ties with smaller neighbouring countries and ultimately creating suspicion against New Delhi amongst these countries.
However, China’s helping hands had more to it than what Sri Lanka could have anticipated. China follows a policy of Debt Trap Diplomacy whereby it extends loans and credits in excess of the borrowing country’s capacity to return. Thus the poorer, less developed countries are ensnared by the dragon to forfeit the claim over the natural and strategic resources of their country. China thus gets access to the resources and infrastructure of the debtor country. Many African countries are victims of China’s Debt Trap Diplomacy. In April 2020, China extended USD 500 million loan to Lanka and has since then emerged as the largest bilateral and FDI provider to the country. Sri Lanka also realized soon that it couldn’t repay the loan and hence it leased out Hambantota Port to China on a 99- year lease to raise USD 1.2 billion. This has raised red flags about the downside of China’s multi- billion Belt and Road Initiative (BRI).

Response of India to the crisis:

As a responsible neigbour, India has extended humanitarian help to Colombo by extending a $1 billion credit facility through its Neighbourhood First Policy. Although India and Sri Lanka have enjoyed warm relationship historically and have shared historical and cultural legacies, the emergence of China as a significant player in the region has antagonized New Delhi. However, the crisis has proved to be an opportunity for both countries to mend their fences. Its time Sri Lanka must acknowledge that India is a far more reliable neighbour and trustworthy partner than any one else. It must reciprocate in a similar fashion.
India too has stakes in Sri Lanka as any sort of crisis and anarchy in the neighbourhood could have a spillover impact on the Indian territory, given our past political experience vis-à-vis Sri Lanka. Hence, restoration of normalcy and stability in the island is critical to the strategic calculus of India. This is also the right time for New Delhi to reset the ties with Colombo in order to isolate Beijing and ward off the potential irritant in the region.

Sri Lanka is passing through the most turbulent phase of its history, a lingering economic calamity and a simmering socio political upheaval. The recovery would happen, but not anytime sooner. This has a lesson for all countries across the globe. Responsible political leadership along with credible democratic institutions with adequate mechanisms of checks and balances is pivotal for the sustenance of any nation, however big or small, whether rich or poor. Political expediency could be adventurous in the short run but spells disaster in the long run. It is ultimately the people who suffer, the societies that bleed and nations that get fragmented.