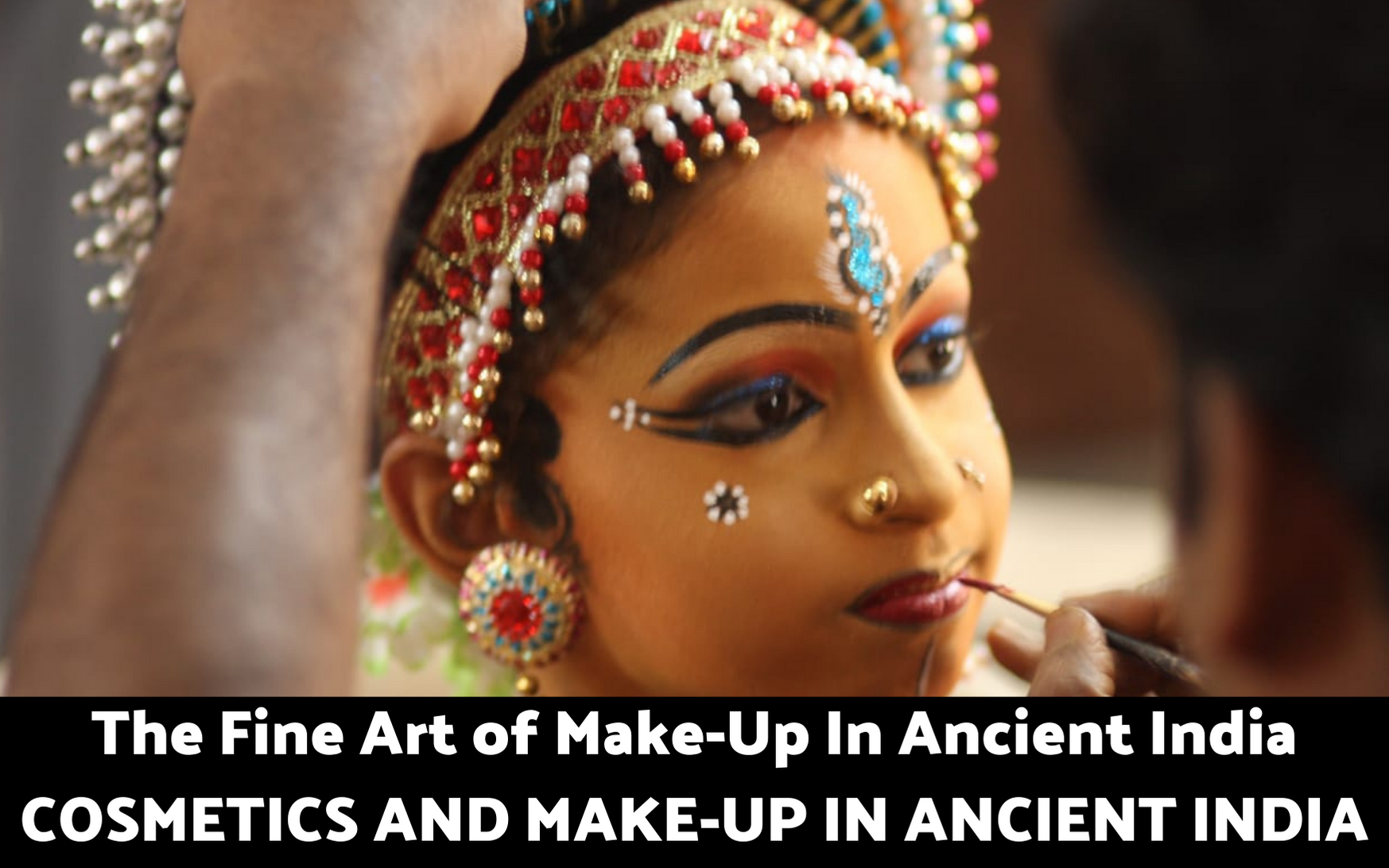 There is a misconceived notion in the West that the ancient Hindus were mostly other worldly and not given to enjoying the material comforts like their counterparts in the West. Nothing is further from the truth as would be evident from the literature of those days. The Arthashastra of Kautilya, The Kama Sutra of Vatsyayana, The Brihat-Samhita of Varahamihira, several works of Kalidasa like Shakuntala, Kumarasambhava, Meghaduta, etc bear enough testimony to the fact how people enjoyed the material comforts and how women reveled in the art of make-up and body aesthetics.

Cosmetology and the Art of make-up was one of the 64 Fine Arts [called ‘Chatusshashti Kala’ in Sanskrit] practiced in those days. Even the Sri Lalithasashasranama makes a mention about this by using the epithet ‘Chatusshashti Kalamayee’, describing Goddess Lalitha as an adept in all the 64 Fine Arts. Even though Vatsyayana’s Kama Sutra has been considered as the standard text on the 64 Arts, there are other works in Sanskrit like the Shukra Neethi, Abhilashitartha Chintamani, Natyashastra, etc, which deal with the same subject. While some of the 64 Arts like painting, dance, drama, music, sculpture required special talent and aptitude to pursue, the art of cosmetology and body make-up was common to all the womenfolk. Besides, some women took it as a wide subject for study and research. The following are the broad outlines of the art of Cosmetology prevalent in ancient India:

*Decorating the body with paint*

This art dealt with the painting of the forehead with ‘Tilaka’ and the Sanskrit word used was ‘Visheshaka’—a word used by Kalidasa. In his drama ‘Malavikagnimitram’, Kalidasa refers to the painting of cheeks, the forehead, and lips of women with beautiful designs, particularly with the advent of spring. It was a practice in those days to cut thin and tender Bhurja leaves in decorative forms and designs and paste them on the forehead. In addition to Bhurja leaves, paints were also used to decorate the forehead. Apart from the forehead, it was also common to decorate the other parts of the body, such as the cheeks, the neck, the palms of the hand, the toes, the breasts, etc. The materials used for painting were Gorochana [a kind of yellow dye], Kasturi, Kumkum, Sandal Paste, etc. It was also common to decorate the several limbs of the body with creeper-like, leaf-like, and flower-like paintings. Visheshaka used to be a popular pastime with the women some of whom had specialized in the art of bridal make-up. The art of ‘Mehendi’, popular in Rajasthan and other parts of North India, came under this category. Mehendi was considered very auspicious and it was a belief that painting the hands with Mehendi would strengthen the bond between the husband and the wife, in addition to ensuring a long life for the husband.

This art was classified under the title ‘Gandhayukti’. Ancient India had attained the highest proficiency in the manufacture of scents, perfumes, and cosmetics. Besides catering to the needs of the common folk, expensive perfumes and scents were manufactured exclusively for the use of the royal households, aristocracy, and the inmates of the harem. Varahamihira, the famous astrologer of the 6th Century A.D, in his monumental work ‘Brihat Samhita’ devotes an entire chapter on perfumery under the title ‘Gandhayukti’. In shloka number 17 of this chapter, the author says that some specialists in the field of perfumery used to manufacture 1, 74, 720 varieties of scents and perfumes, using just 16 ingredients and mixing them in specified proportions, permutations, and combinations. The fragrance of the perfume depended on the purpose for which it was used and accordingly the ingredients were selected.

In another work on cosmetology called “ Abhilaashitartha Chintamani:, it is said that there were some lady connoisseurs who desired one particular type of pleasant fragrance of the water used for daily baths and a different fragrance altogether when they took oil bath. The book contains an exclusive chapter called ‘Dhoopsbhoga’on the manufacture of Agarbathis, incense sticks, etc, and an exclusive chapter called ‘Vilepabhoga’ on body perfumes and scents.

This aspect of body decoration was known by the name’ Angaraaga’. Women in ancient India used Lodhra powder for the face and light Alaktaka color for painting the lips, Alaktaka being the red resin of a particular plant. , Kalidasa uses the word ‘Lodhra renu’ [dust of Lodhra] for describing the facial make-up of Shakuntala and the word Alaktaka while describing Parvathi’s facial beauty in the Kumarasambhavam. For cleansing the body, instead of using soap, an oily substance known as ‘Phena’ was used which, when mixed with water, could produce plenty of foam, just like soap. The other ingredients used for facial make-up were turmeric, besan [called Kadale Hittu in Kannada], cream, butter, etc. Painting of nails and toes was common and the person who specialized in this art was called ’Nakhalekhaka’ [Nakha means nail in Sanskrit] The juice of the Garanti leaves was used to paint the nails.

According to Vatsyayana, the main purpose of body make-up was not merely to make it look attractive but the belief that when the body with all its limbs is kept clean and tidy, it would result in a healthy mind.

This was specified by the name ‘Keshalankara’. Indian hairdo and hairstyles were popular all over the world as is evident from the sculpture and paintings in different temples at Belur, Halebid, Khajuraho, Ajanta, Sanchi, Barhut, etc. Vatsyayana treats the subject under the title ‘Keshamardana’.The term ‘Keshamardana’ means applying hair oil, massage, and ensuring healthy growth of hair. Different styles of doing the hair like a ponytail, horsetail, modern shingle, curling, etc were known to women. There were specialists in this art who would do the appropriate hairdo for the bride on her wedding day.

Kalidasa in his ‘Kumarasambhavam’ [Chapter 1 and shloka 15] mentions that some young and pretty ladies used to get a lovely luster to their cheeks, shining like pearls, by drinking a kind of wine, specially prepared. It was thought that it improved their beauty by imparting a red flush to their cheeks and enabled them better to enjoy the company of their lovers and husbands..

Guest Writer
Previous articleThe Heart of Asia initiative for peace in Afghanistan
Next articleApproved by Indian Court: Her name was Ishrat Jahan and she was a terrorist
- Advertisement -