The fall of V.Narayanasamy govt & Change of Guard in Puducherry. 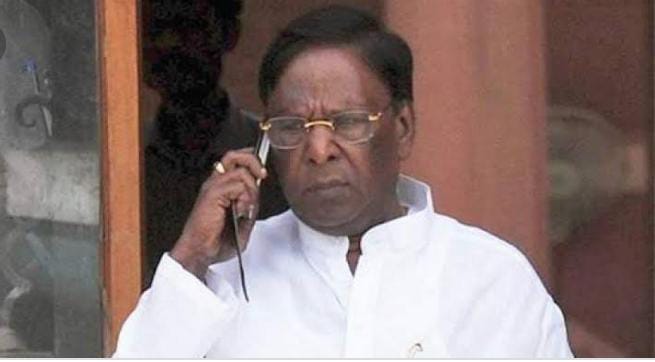 As on May 2019, Congress had 9 state governments all over the country, either alone or with state political parties. The popularity of the Congress is weaning and on 22nd February 2021, it lost its government just less than a week back when its ‘popular’ leader visited Puducherry and it was a bad omen to the government and its chief minister had to resign even before facing the legislatures on the floor of the house.

The ex-chief minister blasted the BJP for all the ills and the fall of the government and it lost the last government in the southern India and it now has only 5 government all over the country – namely Punjab, Rajasthan, Jharkhand, Chhattisgarh and Maharashtra. The top leadership has lost focus in listening to the woes of its leaders and they are paying the price of their arrogance and lack lustre performance.

Today the Congress friendly television media showed well-orchestrated two programs. In one of the news clipping, it showed Mr. Vadra cycling down to his office in a very expensive cycle along with a costly helmet and a suit boot style while his brother in law down south was driving a green coloured tractor on the roads of Wayanad, being welcomed by a group of girls in a dress being worn by a particular community.

Luckily the leader did not utter a word such that more embarrassments on ‘samandar ke farmers’ jibes against the Modi Government are not uttered but his super rich ‘jijaji’ was worried about the poor man on the street. But now the public has become smart and it does not watch such nautanki and friendly press.

The state is going to polls in the near future so old game of AyaRam / GayaRam is being played there which was made famous in Haryana in late seventies. It has become a game of musical chairs in states going to elections, when some disgruntled politicians cross over to other parties for better prospects in coming elections.

It has been fine tuned in such a way that anti-defection law is not violated. The MLAs resign from a party and are fielded by other parties offering them tickets, money, logistic support and these parachute candidates on winning are rewarded with cabinet posts in government formation. The political parties thus make mockery of the democratic norms and then these para troopers mention that democracy is in peril and these disgruntled souls loudly pronounce that they were not respected by the party leadership, knowing fully well that certain number of MLAs can only become ministers to serve the state.

First scenario will give the state a new chief minister for next one month and thereafter a caretaker government till the elections are held in end of the May 2021 to get the will of the people in the form of polls.

The Lt. Governor may suggest President’s rule to administer an indirect BJP rule till a new government is formed. The chances of this is not more than 20%.

The Lt Governor may accept the resignation of the current CM and may advise the current CM to continue as the caretaker government till the formation of new government. This chance is least, since the MLAs did not had change of heart to see him as the CM, even during elections!

Chances of a new chief minister is quite high and this will be done in the next 48 hours. This change in government will have its effect on the Tamil Nadu government elections, where the bargaining power of Congress for equal seats will diminish and Congress will get lesser seats than last time to contest. Formation of third front is very fertile and will eat into pro Congress plus DMK votes in the new elections.

This is a great setback to the Congress and this event has increased the coming back of AIDMK back to power in TN and formation of ex congress front ably backed by the BJP in Puducherry, where popularity of BJP is very high.

Politics is a Punny game for sure.