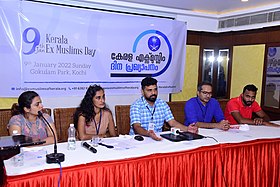 Kerala, the land of natural beauty is renowned as God’s own country. It also has the distinction of being the state which boasts of a 100% literacy rate. However, of late, the Communist-ruled Kerala is in the news for all the wrong reasons. Various news reports suggest that Kerala has become an ISIS hub with maximum recruits to the dreaded terrorist outfit being from that state. With the Taliban takeover of Afghanistan, news emerged of four Kerala women lodged in an Afghan province, who had accompanied their husbands, all members of the ISIS to the Khorasan province. They were making repeated requests to the Government of India to permit them to return to India but the GOI is in no mood to accede to their requests, which is but obvious, due to security reasons.
The Muslim population of Kerala increased from 3.18 crore in 2001 to 3.34 crore in 2011, constituting 26.56% of their population as against 54.73% Hindus. In 2018, 43.80% of the births in Kerala were to Muslims as against 41.61% to the Hindus.

With a rapidly increasing Muslim population in the state, the influence of the Sharia, the stringent Islamic Law, imposing restrictions on various activities, is more prevalent and pronounced on the Muslim populace. With a huge number of Malayalis working in the Middle East and West Asia, the outreach of the threat of terrorist outfits like the ISIS reaching out to them too, looms large. Coupled with this is the grave danger of ‘Love Jehad’ and ‘Narcotics Jehad’, which are soft weapons targeted at the other communities, capable of finishing them off without bloodshed. The fear against the same has not only been expressed by the Hindu organizations but also by the Bishops of the churches in Kerala. The amount of radicalization is such that it has instilled fear not only amongst the other communities but also amongst the more educated, enlightened Muslims of Kerala, who are seeking an alternative to their existing religious identity, which, they feel, will make them more acceptable to the others.

With that end in mind, an organization called the Ex Muslims of Kerala was founded on January 9, 2021, the day on which a freethinking Muslim, E. A. Jabbar debated with M. M. Akbar, an Islamic Dawah propagandist in Mallapuram, Kerala. During the course of the debate, the Muslims present therein were made aware of the ‘not so human’ facets of Islam. The members of the instant group are educated moderate Muslims, who are, primarily, atheists and wish to denounce the radical and the so called barbaric aspects of Islam.
Though the Ex Muslim organization in Kerala is the first of it’s kind in India, such a movement had already taken shape in North America.

Around two and a half years back, a movement which went by the hashtag #AwesomeWithoutAllah created quite a stir in social media, with many stifled voices amongst the Muslim community, who were sceptical in expressing dissent earlier on for fear of facing imminent death, started raising their voice and speaking up against those aspects of their religion which they didnot agree with.

The instant movement was spearheaded by an organization known as the Ex Muslims of North America, founded by a human rights activist called Muhammad Syed in 2012. They had put up billboards in various public places, one of which read ‘Nearly one in four Muslims raised in the United States have left Islam’. The primary goals of the organization were to reduce discrimination against those leaving Islam, promote secular values and normalize dissent.
What irked these Ex Muslims was the fact that Islam, according to them, provided for one way traffic – they compelled the ‘non believers’ to convert but didnot have any provisions for a consensual exit, death being the one and only option for the apostates. They also were grossly uncomfortable with the Sharia tenets and practices like the hijab. Hence, the Ex Muslim community had an increasing number of women joinees as they were the ones who felt the brunt of discrimination.

The Ex Muslims of Kerala have been working more or less on the above principles – providing the ones who disagree with a platform to voice their views and also arranging for legal assistance to those facing discrimination on account of leaving Islam, from their family members, neighbours or colleagues. The Ex Muslim organization led by Liakkathali, its President and Jasla Madassery, it’s Vice President, comprises of intellectuals from the Islamic community who are either atheists or are agnostic. They have denounced Islam either because they consider religion to be naive or irrational or because they are against the breach of human rights and excesses in the name of religion, which hampers their growth and progress as humans.
The Ex Muslim organization is involved in organization debates and seminars with Muslim on atheism and Islam to spread awareness about the same. However, an Islamic scholarly outfit called Samastha has also emerged in Kerala to counter the increasing popularity of atheism in Islam.

The stringent Islamic strictures, the Sharia law, the position of women in their society and the disdainful attitude towards other communities is continuously drawing individuals from the community towards other religions. The noted Malayali film maker, Ali Akbar converted to Hinduism along with his wife on 13th January this year. He is now known as Ram Simhan. He had announced his decision to convert on 11th December, 2021 following the bizarre celebration of the death of India’s first Chief of Defense Staff, General Bipin Rawat, by a host of his community members. The inclusive nature and much more liberal provisions of hinduism are attracting quite a few of the other community members towards it.

However, certain section of the practicing Hindus of Kerala are still sceptical of the Ex Muslim organization. They are not happy with some of the ex Muslims being more critical of some of the provisions of Hinduism than they are with those of Islam. A study by Pew Research Centre, an American fact finding organization revealed that around 100,000 Muslims leave Islam every year but an equal number convert to Islam, implying that there is no major loss in numbers for the community. While 55% of those leaving Islam choose not to convert to any other religion, 22% embrace Christianity. Since the former figure is quite substantial and that they do not convert to any other religion, in all probability they remain as covert Muslims, who have the potential of luring those from other communities towards themselves utilizing their liberal, moderate, secular image thus creating a platform for subsequent conversion of those individuals to Islam. If these are the figures in the USA, India would also do no better, is what the local Hindus believe In view of the above, it is imperative that the Ex Muslim organization to adopt an unbiased view of all religions, specifically of the one which they left recently because it is apparent that their knowledge of the latter would be more as they were practicing the same for quite sometime. It is only then that they would be considered more credible as an outfit amongst one and all.