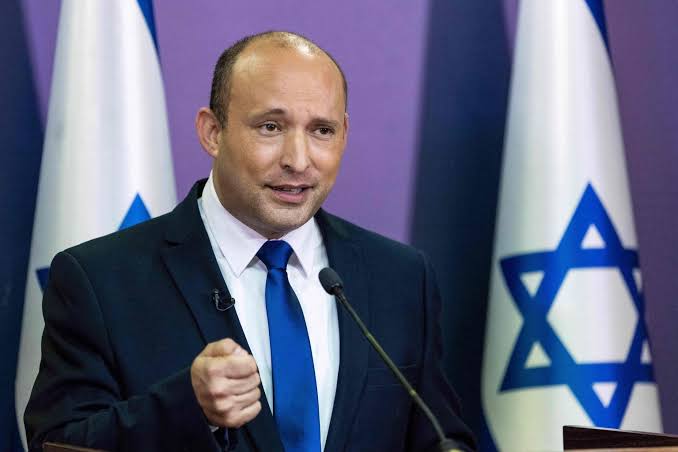 Britain took control of the area known as Palestine after the ruler of that part of the Middle East, the Ottoman Empire, was defeated in the World War One. The land was inhabited by a Jewish minority and Arab majority. Tensions between the two peoples grew when the international community gave Britain the task of establishing a “national home” in Palestine for Jewish people.
For Jews it was their ancestral home, but Palestinian Arabs also claimed the land and opposed the move.

The Israeli military said it targeted compounds belonging to Hamas, the militant group that controls Gaza and the incendiary balloons sparked 20 fires in southern Israel on Tuesday. Hamas said they were a response to a march by the Israeli nationalists in occupied East Jerusalem. There were no casualties on either side and calm had been restored by Wednesday morning. It said “terrorist activity” took place in the compounds, and that the IDF was “prepared for all scenarios, including the resumption of hostilities, in the face of continued terror acts from the Gaza Strip”. The Palestinian news agency Wafa reported that aircraft bombed a site in the Maen area, south of Khan Younis, and another south of Gaza City, causing material damage.

A Hamas spokesman said on Twitter that Palestinians would continue to pursue their “brave resistance and defend their rights and sacred sites” in Jerusalem.

Israel forces have launched airstrikes on Gaza, the first offensive since a new coalition government took power, just 72 hours back, coming just weeks after an 11-day conflict with the Palestinian enclave, which brought world attention.

Blasts were heard at multiple locations in Gaza around 1:00 am local time on Wednesday, Reuters and AFP reported, while a radio station operated by the Hamas militant group said strikes targeted a Palestinian training camp. The Israel Defense Forces (IDF) confirmed the operations in a statement on Twitter, also sharing footage of one of the strikes.

“Fighter jets recently attacked Hamas military complexes that served as camps and meeting places for terrorist operatives in the Khan Yunis and Gaza brigades,” the military said, adding that it is “prepared for all scenarios, including the resumption of hostilities.”

The attack was carried out in response to the inflating of incendiary balloons into Israeli territory, which created a scare in the region.

According to local media reports, the incendiary balloons ignited at least 20 fires around Israel border but Footage purporting to show the attack in progress was circulated on social media. It is unclear where the videos were captured, but unconfirmed reports noted a flurry of strikes around Khan Younis.

The balloons also coincided with an Israeli ‘Flag March’ through Jerusalem’s Old City on Tuesday, held yearly in celebration of the Tel Aviv’s victory in the 1967 Six Day War. Palestine authorities despise this day as ‘rage day’ in their area.

Despite fears the march, led by Israeli nationalist groups, could stoke tensions with the Palestinians, law enforcement authorised the event.

Tensions from the march spilled over into clashes, not only in Jerusalem but along the Gaza-Israel border as well, leading to multiple arrests. One Palestinian was shot in the leg, but was only lightly injured, the Times of Israel reported.

The march had been postponed from May, when it is usually held, due to a spike in hostilities with armed groups in Gaza, which spiraled into 11 days of fighting that killed more than 250 Palestinians and 13 in Israel.

The violence ended after a ceasefire deal mediated by Egypt late last month. The latest strikes also come as the first bout of hostilities with Gaza under a new Israeli government, with Naftali Bennett sworn in as Prime Minister on late Sunday night.

Dubbed the “Change Bloc” and composed of right-wing, centrist and even Arab parties, the diverse coalition ended a 12-year reign by longtime PM Benjamin Netanyahu, after four consecutive elections in two years failed to produce a lasting majority.

The skirmishes are happening due to the following reasons:

Hamas has taken control of the PA and all actions are taken by them bypassing PA;

Hamas wants an early election to take control of the government, thereby huge funds which come from EU, Arab League, OIC and USA and of course the Muslim world.

Iran is going through an election process, where elections will be held on June 25th to elect a new President.

The whole US attention is towards the Afghan pullout and all discussions are taking place at Doha and strengthening of air bases, which will move out from Afghanistan with all armistice missiles to a new base.