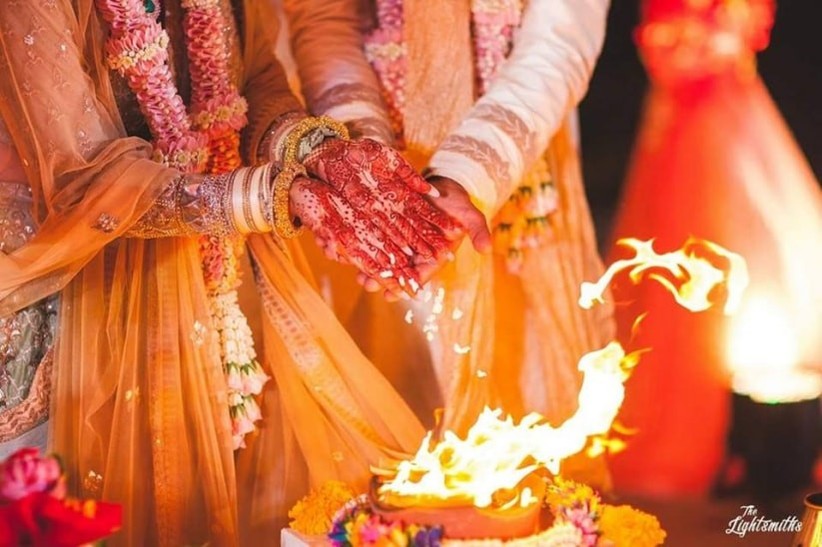 Marriage is not just a boy and a girl getting together to stay as husband and wife, it is an event where two families unite. Marriage is a joyous event celebrated in any region and religion. Though the customs may be different, the essence is the same to feel the joy and happiness. Though in Hinduism the moment of the marriage is the “Muhurtham” (Auspicious Moment) which is mainly when the bride ties the “Mangala Sutra” which is the symbol of the bond of union between Groom and his wife. Basically, it is an inseparable bond between the husband and the wife. In Hinduism a married woman is expected to wear the Mangal Sutra throughout her lifetime and it is believed to enhance the well-being of her husband and her family. It is not important that it be made of Gold, there are many women who tie dried “Turmeric Rhizomes” which serve the purpose for them.

While there are pre and post Muhurtham rituals, the post marriage rituals start with a resolve and a commitment to uphold the essence of Marriage Vows taken while tying the Mangala Sutra and at Saptapadi to further understand each other. There are some post marriage rituals are conducted by the Groom’s Family.

Assurances from the groom’s family or the blessings of the elders from her own family will not be sufficient to convince the Bride to lead a contented married life. The Groom has to understand her well, take her home, make her to feel one with the family, she has to be included among them, not to make her missing her mother, entertain her, live with her to fulfil the natures procreation activity and that of his own Vamsha Vridhi (Extending the Clan), hold her hand and walk the entire distance of life for spiritual attainment. These rituals strongly emphasize the continued bondage in the new relationship between both the families as indicated by the participation of Bride’s brother in certain rituals.

In our rituals there is an important stage which is “Hennu Oppisuvudu” (Handing over the Bride). The Bride is made to sit on the lap of the Groom with his parents on either side. The Bride’s parents and their family member facing them tell this “Etavat Kaala Paryantam Putravat Paalitaamaya Idaaneem Tavaputraaya Datta Sneehena Paalaya meaning “We have brought up the child for all these years, from now on look after her has your own child with affection.

In general this Handing over the bride is Kanyadaana. It is one of the most sacred wedding rituals that binds the two families. A sacred tradition that in its entirety is a beautiful amalgamation of bittersweet emotions. The bride’s father hands over his daughter’s hand to the groom. To “hand over” the most precious daughter is not a simple thing to do for any parents, especially for the father. The emotional weight of this ceremony is heavy on the heart of the bride’s father. A daughter remains her father’s most possessions and he can never stop loving her even after handing over to the man with whom she will share her happy moments of her life. By handing over his daughter the father wants his daughter’s new partner to take care as he was doing all these years, the father expects the groom to look after her better than him.

Kanyadaana is a ritual so nicely knitted to help the bride’s father to go through the entire ceremony in a ritualistic manner of letting go of his daughter. No one can imagine how heavy this must be for a father. We fail to imagine the tumultuous mind and the whirlwind of emotions the father must feel at such a sensitive time where he is letting go of the one thing that he cherished all of his life. But then he has to do so that his daughter can spend her life with a new partner. The ritual doesn’t stop there, after Kanyadaana the groom’s family prepare for “Mane Tumbisikolodu” which is adding the new Bride to the family this is Shastra.

This is the significance of Kanyadaana and only those who can relate to these emotions can understand it…..for the rest it is just pushing the daughter out of the family.

Sreeram Manoj Kumar
Previous articleFlorida and Texas to celebrate October as a ‘Hindu Heritage Month’
Next articleDo educated Muslims ever wonder why Muslims fight with every religion around the world?
- Advertisement -