Significance of Betel Leaf in Pooja 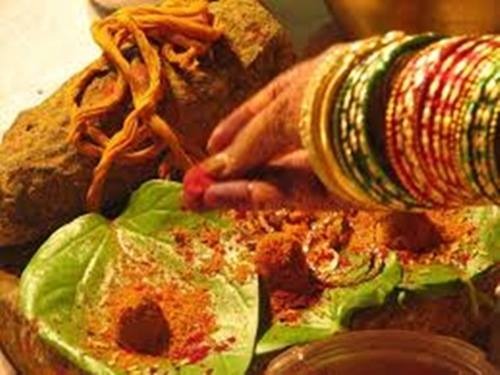 One of the most important puja items in Hindu rituals is the betel leaf. Known as tambula in Sanskrit, the word owes its origin to the term ‘tamra’ that denotes copper which is red-colored. The red color is because of the catechu or kattha. In other regional languages in India the betel leaf is known as pan, nag ve, vetta or vettila. The betel leaf is used in pujas by Hindus for both spiritual and health reasons. The tambulam is traditionally offered by Hindus to guests after food because of its healthy properties and, therefore, after the neivedyam, tambulam is offered to the gods.

The spiritual side of the coin

The betel leaf is a symbol of freshness and prosperity. According to Skanda Purana, the betel leaf was obtained by the gods during the churning of the ocean for the nectar. The main reason that it is used in pujas, however, is that Hindus believe that the different deities reside in the betel leaf

Lord Vishnu resides inside the leaf

Lord Shiva and Kamdev reside on the outside of the leaf

Goddess Parvati and Mangalya Devi live on the left side

Mother Earth or Bhoomidevi lives on the right side

Lord Suryanarayana is there throughout the leaf

The betel leaf is also one of the items in Ashtamangalya: Flowers, Mangala ashtaka [rice colored with turmeric], Fruits, Mirror, Dhoti, Betel leaf & Betel nut, Lamp and Kumkum &Kajal [or kanzashi, a black ointment used to highlight the eyes] ..

Betel leaves with holes, betel leaves that are dry, and ones that are torn in the middle are not utilized in pujas. In south India, Dakshina to the priests and elders are given by keeping betel nut and a coin in the betel leaf. All pujas contain betel leaves and betel nuts.

Betel leaves are also used to adorn the mouth of the Kalash pot because it purifies the water.

According to Sushruta, the greatest of ancient Indian medicine men and the world’s first-ever surgeon, the betel leaf preparation keeps the mouth clean, strengthens the voice, tongue, and teeth, and guards against diseases. It is also said to aid in digestion (saliva produced due to the chewing of the betel leaf helps in the digestion process of our body). The alkaline in the saliva helps in reducing the spread of cancer. Science has proved that cancer cells die when kept in an alkaline solution.

The betel leaf contains a little bit of betel oil (it is a volatile oil). It generates the spice and the taste that you feel when you chew the betel leaf. In ancient literature, this has been documented. It destroys foul odor too.

By itself, the betel leaf is a powerhouse of vitamin A and C. Further, it also contains plenty of calcium, which reduces or even prevents osteoporosis.

The other ingredients used along with betel leaf are very useful too. Fennel and betel nut help speed up digestion. Nutmeg dries up the mucous. Kattha also helps in drying up the mucous. The betel leaf is also a great blood thinner. And cardamom and cloves help in reducing gas and acidity. Kattha and betel present in paan help all those suffering from cold and cough by controlling mucous production.

Amit Pandey
Previous articleA ‘Pervert’ Celebrity asks an ABSURD question to Golden Boy Neeraj Chopra; is this the way we treat our Heroes?
Next articleModi Govt’s TOPS; A scheme that has REVOLUTIONIZED the sporting culture in India
- Advertisement -