Should Hindus support backward Pasmanda Muslims, in their fight against discrimination by upper caste Muslim, because they claim it was upper class Muslim, who demanded Pakistan? 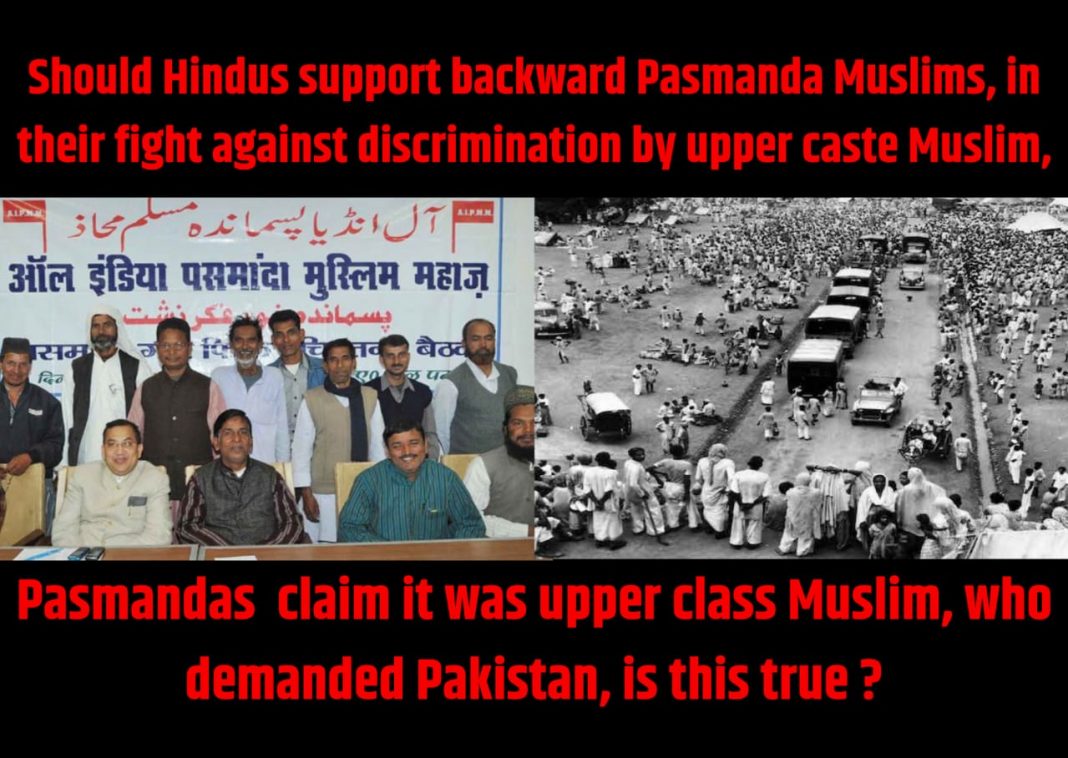 Pasmanda Community—who are backward and Dalit Muslims—are protesting against the discrimination and abuses they face by upper class Muslims. They are also demanding reservation for Pasmanda community on line of Hindu Dalit by claiming that they are secular Muslims, and it was upper caste Muslims, who had demanded Pakistan before independence, not Pasmanda Muslims. Should Hindus believe their secular face mask? Or supporting them would be devastating for Hindus? Hindus must analyze it before lending support to Pasmanda Community, because for a Muslim, Islam is always above than nation.

“They set a narrative that Islam is egalitarian. Islam doesn’t recognize caste system.” They bashed and disgraced Hindu societies for the caste system among them. Self-proclaimed custodian of Muslims gave slogan of Jai Bhim, Jai Meem, which signifies Mulsim + Dalit alliances, to convey the message of Muslims embracing Dalits, the fourth Varna of Hindu, a socially discriminated class, because of their caste in Hindu caste system.

Those who claim to have inherited the legacy of Dr. B.R. Ambedkar, forged the Dalit + Muslim alliances in the name of social justice, betraying Ambedkar, who was never in favour of Dalits having a political alliance with Muslims. Mayawati, a self-proclaimed champion of Schedule Caste and Schedule Tribe blatantly forged Muslim Dalit alliance. Asaduddin Owaisi, President of All India Majlis-e-Ittehad-ul-Muslimeen (AIMIM) joined hands with Prakash Ambedkar of Bharip Baahujan Mahasangh to form the Vanchit Bahujan Aghadi (VBA) to bring together Muslim and Dalits.

On the line of Dalit, Ajlaf and Arzal Muslims invented a new word Pasmanda Muslim, who are agitating against discrimination and abuses by Ashrafs.

Pasmandas, who comprise Ajlaf and Arzal Muslims, are 85% of Muslim population compared to 15% upper caste Ashrafs. Pasmandas claim Ashrafs enjoy power with votes of Pasmandas only to deny them equal status. Pasmanda raises their voices that Ajlaf and Arzal Muslims are not only out of politics, but also out of public institutions. Pasmanda activists explain that upper caste Ashrafs have occupied all the important positions in Muslim minority institutions particularly Aligarh Muslim Universities (AMU) and Jamia Millia Islamia (JMI). Muslim Political parties, which are dominated by upper caste Ashrafs, do not even recognize discrimination Pasmandas face. Pasmanda community has launched agitation against Syedism in Islam with 85% versus 15% slogans.

All India Pasmanda Muslim Society (AIPMS) has also been demanding reservations for Dalit Muslims within Scheduled Caste Category, which provides reservation to Hindu, Sikh and Buddhist Dalit only.

85% Pasmanda Muslims are seeking support from Hindus in their fight against Ashrafs and in their struggle to demand SC/ST reservations. Pasmandas, who claim themselves to be secular, also claim it was Ashrafs, who demanded Pakistan in 1947. Some eye opener disclosure to reality check.

Pasmanda is said to be a fictitious word, as it comes from an organization called “Pasmanda Muslim Mahaj, which was founded by Ali Anwar in 1998. Like the terminology ‘Dalit,’ Pasmanda is also a political term, which means the Muslims, who were left behind.

Can communist connection of Ali Anwar be disregarded? He was a journalist working with Janshakti, which was a CPI newspaper. Ali Anwar has written a book “Maswat Ki Jung” which describes how Azlafs and Arzals have been oppressed in India, and they have no representation in Islamic organization such as AIMPLB and Waqf Board. It also campaigns to grant SC status to Arzal Muslims OBC status to Azlaf Muslims. Ali Anwar, in his book, blames Hindus for bringing caste system into Islam despite their conversion. How disastrous would it be for Genenral Category if Pasamanda Muslims are included in SC/ST category? Opportunity for General Class would get thinner than ever before. Would Hindus ever realize the outcome of their support to Pasmanda Muslims?

For a Muslim, Islam is above than the constitution of country. Hindus, who are supporting the Pasmanda campaign, must ask themselves. Do Pasmanda Muslims have a different ideology than Asjrafs? Have they denounced the Quran, Hadith or Sharia? What do Pasamanda think of Kafirs in their theology?

Hindus also need to find out who are those protesting against CAA, who are those sitting at Shaheen Bagh? Is it 15% Ashrafs or 85% Pasmandas? Only 15% Ashrafs voted for Muslim League in 1945 General Election 1946 Provincial election?

The Pasmanda community is neither secular nor they have views on Indian nationalism different from Ashrafs. They are trying to create a charade of being secular to create a distance from Ashrafs for their vested interest. However, their basic ideology of Islam remains the same. Shouldn’t Hindus be mindful?

Manisha Inamdar
Previous articleTo break the Hindu Unity, now Bollywood and OTT Platforms have started attacking Brahmins by showing them as EVIL
Next articleSiachen Glacier Tango at the heights!
- Advertisement -