Siachen Glacier Tango at the heights! 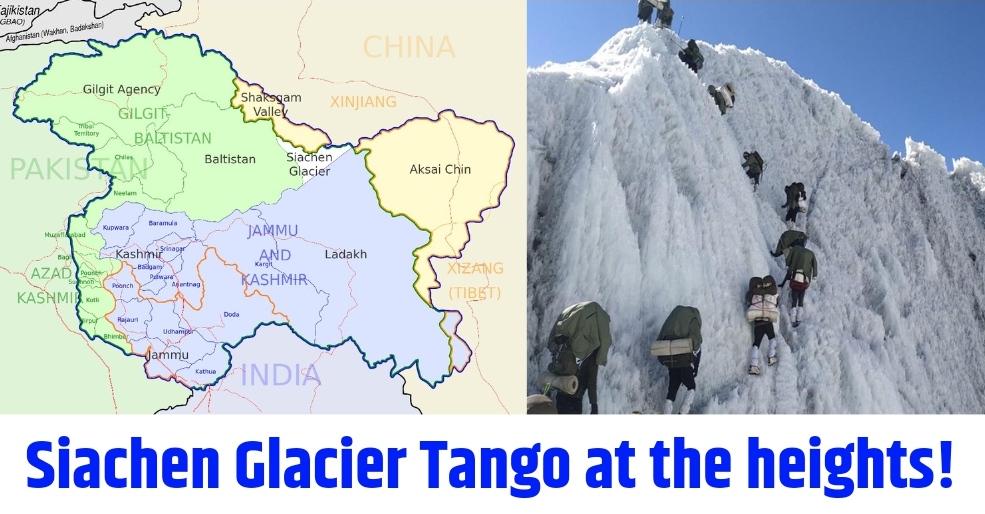 Why didn’t Pakistan react to the Siachen occupation by the Indian Army in 1984 like the way India raised the Kargil issue? Even the US was on Pakistan’s side in 1984. Why do Pakistanis link Siachen with Kargil? It belongs to us after the nature has killed many more than the bullets across the border.

The Siachen Glacier is a glacier located in the eastern Karakoram range in the Himalayas at about 35.421226°N 77.109540°E, just northeast of the point NJ9842 where the Line of Control (LoC) between Pakistan and India ends.

At 76 km (47 miles) long, it is the longest glacier in the Karakoram Range and second – longest glacier in the world’s non – polar region. It falls from an altitude of 5,753 m (18,875 ft.) above mean sea level (MSL) at its head at Indira Col on the India – China border down to 3,620 m (11,875 ft.) at its terminus or base point. The entire Siachen Glacier, with all major it’s passes, has been under the administrative control of India (currently as part of the Union Territory of Ladakh, located in the Kashmir region) since the year 1984. Pakistan maintains a territorial claim over the Siachen Glacier and controls the region west of Saltoro Ridge, lying west of the glacier, with Pakistani posts located 3,000 ft. below more than 100 Indian posts on the ridge.

The Siachen Glacier lies immediately south of the great drainage divide that separates the Eurasian Plate from the Indian subcontinent in the extensively glaciated portion of the Karakoram sometimes called the “Third Pole”. The glacier lies between the Saltoro Ridge immediately to the west and the main Karakoram Range to the east.

What I have read about Siachen, it remains covered with snow for whole year so neither Pakistan nor India ever tried to make their check posts over it in past. Pakistan allowed mountaineers to visit Siachen and provide access from their side till early 80’s. Indian think tanks were concerned and thought Pakistan might occupy Siachen on ground of such activities, therefore India sent its troops and occupied Siachen peak in the year 1984. Intelligence agencies in India found out that Pakistan was trying to shop snow shoes, in Europe, and its accessories and an immediate alert was sent and the glacier region were occupied.

Pakistan at that time was busy in the Afghan war therefore they couldn’t able to examine the movement of the Indian forces at Siachen. Secondly, it was not in favour of Pakistan to confront on two circumambient (Afghan War + India) at same time. On the same lines, Pakistan didn’t want to wage another war with India for a Glacier, which was though very strategic point at that point in nature.

After losing the Siachen Glacier in the year 1984, General Pervez Musharraf who was junior officer presented the plan of attacking India through Kargil to General Zia. General Pervez Musharraf was in opinion that Pakistan would be able to bargain with India over Siachen, if they capture Kargil. However General Zia discarded the plan on grounds of their failure in the Operation Gibraltar (Pakistan attacked India through Kargil in August 1965 which later converted into full-fledged Indo – Pak war in September 1965).

India attacked International boundary of Pakistan on Sep 06, 1965 when Pakistani forces were moving towards Kargil. Instead of attacking on India through Kargil, General Zia started Cricket Diplomacy in mid – 1980 which reduced tensions and improved bilateral ties.

In 1988, when Pakistan organised SAARC Summit in Islamabad, it was rumoured Benazir Bhutto met Rajiv Gandhi in an unofficial one-on-one meeting. Benazir Bhutto offered to support Rajiv Gandhi over Khalistan issue with a condition of returning back Siachen to Pakistan. Rajiv at that time didn’t commit anything in Islamabad. Some sources reveal that Choudhary Aitzaz Ahsan later visited India and provided list of Khalistan movement activists to India. There was not official agreement on board therefore I considered it as blunder if it is believed to be true. I’m not sure how authentic it is but this story is being covered in many current affair documentaries in Pakistan.

It is also believed that heavy crackdown was carried against Khalistan activists after Choudhary Aitzaz Ahsan’s visit in India. Neither ISI nor government of Pakistan ever endorse these events officially.

When both Pakistan and India tested nuclear weapons in the year 1998, within a period of 30 days, there were reservations that this situation might lead towards another war. Diplomats of both sides pulled up their socks to promote peace efforts. As a result of these efforts, Indian Prime Minister Shri Atal Bihari Vajpayee arrived Lahore on Feb 21, 1999 in a bus, after crossing the Waghah border with some prominent personalities of the time. At that time, it was certain that both Pakistan and India were going to do some miracles in the region. The respect for the Indian PM in Pakistan was enormous and both countries hoped to find a solution for the region.

Before this move, Gang of four Generals led by General Pervez Musharraf reorganised their plan (which was discarded during Zia era) of attacking Kargil in autumn of the year 1998. General Pervez Musharraf and his 3 other Generals were in opinion that both Pakistan and India are atomic powers therefore if Pakistan attacks on India through Kargil, they might be able to bargain with them over the Siachen issue. They assumed as Pakistan is now atomic power, therefore India will not be able to attack on the International boundary like they did in the year 1965. General Pervez Musharraf and his gang was also in opinion that this situation might create uprising in Kashmir and they would be able to advance in the remaining part of the Kashmir region.

This plan was kept so secret that ISI and the Federal Government of Pakistan, were not on board and on the same page in the initial phase. Mian Nawaz Sharif was informed in one of the cabinet meeting after militants were sent, wherein much details weren’t disclosed to him. The die for the ensuing war was cast. India was late to send its recce team or the team was never sent but was sent on paper. The militants captured heights and were noted by the shepherds as the spring were set in and area was occupied by the militants and mercenaries.

As Kargil war started from the Pakistan’s end, but few areas on the Indian side was also captured, therefore everything went in Indian favour. As Indian Prime Minister visited Pakistan for peace efforts in the region, Indian foreign policy makers were successfully able to convince rest of the world that Pakistan has tarnished their peace process through Kargil War. This is one of the reason that Pakistan couldn’t receive any support from any of its all-weather friend notably China.

Things were quite normal in Kashmir during the Kargil war therefore majority of Kashmiris didn’t supported Pakistan’s stance over Kargil war issue. After pressure from the International Community, President Clinton called Mian Nawaz Sharif and urged Pakistan to withdraw all of their forces from the Kargil peak, but a fierce hand to hand fight ensued heavy casualties from both sides. Indian soldiers died recapturing the heights, which got occupied by the Pakistan mercenaries.

In the year 2011, when approximately 140 Pakistani soldiers were martyred due to land sliding in the Gayari sector in the Siachen, Pakistani Army Chief General Ashfaq Kiani offered India to consider Siachen as “No Mans Area”. India discarded the proposal due to their past experience over the Kargil war. India was once bitten twice shy and stabbed by Pakistan. India will never agree to this proposal from Pakistan ever, since enmity with China has increased manifolds and just 2 days back another Mountain Battalion consisting of 10,000 men has been approved by the Indian government.

At the moment both Pakistan and India are spending hefty amount of their defense budget on the Siachen Glacier. Siachen is also considered as the highest battleground on earth. Life of Pakistani and Indian soldier can easily be examined by the weather hostilities rather than the bullet from the barrel. The snow storms and frost bites of the men in uniform kill more men than the bullets from both sides.

The idea of declaring the Siachen region a “Peace Park” was presented by the environmentalists and peace activists in part to preserve the ecosystem of the region badly affected by the military presence. In September 2003, the Governments of Pakistan and India were urged by the participants of 5th World Parks Congress held at Durban, to establish a peace park in the Siachen region to restore the natural biological system and protect species whose lives are at risk.

Italian ecologist Giuliano Tallone terming the ecological life at serious risk, proposed setting up of ‘Siachen Peace Park’ at the conference. After a proposal of a transboundary Peace Park was floated, the International Mountaineering and Climbing Federation (UIAA), and the International Union for Conservation of Nature (IUCN) organised a conference at Geneva and invited Indian and Pakistani mountaineers (Mandip Singh Soin, Harish Kapadia, Nazir Sabir and Sher Khan).

The region was nominated for inclusion in the United Nations’ World Heritage List as a part of the Karakoram range, but was deferred by the World Heritage Committee. The area to the east and west of the Siachen region have already been declared national parks: the Karakoram Wildlife Sanctuary in India and the Central Karakoram National Park in Pakistan.

Sandia National Laboratories organised conferences where military experts and environmentalists from both Pakistan and India and also from other countries were invited to present joint papers. Kent L. Biringer, a researcher at Cooperative Monitoring Center of Sandia Labs suggested setting up Siachen Science Center, a high-altitude research centre where scientists and researchers from both the countries can carry out research activities related to glaciology, geology, atmospheric sciences and other related fields. Such ideas are utopian in nature.

National security and pride will always take precedence over such Pappi and Jhappi ideas of trivial nature.