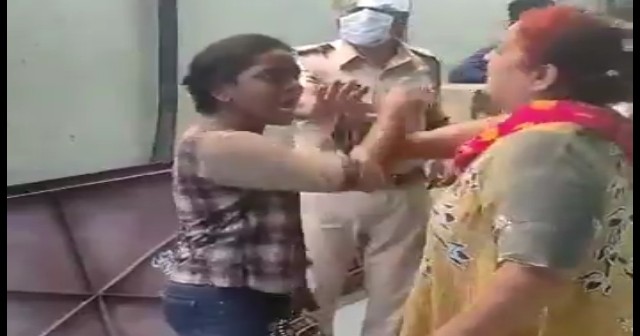 The issue of Loudspeaker installed over religious places and the loud voice coming from them has been discussed in India for quite a while. Many in past has complained about such loudspeaker, from Temples as well as Mosques.

A recent incident Mankhurd, Mumbai has been viral on social media. A Twitter user, with display name Karishma Bhosale and account ID as @be_karishma has alleged and posted a video, where it is seen she is being hacked by people around her.

Even Ms Karishma Bhosale is physically abused and even the Police personnel present there to calm the situation are heckled.

Later, in the subsequent tweets, Ms Karishma Bhosale has also alleged that she has been asked by the Samajwadi Party MLA Abu Azmi of the Mankhurd Shivaji Nagar Constituency, Mumbai to leave her residence.

After the tweets and video have gone viral, Ms Karishma Bhosale has posted a new video with details.

Such incident is not a surprise, in April 2017 when Singer Sonu Nigam had tweeted about being woken up by the Azaan from a nearby mosque and how it disturbed his sleep, a fatwa had been issued against him, by a religious head in West Bengal. A Rs 10 lakh reward had also been announced against Sonu Nigam for his comments on the Azaan.