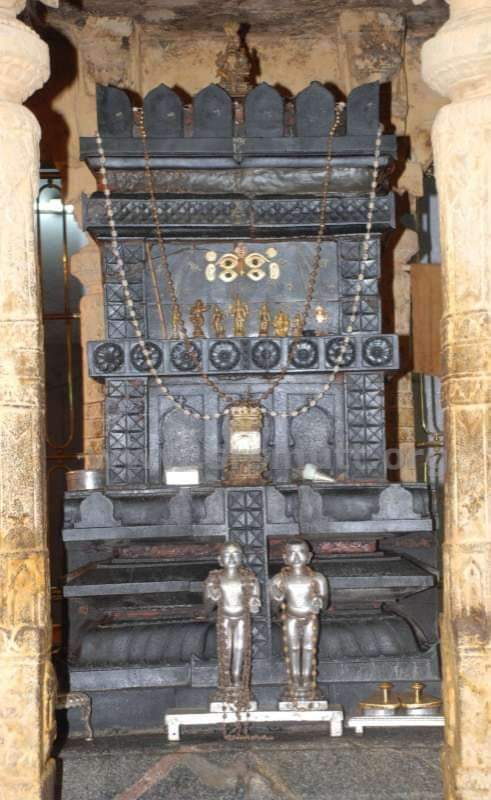 Yesterday I stood before the Moola Brindavana of Sri Raghavendra Swamy fondly called “Rayaru” in Mantralaya, Andhra Pradesh, what a feel it was….unexplainable!!!

Rayaru head of the Sri Matha left Kumbakonam in 1658 and headed to Manchale. He stayed in the house of Appanacharya for 13 years at Bichale near Manchale. It was during this time that Siddi Masud Khan, the Governor of Adoni, and his Dewan, Venkanna, an ardent disciple of Rayaru, oversaw the making of the Brindavana. Rayaru also came to the spot from time to time. During one of his visits, he found that Dewan Venkanna and Siddi Masud Khan had ensured that a beautiful Brindavana was constructed. Rayaru ordered that the Brindavana be kept aside for his successor, who he said, would have the majesty and worthiness to occupy such a beautiful Brindavana. That Brindavana is also present next the Brindavana of Rayaru in Mantralaya and it is that of Vadeendra Theertha (1728-1750), a descendent of Rayaru and the author of “Guru Guna Sthavana” (couplets praising the character of Rayaru as Guru)

Rayaru entered into the Brindavana in August 1671. Rayaru was the second after Vadhiraja Theertha (1480-1600) to enter Brindavan alive. The distinction of leading Rayaru to the Brindavana by holding his hand and personally escorting him to the place goes to Yogendra Theertha (1671-1688), the immediate successor of Rayaru. The Brindavana Pravesha of Rayaru was witnessed among others by his son, Lakshminarayana, Dewan Venkanna and others. Neither Appanacharya, the close disciple of Rayaru nor his sister were present on the occasion.

It was at this Brindavana that a weeping Appanacharya came and Rayaru completed the Poornabodha Stotra by uttering the last three words “Sakshee Hyastotra Hi” meaning Haygriva is the witness for things to happen as told in this stotra.

Even today all the devotees know that Rayaru is still alive and listening to his devotees.
It is from this Brindavana that Rayaru spoke to Thomas Munroe, the Collector of Bellary in 1800. He also spoke to Jagannatha Dasa, the composer of Sri Harikathamrutsara and Vijaya Dasa, Ibharampur Appa, Krishna Avadootha and many more devotees.

The Brindavana of Rayaru is slightly tilted to the right. This is because when Vadeendra Theertha read out “Guru Guna Sthavana” before the Brindavana, the whole Brindavana shook as if in appreciation and flowers were strewn over all the devotees who were present. To this day the slight tilt is visible.

There is a small crack on the front portion of the Brindavana. The crack is said to have formed when a woman, whose wishes were not fulfilled by Rayaru, hurled a pebble. She repented for act later and the same night Rayaru appeared in her dream and said he would have come to her in her dreams that night but alas she had negated all her good conduct in a moment of anger.

The Brindavana here is called the Moola (Main) Brindavana and all other Brindavana we find in different places are called Mruthika Brindavana.

Mrithika is a mixture of sand and clay collected from the garden of thulsi plants behind the Moola Brindavana, Mrithika is brought with sanctity every year amidst playing of musical instruments and spread on the Moola Brindavana. The entire soil of Mantralaya is sacred since it is the place where Prahlada had lived and performed yagna, its holiness having been further enhanced by the power of Rayaru and his austerities. The Mrithika Sangraha, collecting of soil is done annually on Ashada Purnima every year.