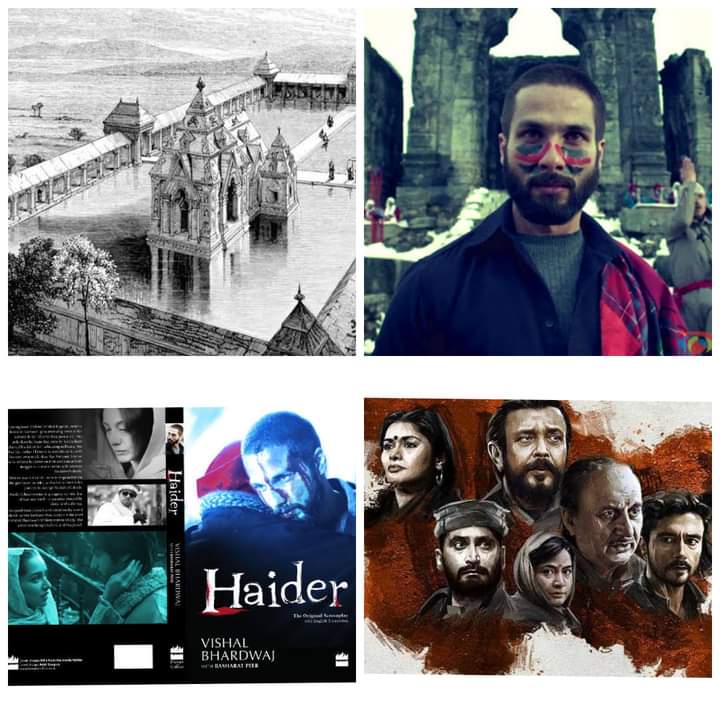 The Martand (Sun) Temple, a few miles away from Anant Nag in Kashmir is a symbol of our artistic and architectural excellence. It was constructed in the 8th Century CE under the patronage of one of the most powerful Hindu rulers, who reigned over a literal Akhand Bharat from Kashmir- Lalitaditya Muktapida of the Karkota dynasty.

The temple was demolished and reduced to ruins by the satanic Islamist invader, Sikander Shah Miri, hatefully called Sikander Butshikan due to his iconoclastic tendency.

The Martand Temple was again demolished, this time in the minds of people when film director cum composer Vishal Bharadwaj designated the temple as ‘Shaitan ka Gufa’ (Cave of Satan) in the song ‘Bismil’ from his anti India film, ‘Haider’ in which the Indian Army was projected as aggressors. Despite widespread protests from all quarters, the film, which the director, emboldened with the ecosystem and the previous UPA regime’s backing (though the film released in October, 2014), refused to climb down, claiming this film to be a masterpiece take of the Shakespearean play, ‘Hamlet’. He was handsomely rewarded by the ecosystem by showering awards on him for the instant film, due to his anti India stance. Bharadwaj, who is known for Shakespearean remakes like Maqbul from Macbeth and Omkara from Othello is also infamous for anti India propaganda through his films, which fetches accolades for these below par pieces of work. This man who considers himself to be Shakespeare’s reincarnation, though outwardly appearing to be extremely polite and civil, may have been upgraded as a film maker by the ecosystem, from a composer, particularly because they felt he was perfect for carrying on with their agenda of poisoning gullible minds against our nation.

When Vivek Agnihotri called up a local in Kashmir to know if he could shoot a scene of The Kashmir Files at the Martand Temple, the local was clueless – he had not heard of the Martand Temple. When he sent a photo of the temple to the local via whatsapp, he immediately responded ‘Oh ye! Shaitan ka Gufa‘. It was then that Vivek Agnihotri realized that Bhardwaj was successful in implanting an evil image of the Martand Temple in the minds of not so educated or well informed locals by calling it a Shaitan ka Gufa in his film, thus justifying it’s demolition. Since films are a soft weapon, leaving an indelible impression in the minds of individuals who are not so well endowed, academically, they are well exploited by ecosystem stooges like Vishal Bharadwaj to create a negative image of our nation, of our Armed forces and others and of hindus in general. Hence, their lot is so rattled with the advent of the alternative narrative via The Kashmir Files as now they know that their monopoly over the minds of gullible cinegoers is over.

It goes without saying that it’s Bollywood/Gutterwood/Terrorwood/Urduwood, whose dedicated soldiers are people like Vishal Bharadwaj, who are the real SHAITANS, causing us grievous harm.