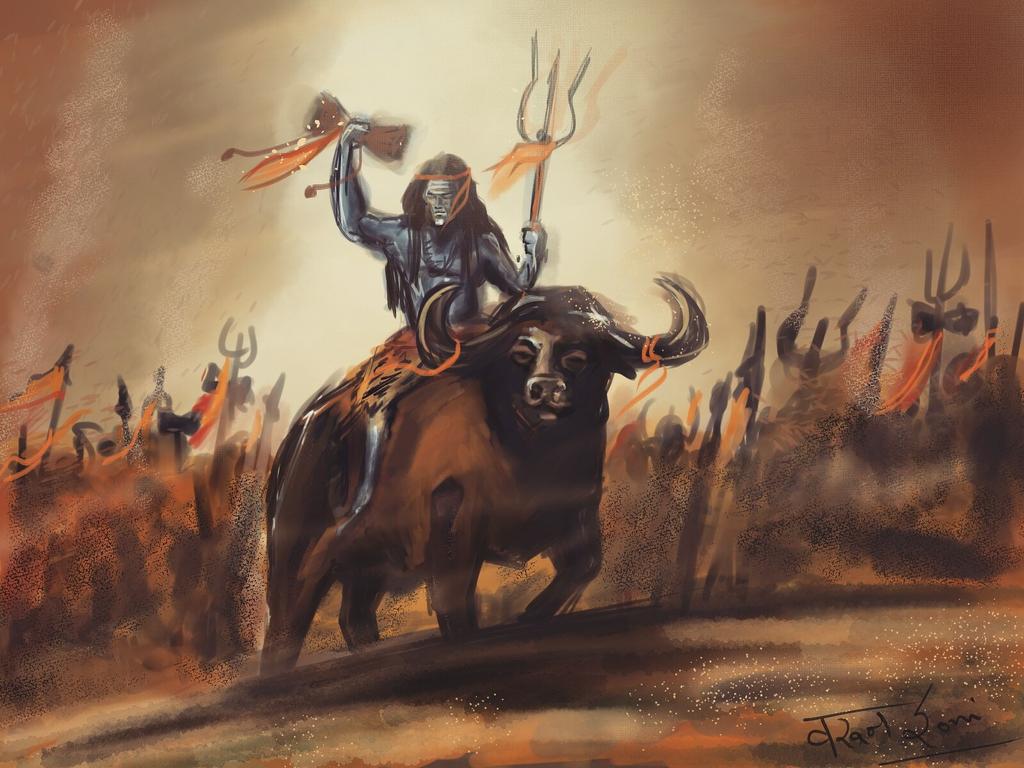 Sura (Divine) and Asura (Demon) conflict is perpetual, without a beginning and without an end. It is a tussle between good and evil. This good and evil trait is that which appears in both Sura as well as Asura. It is the level of dominance of the trait which categorises them in one particular sect. Though Prahlada was born in the Asura family he was not evil.

According to our Puranas both Suras as well as Asuras have to do austerities and please either one of the Trinity (Brahma, Vishnu, Mahadeva) to obtain a boon. In almost every incidence Brahma and Vishnu seldom gave the benediction to Asuras. They both never supported demonic activities. Maharudradeva was the only hope as He is Ashutosha, the one who is “quickly pleased”.

In a way Maharudradeva is the first “socialist” he never saw any difference between Suras and Asuras. He never discriminated among his devotees. If pleased He granted the wishes and blessed them unconditionally irrespective of who they are. He finds no difference in Laukika (Worldly) and Alaukika (Heavenly) and absolutely unbiased, does not categorise an Atma (Soul) as Deva, Daitya, Rakshasa, Yaksha…and so on. A pure socialist.

He gave boon to Bhasmasura, the boon where a touch by the Asura would burn the opponent into ashes. When the boon was granted, the stupid Asura wanted to test the authenticity of the boon on Maharudradeva. Later it was Maha Vishnu in the guise of Mohini who handled the Asura and tactically reduced him to ash.

At the time of Samura Manthana, Vasuki, the serpent that was used as rope to churn Mandhara parvata, emitted Halahala (Poison); it was Maharudradeva who volunteered to consume it. For the welfare of the society a true socialist will always take the initiative irrespective of the consequence which might affect him personally later.

Humiliated at the gathering Sati, wife of Maharudradeva jumps into the Homa Kunda at her father, Daksha Prajapatis place. Maharudradeva displayed “Divine Anarchy” by creating Veerabhadra and associates from his hairlock. The crowd formed was a homogenous and spontaneous group without fixed rules, laws or values in a society of gnostic that vandalised the entire place. Again a true socialist approach, intolerant towards injustice and going to the extent of destroying anything.

Kamadeva strikes with his arrow of flowers to nudge Maharudradeva out of trance. The disturbance is so agitating that the third eye is opened to reduce Manmatha to ashes. Ideologies when put on test a socialist erupts with a devastating weapon of destruction unaware of what that might bring in future. Manmatha had to roam as Aanangha (Bodyless) later.

Yama arrived on his black buffalo to take away the soul of kid Markandeya. Markandeya hugs the Linga and is adamant to let go. Yama could not wait any longer; he hurled his Paasha (Noose) on Markandeya which encircled the Linga too. Maharudradeva appeared to reprimand Yama for his actions. A sheer socialist act of dismissing the protocol in certain situations.

Look at His family photo, He has a bull as His vehicle which is an easy prey to Lion which is the mount of His beloved Uma. He has a snake dazzling over his neck which has its eyes fixed on the mouse which is the vehicle of His elder son Vinayaka. Peacock the mount of His second son Kartikeya is a bitter enemy to snake, yet peace prevails. There is total disagreement in the nature of coexistence, Kailasa, the perfect party headquarters of socialist.

Shiva Tattva is socially inclined but for a good cause.

Maharudradeva bless us all wity peace and tranquillity on the occasion of Maha Shivaratri.