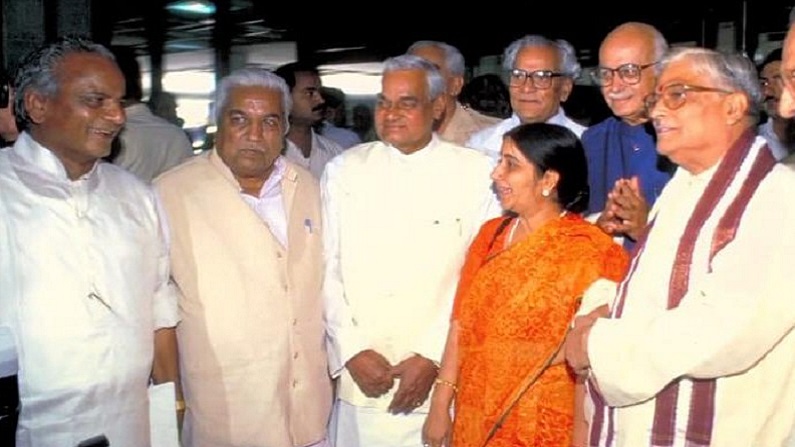 Abhas Verma
Abhas Verma is an IT professional in a MNC in Bangalore by profession and a writer by choice , he is the author of following books : 1.) Third Battle of Panipat ; 2.) Maratha Warriors of Panipat ; 3.) Historical Context of Shri Ram Janambhoomi . He is very popular on Quora and has has more than 1 million views. Here is a link to his blogs : https://thirdbattleofpanipatmaratha.blogspot.com/

When elections were held in 1989 VP Singh’s Janata Dal emerged as the single largest party and formed the government with the outside help from the BJP. Mulayam Singh Yadav, who had been a minister in Janata government in Uttar Pradesh, was sworn in as the Chief Minister. Later BJP withdrew support from Janta Dal government , Yadav joined Chandra Shekhar’s Janata Dal (Socialist) party and continued in office as chief minister with the support of the Indian National Congress (INC). His government fell when the INC withdrew their support in April 1991 in the aftermath of developments at the national level where it has earlier withdrawn its support for Chandra Shekhar’s government.

Handpicked by the late Rashtriya Swayamsewak Sangh (RSS) leader Bhaurao Deoras to head the UP BJP unit after the sudden demise of the party’s first state chief Madhav Prasad Tripathi, Kalyan Singh took to hand the task of countering on the Mandal wave . V.P. Singh  was the Mandal messiah and Mualyam Singh was the leader of Yadavs which comprised about 9% of total population in UP and Mandal wave soon gripping the country . BJP was then seen as a party of upper caste with men like Atal Bihari Vajpayee , Murli Manohar Joshi , L.K. Advani ,Bhairo Singh Shekhawat and young Pramod Mahajan .Even local U.P. leaders like Kalraj Mishra and Lalji Tandon were from upper caste. The  BJP then came up with OBC leaders like Uma Bharti , a chandravanshi by caste , Vinay Katiyar , Kurmi by caste and Kalyan Singh belonging to Lodh community  , a community that was around 4-5 per cent in Uttar Pradesh and dominates several districts of the western part of the state . Kalyan Singh was just the right man at the right moment for the BJP. He was a staunch supporter of the campaign for the Ram Mandir construction in Ayodhya. He was fiercely opposed to then Uttar Pradesh Chief Minister Mulayam Singh Yadav.  He was a non-Yadav OBC who had immense connection not only among Lodhs, but also among other OBC castes such as Kumhars, Kashyaps, Kurmis, Mauryas, Telis, and Sahus. Jitendra Anand a resident of Kazimabad Village in Atrauli Vidhan Sabha in Aligarh District recollects a massive gathering of Lodhs when Kalyan Singh visited the village as an MLA . Kalyan Singh proved to be a brilliant campaigner. The BJP launched the Ekata Yatra with Kalyan Singh leading the nationwide tour. The BJP leaders were to travel to all corners of the country filling pots with water from rivers to be poured into other rivers, signifying a unity of purpose.

He was born on January 5, 1932, to a farmer, Tejpal Singh Lodh, at Mdholi village in Aligarh district in western UP .  He was a pracharak of RSS  in Aligarh , where he was a small-time wrestler. After completing his education, Kalyan Singh got the job as a teacher in Uttar Pradesh. His rise came after his arrest during the Emergency imposed by the Indira Gandhi government. When he was released from jail after 21 months and as the Janata Party coalition formed governments in several states in 1977, Kalyan Singh became the health minister of Uttar Pradesh. Recalling his experience with the former UP chief minister, Murli  Manohar Joshi said, “My acquaintance with Kalyan Singh ji is from 1962. I know him since he was a teacher at a college in Aligarh. He used to sing very good songs, Kalyan Singh ji had a very melodious voice. He was a caretaker of the Rashtriya Swayamsevak Sangh.”

“Once, while he was addressing students in the school, I heard his speech. He was a very good orator. Many people at that time were of the opinion that he should go beyond this small place and talk to the people of both Jana Sangh and Sangh (RSS). After doing this, late senior BJP leader Nanaji Deshmukh ji then had said that now he should be brought to and given a ‘good place’ in the politics of the state”, he added.

On October 30 in 1990, Mulayam Singh Yadav, as UP chief minister, gave an order to the police to open fire at karsevaks who had gathered in Ayodhya . Mid-term elections to Uttar Pradesh assembly were held in mid-1991, in which Mulayam Singh’s party lost power to the BJP. BJP won 221  out of 425 assembly seats improving its tally by 164.

A few hours after the demolition on 6th Decemeber, admitting his failure to protect the mosque, he resigned the same evening. The Indian Union government dismissed the Uttar Pradesh state government on the same day. After the demolition, the apex court served contempt notice on Kalyan Singh and key officers like Prabhat Kumar, then principal secretary, home; Alok Sinha, secretary, tourism; Shankar Agarwal, special secretary, home; Jivesh Nandan, joint secretary, home; RN Srivastava, District magistrate, Faizabad; DB Rai, SSP, Faizabad and Umesh Tiwari, ADM, Faizabad. The contempt notice rattled these officers and they feared that their career might come to an abrupt end if the court pronounced any punishment. However, Kalyan Singh owned up the responsibility and the Supreme Court sent him to jail in October 1994 symbolically for one day and fined ₹20,000, saving the career of seven officers. However, a similar punishment would have ended the career of these IAS, IPS and PCS officers at that time.“Had Kalyan Singh not owned up the responsibility of whatever happened on that fateful day, we would have been languishing behind the bars,” remarked an IAS officer who had held a key position in the office of then CM.

After a period of President’s rule, state elections were held again in November 1993. Singh contested the elections from two constituencies, Atrauli and Kasganj, and won both. The vote share of the BJP was approximately the same as in the previous election, but the number of assembly seats it won declined from 221 to 177, and an alliance of the Samajwadi Party and the Bahujan Samaj Party (BSP) was able to form a government, with Mulayam Singh Yadav becoming the Chief Minister.

Kalyan Singh was one of the accused in the Babri Masjid demolition case. The Central Bureau of Investigation’s (CBI) chargesheet says that despite giving assurances before the National Integration Council, Kalyan Singh did nothing to protect Babri Masjid as UP chief minister. Kalyan Singh was eventually exonerated by the CBI trial court in September 2020.

In 1998, as a second-term chief minister Kalyan was addressing a public meeting in Amroha when he was informed that his government had been dismissed and Congress leader Jagdambika Pal had been appointed the chief minister.The decision was contested in the high court and Vajpayee went on a fast unto death. Subsequently, on the court orders Pal was asked to prove his majority in the assembly which he couldn’t and Kalyan returned to head the BJP government .

Technically, Kalyan Singh had three terms as chief minister, never completing a five-year tenure. His tenure received acclaim for stopping cheating in school examinations, a malpractice that defamed education in Uttar Pradesh.He brought the anti-copying law in 1992. He also introduced disciplinary ideas in schools, such as saying Vande Mataram instead of “yes sir” or “yes ma’am” during the roll call.

Abhas Verma
Abhas Verma is an IT professional in a MNC in Bangalore by profession and a writer by choice , he is the author of following books : 1.) Third Battle of Panipat ; 2.) Maratha Warriors of Panipat ; 3.) Historical Context of Shri Ram Janambhoomi . He is very popular on Quora and has has more than 1 million views. Here is a link to his blogs : https://thirdbattleofpanipatmaratha.blogspot.com/
Previous article5 D’s of China Diplomacy – Debt, Deceit, Dominate, Demand, Destroy
Next articleTaliban: A Threat to India ?
- Advertisement -