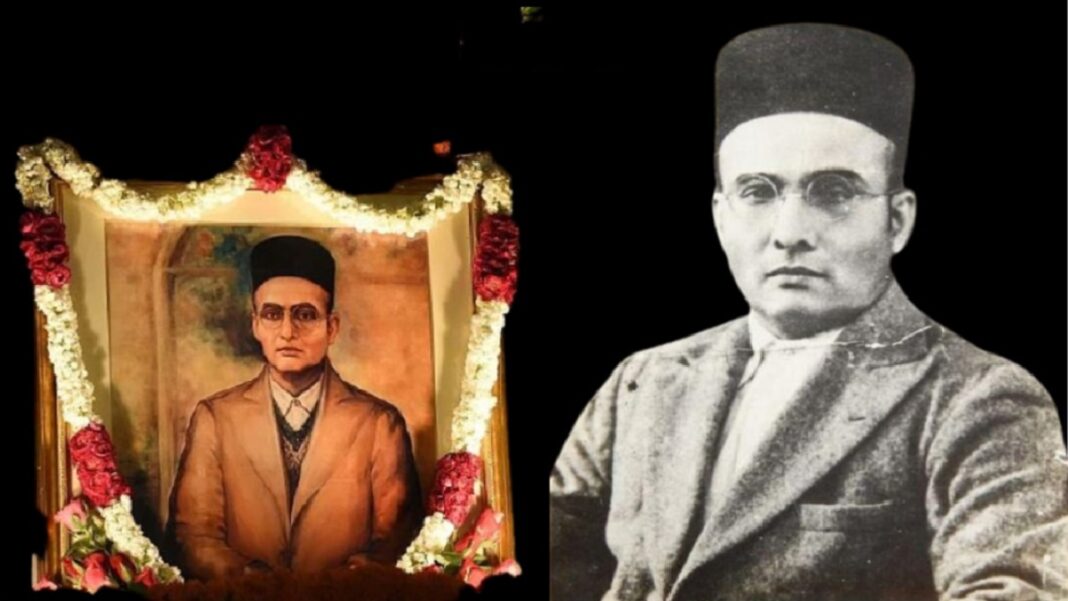 Today is the 139th birth anniversary of Veer Savarkar, a renowned Freedom Fighter and great Hindutva Icon. He was born on May 28 in 1883 in the village Bhagur in the Nashik district of Maharashtra. Savarkar was not only a great revolutionary but also an outstanding writer, inspiring poet, and social reformer. Savarkar was the first line fighter of the Indian freedom movement and a strong nationalist leader, who is also known as Swatantraveer or Veer Savarkar.

Savarkar’s mother’s name was Radhabai and his father was Damodar Pant, he also had three brothers and a sister. His early education was completed at Shivaji School in Nashik. At the age of 9, his mother died of cholera and a few years later, his father also died. Amid such miseries, all the responsibility of the family had fallen on Savarkar’s elder brother Ganesh Savarkar.

Savarkar was an extremely talented student since childhood and had a tendency to do something for the nation. When he was only eleven years old, he formed a group named as ‘Vanar Sena’. He was influenced by Bal Gangadhar Tilak and used to organize the Shivaji Festival and the Ganesh Utsav started by him every year.

In March 1901, he was married to Yamunabai. In the year 1902, he enrolled in the Ferguson college, Pune for graduation. Due to a lack of good financial condition, the expenses of his studies were borne by his father-in-law.

Savarkar had graduated and then moved to England in the year 1906 to study law. In London, he used to live at the India House, which was run by Pandit Shyam. It was a hub of political activities and revolutionary activities carried out by the Indians.

Veer Savarkar built the ‘Free India‘ Society, where Indian students were inspired to fight for freedom. Veer Savarkar soon gained a lot of fame due to his excellent writings, the youth used to be very impressed by his revolutionary ideas. In the year 1907, he started writing his very famous book ‘The First War of Independence 1857‘.

Savarkar kicked in Revolution in England

Savarkar always maintained that it is critical to use the weapons to liberate India from the clutches of the British Empire. He also formed a group of people armed with weapons. The articles written by Savarkar were published in famous magazines like ‘Talwar’ and ‘Indian Sociologist’.

The freedom fighter Madame Bhikaji helped him and ensured his book was secretly published in Holland. She was responsible for distributing the copies of this revolutionary book in France and other European countries, as well as the book was also transported to India. Savarkar, in this book, described the “Revolt of 1857” as the first war of independence against the British government.

In the year 1909, Madanlal Dhingra unsuccessfully attempted to assassinate Lord Curzon and later shot Sir Vielli. At the same time, the then British Collector of Nashik, A.M.T. Jackson, was also shot dead. After this murder, Savarkar was under the scanner of the British government, because Dhingra was his ally.

He was arrested by the British police and on March 13, 1910, he was imprisoned in London. He was charged with serious charges by the British Court, and sentenced to 50 years of rigorous imprisonment. At that time, Kalapani’s sentence was considered to be the harshest, and Savarkar was the only revolutionary who was sentenced to the cellular jail twice.

Savarkar spent 14 years in jail in Kalapani, and only after that was he released. In Cellular jail, he wrote poems with nails and coal and remembered them. He rewrote the ten thousand lines of poetry he had memorized after coming out of jail.

In the year 1920, Mahatma Gandhi, Bal Gangadhar Tilak, and Vitthalbhai Patel demanded the release of Savarkar. On May 2, 1921, he was sent to Ratnagiri jail and from there Savarkar was sent to Yerawada jail. In Ratnagiri jail, he wrote the book ‘Hindutva‘.

In 1924, the British government liberated him, but many restrictions were imposed on them. He was not allowed to move out of Ratnagiri, nor could he do any political work for five years. After being released from imprisonment, he formed the ‘Ratnagiri Hindu Sabha‘ on January 23, 1924, and started working for Indian culture and social welfare.

The British government used to exploit the prisoners kept in the cellular jail. They were subjected to a lot of torture, they were not even given enough food, and they were engaged in various activities such as cutting wood from the forests, peeling coconuts and removing their oil, working as a crusher’s bull in oil extraction mills, and working in difficult places in the hilly areas, all this had to be done by Veer Savarkar and his associates.

The jail administration would also beat up the revolutionaries when there was any mistake, and then they were kept hungry and thirsty for several days.

The relationship between Savarkar and the Hindu Mahasabha

After some time Savarkar had joined Bal Gangadhar Tilak’s Swaraj Party, shortly after that he had also formed a separate organization called the Hindu Mahasabha for the upliftment of Hindus. In the year 1937, he became the president of the All India Hindu Mahasabha and went on to become a part of the ‘Quit India Movement’.

Savarkar always opposed the creation of Pakistan and requested Mahatma Gandhi to do the same. Nathuram Godse assassinated Mahatma Gandhi in 1948 in which Savarkar’s name also came up. Savarkar had to go to jail once again but due to lack of evidence, he was released after a while.

It was Savarkar who was the first to suggest a dharma chakra in the middle of our flag tricolor. After independence, he was also awarded the degree of D.Litt by the University of Pune on October 8, 1951.

How did Savarkar become ‘Veer’ Savarkar?

When Savarkar was in Pune, the Congress had banned him for his statement, and he was strongly opposed everywhere. A stage and film artist PK Atre invited Savarkar for an event at Balmohan Theatre. As soon as the Congress workers came to know about this, they started opposing Savarkar, pamphlets were distributed to spread disinformation against him, and thousands of Congress workers had gathered to show him black flags.

Despite all this, Savarkar successfully did his program, which impressed Atre. He said that a person who is not afraid of the ‘Kalapani Sentence’, why would he be afraid of these Congress supporters.

Atre gave him the title of ‘Veer‘, which to date is associated with his name. He stressed the need to adopt the Hindi language as a common language across the country and called for an end to caste discrimination and untouchability prevalent in Hinduism.

Manish Sharma
Previous articleNaga Sadhus – The Brave Protectors of Sanatana Dharma whose contributions were forgotten by historians
Next article“This country is ours, If you dislike Muslims, then leave it”, vows Jamiat president Maulana Mahmood Madani
- Advertisement -