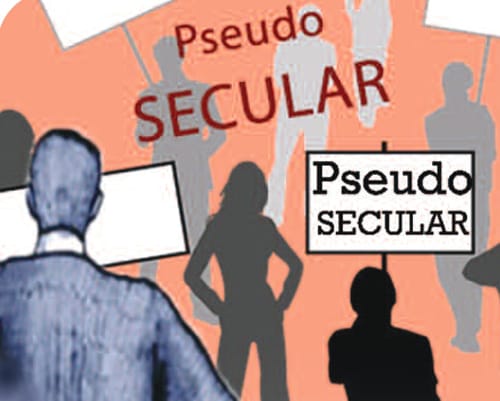 Why are these BHAKTS so annoying? Why do they dig up things, which are buried deep, from history?” Nikita Sharma got provoked to read a what’s app message.

A highly designated professional in a Multinational Company, 35 years old Nikita Sharma calls herself a modern and liberal woman, who believes in the idea that all humans are equal irrespective of their cast, creed and faith. What a noble ideology! But, what was the message, which infuriated Nikita Sharma?

The message reads: Islamic invaders not only destructed temples in india to destroy Sanatan Dharma or Hindu civilisation but brutally converted natives Indians to Islam, which made Afghanistan, Pakistan and Bangladesh Islamic Republics, which used to be once Hindu majority nations. Hindus are so vulnerable that they continue to be exploited to be converted by evangelists after Britishers came to India.

Nikita Sharma complained, “What is the need to dig up history? Let bygones be bygones. Let’s believe in humanity.”

Indeed, we must all believe in humanity. But, how can we close our eyes towards evil, which destroyed our land and brutalised our people? Don’t we have even fundamental rights to protect ourselves and our civilisation?” I asked.

“Really? Moplah Hindu Genocide in 1921 in Kerala, Calcutta Killings in August 1946, Noakhali massacres in October 1946 and  colossal blood bath during partition were committed in 1947.” How old are these Hindu Holocausts? I asked.

Nikita was taken aback. However, she tried to argue her point, “But, these killings took place before independence.”

Nikita replied, “they are Islamic States, what can we do?”

“What did you do as a nation, when handful of radical Islamists butchered thousands of Kashmiri Hindus and threw lacs of them out of valley, even if you had a strong Army and police forces,” I asked.

“The slogan of Ralive, Tsaliv ya Galive, which means convert to Islam, leave the place or perish, was political or religious?” I demanded to know.

Finding no answer, Nikita unabashedly dropped the last weapon of a liberal, “2002 communal riots were blot on India.”

Who burnt S6 of Sabarmati Express on 27 February 2002 killing more than 60 Hindus alive including women and children?” I asked.

Nikita Sharma represents upper middle class and so called liberal Hindus, who live in a cocoon from reality. When a realistic question, from a politically aware and historically knowledgeable Hindu, disturbs their illusion, the corporate Hindus start mocking them by calling BHAKTS.

In India a liberal Hindu and a radical Islamist in garb of modern outfit think alike. The similarity between Nikita and her colleague Rehan Khan is that he also reminds 2002 thousand times but he conveniently deletes burning of Sabarmati Express.

Unlike Nikita, who is apologetic about her faith, Rehan Khan demanded to go for Namaz with his other colleagues on Friday from his boss. He goes to mosque to donates his money knowing very well where his money is used. Rehan Khan terms hanging of Afzal Guru and Yaqub Memon as miscarriage of judiciary, while Nikita Sharma doesn’t hesitate to call Sadhvi Pragya as fringe element, who was acquitted by the court.

Like Nikita Sharma, Rehan Khan targets BHAKTS because a politically aware and historically knowledgeable Hindu expose farce behind “terror has no religion.” Hence a liberal Hindu and an Islamist both target an assertive Hindu, who is proud of his faith.

Liberal Nikita Sharma plays feminist card branding all the males as misogynist, when an unfortunate acid attack is committed. But, the same feminist like Nikita Sharma calls victim (who is killed by Muslim men for not converting to Islam) of love Jihad as communal branding by Sanghi. However, Rehan takes strong objection to legal ban on TEEN TALAAQ, which is atrocious against Muslim women, calling it “attack on his religion.”

When Hindu festival Diwali and Holi are round the corner, liberal Hindu like Nikita Sharma turns into selective environmentalist mocking Hindu festivals. But, such selective activists don’t hesitate to throw parties to celebrate Christmas and Halloween. On the other hand, the corporate Rehan Khan may or may not offer Namaz five times, but he neither criticises his festivals nor allows anyone to mock his religion.

Sanatan Dharma continued to stand strong in all its glory even after attack from Islamic Invasion and British subjugation. But, after independence, it is liberal and corporate Hindus, who damage the oldest civilisation from inside joining hands with Islamists and evangelists from outside. What a pity!