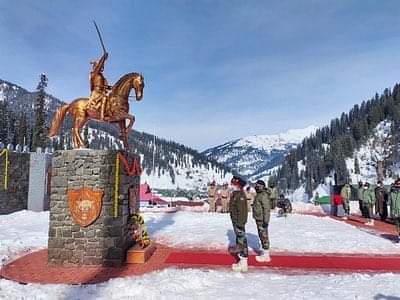 The once terror-torn Kashmir Valley is witnessing a paradigm shift in temperament, approach and operations since the abrogation of Article 370 in 2019. With business leaders being invited to invest in the state and the valley erupting in joy with Janmashtami celebrations by the Kashmiri Hindus, one new addition has been the installation of two statues of Chatrapati Shivaji Maharaj by the Maratha Regiment. One of those two statues was installed near the LOC (Pakistan Border) at 14800 feet above the sea level, making it the tallest place ever place to house a statue. The statue was made by a Pune-based sculptor, Ajinkya Lohogaokar.

As news of the inauguration of the two statues of Shivaji broke , there was a mixed reaction among the netizens, with a few leftist liberals questioning and some Kashmiri sub-nationalists questioning the purpose of such installation, who felt that instead of Chatrapati Shivaji, a statue of Zorawar Singh Kahluria, the 18th century military general of the Dogra Rajput ruler, Gulab Singh of Jammu, would have been more appropriate. But one needs to rise above petty regional bias to fathom the immense significance of a statue of none other than Chatrapati Shivaji , the epitome of hindu pride and glory, being installed at Kashmir.

It is believed that Kashmir is the land of Rishi Kashyap, one of the Saptarishis or seven ancient sages, credited with composing a few hymns of the Rig Vedas. Rishi Kashyap was the most ancient sage, according to Brihadaranyaka Upanishad. He is believed to have been the first to have been the first to have drained the Kashmir valley by opening a gap in the hills at a place known as Varahmula (may be the precursor to modern day Baramula). Hence, according to some historians Kashmir may have derived it’s name from Rishi Kashyap, being the shortened form of Kashyapa Mira, meaning the ‘Lake of Rishi Kashyap’. Kashmir’s history is laced with tales of bravery by it’s hindu rulers, the most significant amongst them being the 8th Century ruler, Lalaitaditya Muktapida, whose kingdom extended from the Sunderbans in Bengal to Uzbekistan in Central Asia – a real time prototype of Akhanda Bharat. He was immensely successful in warding off Islamic invasion and helped Kashmir flourish in the domains of Science, Arts and architecture – the famous Martanda Sun Temple was constructed during his regime.

The Islamic infiltration into Kashmir began in the early 14th Century when a Mongol Chieftain called Zulju invaded Kashmir in 1320 CE and defeated the last hindu ruler of Kashmir, Suhadeva of the Lohara dynasty, who fled to Kistwar. Taking advantage of the mayhem, the son of a Ladakhi Chief, Rinchana usurped the throne of Kashmir but not before converting to Islam under the influence of a Sufi saint Bulbul Shah aka Sayyid Sharfudin and adopting the Muslim name, Sardarudin Shah, thus becoming the first Muslim ruler of Kashmir, who paved the way for the entry of Islam in Kashmir. The Sufi saints had an indelible influence on the Kashmiri populace , who, in the garb of being moderates, successfully converted the naïve people of Kashmir to Islam.
Kashmir’s tryst with bloodshed and brutality commenced since then. Once of the most tyrannical Islamic rulers of Kashmir was Sikander Shah, whose talibanisque rule saw the banning of art, music, gambling and intoxicants, forced conversion of the ‘apostates’ and imposition of Jizya tax on the ‘non-believers’. He is inafamous for razing the Martand Sun Temple, one of the finest examples of ancient hindu architecture. Since then, Islam has been the predominant ideology of Kashmir with more than 97% of the population being muslims till 2014.
During India’s independence from British colonial rule in 1947, Maharaja Hari Singh agreed to accede his state to the Dominion of India, primarily due to the pressure of attacks by the Pashtoon tribals, which, in turn, was agreed upon by the Viceroy of India at that time, Lord Mountbatten. Though a plebiscite was proposed earlier to enable the people of Kashmir to decide whether they wished to stay with India or Pakistan or remain independent, the said plebiscite could not be held since a section of the Kashmiri residents and the Pakistan government questioned the legality of the accession to Kashmir. Jammu and Kashmir became part of India , which were governed under provisions of Article 370, which conferred upon it the power to have a separate constitution, a state flag and autonomy of internal administration. A portion of it went under Pakistan occupation , which in turn was divided into two parts – Azad Jammu and Kashmir and the ‘Northern Areas’ constituting of Gilgit-Baltistan – the said part came to be known as POK or Pakistan Occupied Kashmir. The Article 370 was a major bone of contention with Indian Nationalists led by Dr. Shyama Prasad Mukherjee . Dr. Mukherjee stated that there cannot be two sets of laws, two heads of state and two flags (‘Ek Desh mein do vidhan, do pradhan aur do nishan nahi chalenge’. He died under bizarre circumstances while protesting against the said Article in Jammu and Kashmir in 1953, which most believe to be a cold blooded murder by the then ruling dispensations of India and Jammu and Kashmir.
Article 370 was abrogated by the current Narendra Modi-led NDA Government of India but not before the colossal loss of lives of innocents in the valley, particularly the Kashmiri Hindus.

The Kashmiri Hindu Genocide on January 1990, remains as one of the worst cases of ethnic cleansing of a minority populace in India since independence. What made it worse was the abject silence and apathy of the ruling dispensation of India and the fact that it was engineered and facilitated by the ruling dispensation of Jammu and Kashmir. Huge crowds of radical Islamists gathered at mosques and issued blood curdling threats from there asking the Hindus to leave the value or face imminent death. ‘Raliv, Galib, Chalib’ was their clarion which went down in history as one of the most terrifying ultimatums issued to an ethnic minority by a monstrous religious majority. It meant ‘Convert, Die or leave’. Thousands of Kashmiri Pandits were butchered, converted and their women gang raped with a host of macabre stories of individual torture now being brought to the fore, what with a favourable, nationalist government at the centre.
The saga of Radical Islamist horrors did not stop at that. Several attacks by Pakistan sponsored terrorists with a certain amount of local help continued unabated killing some of the remaining hindus and collateral damage to the Muslim population too. The Indian Army, whose task was to combat these beastly militants and usher in peace in the valley were targeted too, being welcomed with stone pelting by the brainwashed locals there. The grotesque killing of the CRPF jawans at Pulwama in February, 2019 is one of the manifestations of their blood thirsty and vengeful nature. Pakistan never gave up hope of annexing the entire Jammu and Kashmir and often received overt and covert support from the United Nations on that count, using their infamous lobby. With a strong nationalist government at the helm in India now coupled with their own financial bankruptcy have cast a spanner on their evil Kashmir designs to be raised at the UN. But that doesnot imply that they have given up on their Kashmir dreams altogether and the abrogation of Article 370 was just the right thorn in their flesh as it ended the virtual independence of Kashmir making it that much more difficult for it now to think of occupying it.
However, post the abrogation of the Article 370 and converting Jammu and Kashmir into a union territory, the terrifying atmosphere in the valley is changing a wee bit, though news of terror attacks do make the headlines off and on. At the same time , one does get to hear the heartening news of terrorists being neutralized by our Armed Forces. In such a scenario, installation of a statue of Chatrapati Shivaji in Kashmir is of immense significance.
Chatrapati Shivaji Maharaj is the epitome of Hindu pride – one of the mightiest of rulers who was undefeatable and had taken on the mighty Mughal rule under the monstrous Aurangzeb with aplomb, not only winning back territories lost to him in battle but also expanding. Shivaji Maharaj and his Maratha descendants were successful in ending Mughal rule over most of the Indian subcontinent, dealing a death blow to the same. His tale of killing Afzal Khan, the General of Bijapur in a one to one encounter inspires most Indians. Shivaji was a monarch, who was an unapologetic Hindu and brought back hindu traditions and customs in administration. He even reconverted two of his relatives, who had converted to Islam earlier on.

Chatrapati Shivaji Maharaj, till date, has remained as the most inspiring Hindu ruler in history, whom even the leftist historians could not ignore. Hence, the presence of his statue in the land of the ancient sage, Rishi Kashyap, which had almost been handed down on a platter to the radical Islamists, is akin to establishing our civilizational identity on the land that is rightfully ours for ‘Hindu’ is not a mere religion but the identity of the original inmates of the world’s oldest civilization.