The Great Maratha & the 3rd battle of Panipat. 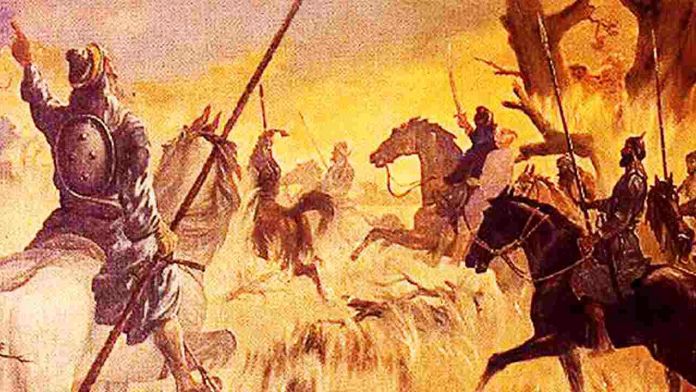 Growing up in the early 90s, I, like other kids of my generation, was a sucker for television. I was acquainted with the Third Battle of Panipat through Sanjay Khan’s mega serial The Great Maratha. As a Class VI student, I did not understand the importance of the battle in Indian history; but I liked the characters, the actors, the action and the dresses. Back then, I had no inkling that I would go on to study the battle in detail in college and university many years later. I also had little idea that the academic study would actually be so lacklustre that it would diminish my fascination for this great battle altogether. As a lifelong student of military history, I have always found the Third Battle of Panipat an epic feat of arms.

The Afghans under Ahmed Shah Abdali didn’t have an impressive field artillery; but they had a brutally effective mobile artillery mounted on camels. The zamburak (pronounced zambark) cannon were deployed in large numbers to fire at the enemy and change position, thereby harassing him more (This inspired the later day jeep-mounted recoilless gun or RCL, which, ever since its invention, has troubled tank units (cavalry of modern times) all over the world. An Indian soldier, Havaldar Abdul Hamid, had won the Param Vir Chakra for taking out three Pakistani tanks at the Khem Karan Sector during the 1965 Indo-Pak War with his RCL).

A zamburak (Persian: زمبورک‎) was a specialized form of self-propelled artillery from the early modern period. The operator of a zamburak is known as a Zamburakchi. The weapon was used by the Gunpowder Empires, especially the Iranian empires of the Safavid dynasty and Afsharid dynasty, due to the ruggedness of the Iranian Plateau, which made typical transportation of heavy cannons problematic. A zamburak consisted of a soldier on a camel with a mounted swivel gun. (a small falconet), which was hinged on a metal fork-rest protruding from the saddle of the animal. In order to fire the cannon, the camel would be put on its knees. The name may be derived from Arabic zanbūr “hornet”, possibly in reference to the sound earlier camel-mounted crossbows made. The mobility of the camel combined with the flexibility and heavy firepower of the swivel gun made for an intimidating military unit, although the accuracy and range of the cannon was rather low. The light cannon was also not particularly useful against heavy fortifications. They were usually never fired while the camel was standing or in motion; doing so would minimize accuracy and could injure the camel. Rather the camel would kneel when firing. The zamburak became a deadly weapon in the eighteenth century. The Pashtuns used it to deadly effect in the Battle of Gulnabad, routing a numerically superior imperial Safavid army.

The zamburak was also used successfully in Nader Shah’s campaign to India & when the Ahmed Shah Durrani & military genius Nader Shah utilized a zamburak corps in conjunction with a regular artillery corps of conventional cannon to devastating effect in numerous battles such as at the Battle of Damghan (1729), the Battle of Yeghevārd, Battle of Karnal & Third Battle of Panipat.

In Third Battle of Panipat Sadashiv Rao Bhau had the best artillery in the country (200 heavy guns ) along with the English, and had French-trained gunners and musketeers who could fight in European fashion. On the other hand, the Afghans under Ahmed Shah Abdali didn’t have an impressive field artillery; but they had a brutally effective mobile artillery mounted on camels. The zamburak cannon were deployed in large numbers to fire at the enemy and change position, thereby harassing him more . the Afghans deployed 3,000 camels equipped with Zamburaks. On Abdali’s side, the center was commanded by Shah Wali Khan, his Wazir, with the royal cavalry. With him were 3000 Zamburaks, which were small cannons placed on camels, and were light and more mobile than the static maratha cannons. As a results these 3000 gunners or Zambukarchi’s delivered fatal blows to the Maratha Van guard with devastating effect since they were able to swiftly change positions immediately after firing & being mobile were getting deputed in area’s of maximum need penetrating deep inside the Maratha fortifications & delivering with brutal effect, compared to the Maratha heavy artillery which Ibrahim Gardi was commanding & these 200 guns did’nt change positions, yet Gardi was able to eliminate 15000 Afghans single handedly indicating the massive fire power they had & brutal accuracy.

Surya Roy
Previous articleFinancial Fraud in Bihar- Sanitary Napkins were ordered for Boys; Inquiry Ordered
Next articleINSTALLATION OF THE STATUES OF CHATRAPATI SHIVAJI MAHARAJ IN KASHMIR – A SIGNIFICANT STEP TOWARDS THE ESTABLISHMENT OF THE CIVILIZATIONAL IDENTITY OF THE REGION
- Advertisement -