Hadi Rani, story of courage and sacrifice drenched in blood of new bride, who cut off her head to motivate her husband to focus in battleground 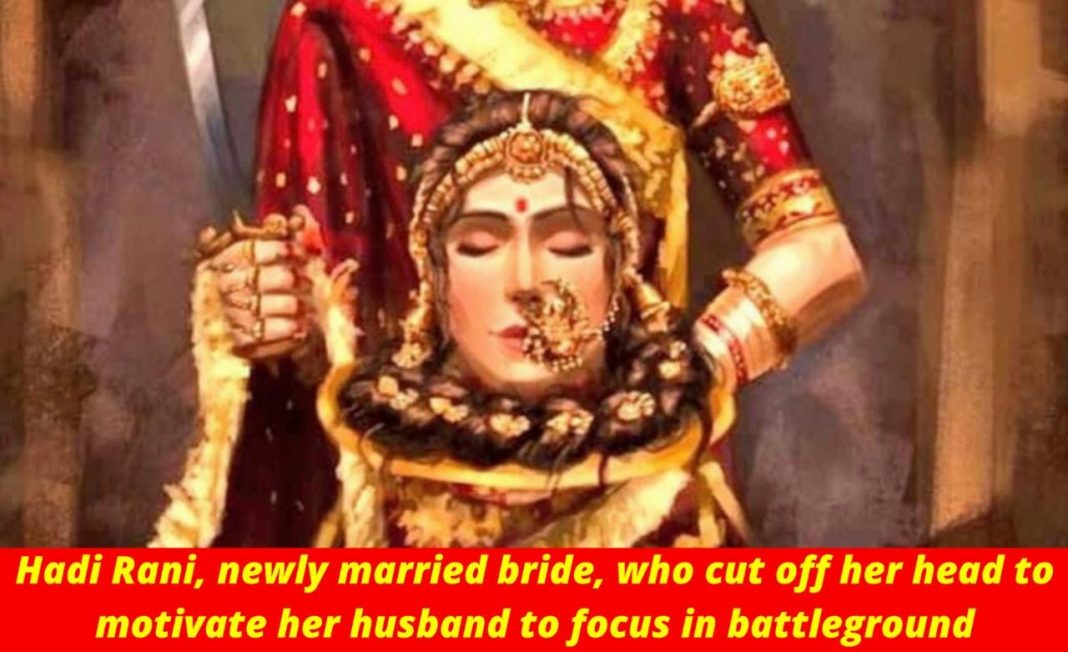 How far can ‘a newly married bride’ go to motivate her husband to concentrate in battleground, when the war is knocking at the door? A dutiful newlywed bride—who was radiating in red bridal outfit and ornaments with vermillion on her head, Bindi on her forehead, bangles in her wrists—would inject strength through her words to prepare her husband—who was inseparable from his newly married wife—to go to war. But, Hadi Rani, queen from Rajasthan, sacrificed herself to inspire her husband to battle with barbaric forces of Aurangzeb. Soil of Rajasthan is full of glorious tales of unparalleled sacrifice, valor and bravery to keep it safe from Islamic invaders.

Mahrana Raj Singh or Maharana of Mewar, who ruled Mewar Kingdom from 1652 to 1680, was a warrior king to defy Aurangzeb’s tyranny. He had not only denounced Jizya tax levied by Aurnagzeb, but annexed various Mughal posts in May 1658. Once, Chatrapati Shivaji had taunted Aurangzeb to ask the Rana of Mewar for Jizya tax if he had the guts, instead of terrorizing defenseless citizens. Maharana Raj Sing had fought many battles against Aurangzeb.

Maharana Raj Singh had a Samant or warrior chief, Ratan Singh Chundawat, who was also chieftain of Salumbar from Mewar. He had just married Hadi Rani, daughter of Hada Rajput Dynasty. Meanwhile, Aurangzeb marched towards Mewar with his colossal army in order to attack. His additional army was also coming from Delhi to assist Aurangzeb.

A newly married Ratan Singh Chundawat received a message from Maharana Raj Singh to stop the additional army coming from Delhi to assist Aurangzeb. Warrior Ratan Singh Chundawat gave orders to his army to prepare for the war immediately, but an inseparable husband in Ratan Singh went to meet his newly wed bride with heavy heart. Sensing his hesitation, Hadi Rani evoked warrior from her husband’s heavy heart and prepared him to go to war, wishing him victory.

Ratan Singh Chundawat marched with his army on his galloping horse. However, on the way, he felt his soul stayed with his newly married wife. A restless Ratan Singh Chundawat sent his trusted man to his wife Hadi Rani to ask for token of love, which he could carry to battle. Reading her husband’s dilemma, Rani Hadi realized how he was distracted on battlefield. At the very moment, it struck her mind that it was she, who was distracting her husband from performing his duties to protect Mewar.

Hadi Rani decided to give her husband token of love so that he could focus in battlefield. Epitome of courage, glory and sacrifice, Hadi Rani cut off her head and put it on a plate in her dying moments. The trusted man covered Hadi Rani’s severed head with a cloth and carried it to present it to her husband. The warrior chief, Ratan Singh Chundawat was devastated to see his newly married bride’s severed head. However, the token of love by his wife had removed distraction in his mind. He tied his wife’s head around his neck by her hair and roared like lion on troops of Aurangzeb. He fought so bravely and fiercely that Aurangzeb’s forces had to flee. Eventually, he secured massive victory to protect the boundary of Mewar. After the war ended, Ratan Singh Chundawat got to his knees and cut his neck, as he had lost desire to live without his wife.

It is a story of valour, patriotism and sacrifice drenched in blood of a newly married bride, which motivates women even today. Rajasthan Police has formed a women’s battalion after her as “Hadi Rani Mahila Battalion” not only to honour Hadi Rani but to inspire today’s women.

There is Hadi Rani ki Baori, which is stepwell situated in Todarraisingh town about 30 kilimeter from Tonk city in Rajasthan.

Even today folklore singers tell her story in songs about her courage and sacrifice. People in India tell her story to motivate coming generation. Renowned poet Madhav Darak has written.