Get rid of mental slavery, this is new Bharat, clarion call by UP CM Adityanath 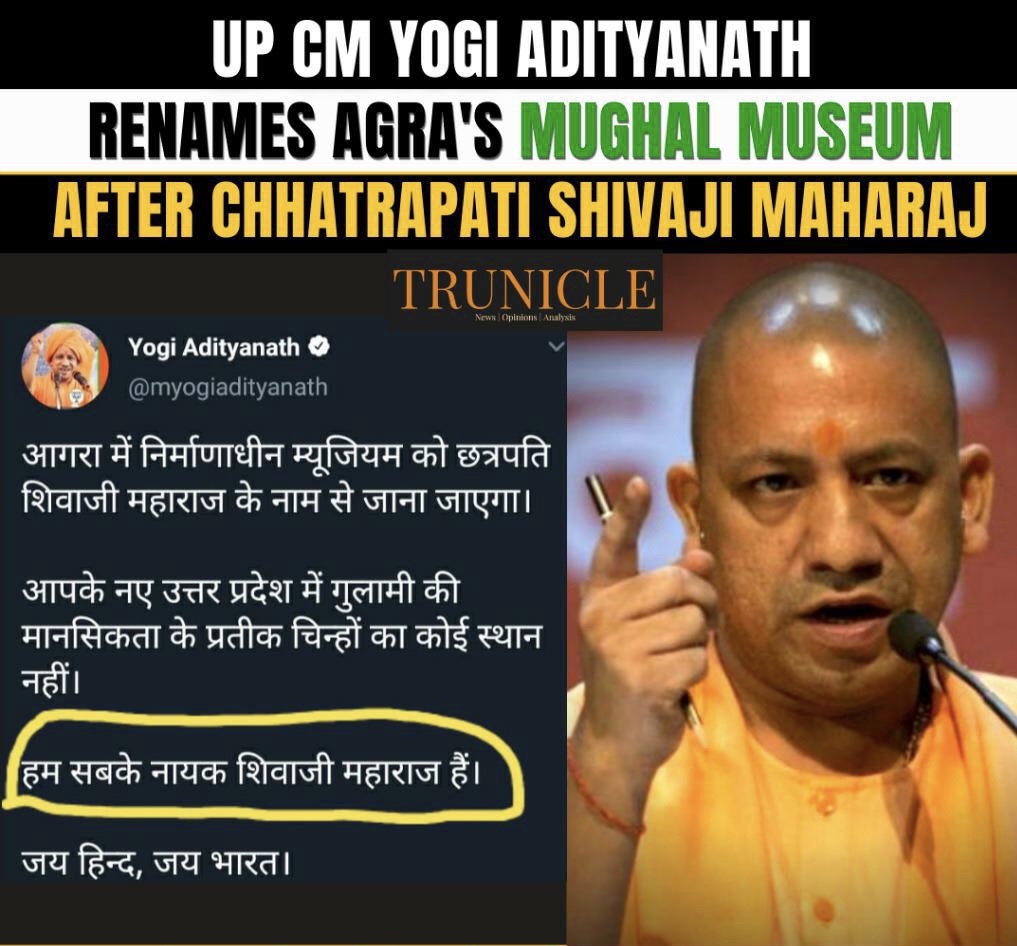 The World has been changing gradually, people are in a rat race to fulfill their dreams and aspirations. Amid all this, there...
Read more

Mughals were invaders, who plundered India, who wounded India’s civilisation by destroying its ancient temples to build mosques on it, who persecuted natives and brutalised them to convert to Islam. How can India glorify Mughals by naming its cities and streets after them? “How can Mughals be our role models?”

A Mughal Museum—which is being constructed in Agra in Uttar Pradesh—would be named after Maratha icon Chhatrapati Shivaji Maharaj. Uttar Pradesh Chief Minister Yogi Adityanath too, asked the same question, “How can Mughals be our hero?” He categorically pronounced, “there is no place for symbols of mental slavery in your new Uttar Pradesh. The Mughals cannot be our role models. Our hero is Shivaji Maharaj. The very name of Shivaji invokes a feeling of nationalism and self pride.”

Indeed, Chhatrapati Shivaji Maharaj, who founded Maratha Kingdom in late 17th century was Maratha warrior king, who fought the Mughals most of his life. He is known for his military conquests. Shivaji had established a competent and progressive civil rule with well-structured administrative organisations.

Today, UP Chief Minister is invoking Chhatrapati Shivaji Maharaj, who had revived ancient Hindu political traditions and court conventions, who had promoted usage of Marathi language and Sanskrit, rather than the Persian language, which was used in court and administration in those days.

The Mughal museum project had been approved in 2015 by the previous Samajwadi Party government of Akhilesh Yadav. It is being built on the eastern gate of the Taj Mahal would showcase artefacts and documents related to Shivaji along with the history of the Mughal rule in India. A separate gallery in the museum would be dedicated to Chhatrapati Shivaji Maharaj. The gallery would display documents related to Shivaji’s connection with Agra and his exile.

Chhatrapati Shivaji Maharaj belongs to entire India. In 1645, he had given slogan of Hindvi Swarajya, which means independence from foreign rule. Hindvi Swarajya was a campaign which sought to remove foreign military and political influences from land of India. Naming the museum after Chhatrapati Shivaji Maharaj not only inspire the coming generations, but it would be real tribute to Maratha warrior.

The World has been changing gradually, people are in a rat race to fulfill their dreams and aspirations. Amid all this, there...
Read more
Expose