Do you know how “King Prithu” of Assam defeated and crushed barbarian Bakhtiyar Khilji, destroyer of Nalanda University, in Battle of Kamrup in 1206 AD? 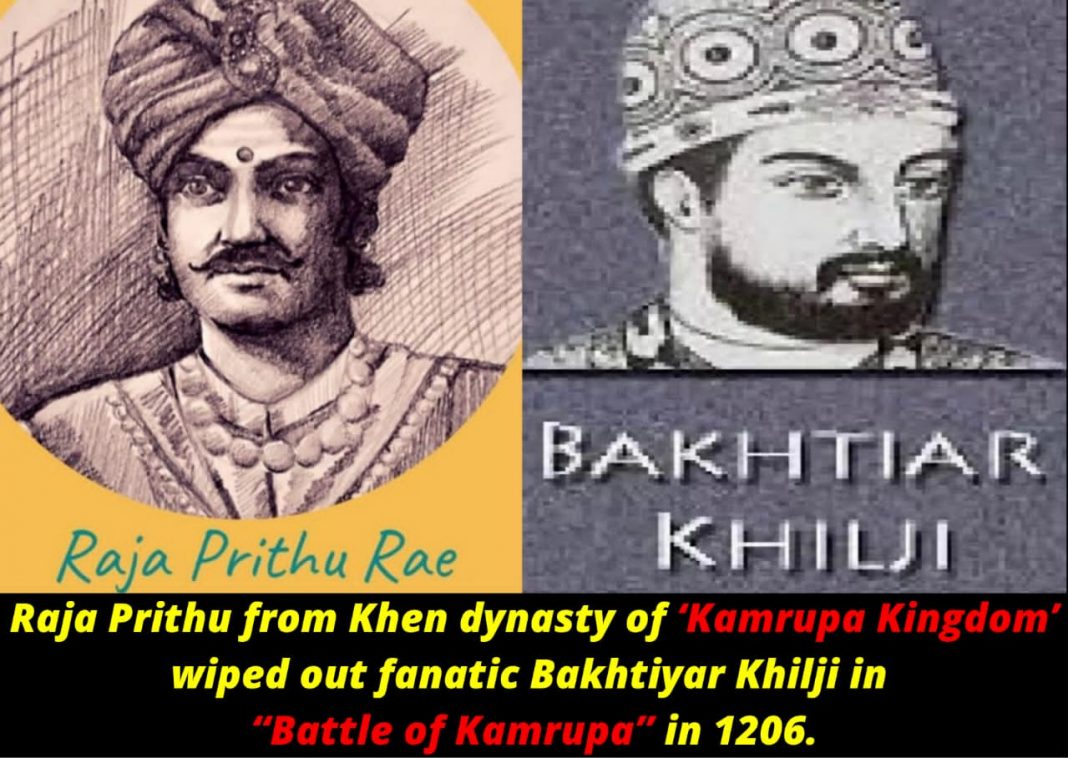 Mention of Bakhtiyar Khilji creates pictures of India’s ancient Nalanda University being brutally attacked and destroyed, students being slaughtered, teachers being murdered in its campuses and its libraries, the huge source of ancient knowledges, burning in flames for months. What could have been more traumatic and devastating than these visuals in history! Bakhtiyar Khilji was a fanatic Islamic invader, who had committed naked dance of death, destruction and despair of the worst Islamic atrocities in India to establish Islam. But, do you know how King Prithu of Khen dynasty of Assam not only defeated the fanatic Khilji in “Battle of Kamrupa” but also crushed his rage and fury to lead another battle that he slipped into depression and died some years later?

How unfortunate it is that Indians know of Khilji, destroyer of Indian civilization, but King Prithu, despite being one of the greatest warriors, who saved North East form barbarian Islamic invader, Khilji, was not given his rightful place in history. Stone inscription in North Guwahati mentions how King Vishwasundar Dev ailas King Prithu, who ruled from 1185 AD to 1228 AD, wiped out armies of Bakhtiyar Khilji.

Muhammad bin Bakhtiyar Khilji, member of Khilji tribe of Turkic origin—who had been denied the rank in the army of Qutb-ud-din Aybak—marched to Bihar to capture some of its regions ruled by Buddhists in North India.

Once he fell sick. He was almost on death bed as medicine by his doctors was not working. He was advised to consult Acharya Rahul Sribhadra, who was the head of Ayurveda department of Nalanda University. Reluctant Khilji put a strange condition before Vaidyaraj that he would not eat any medicine given by him. Accepting his condition Vaidyaraj Rahul Sribhadra asked Khilji to read Quran and he would be alright, because Vaidyaraj had applied a medicine paste on pages of Quran. Khilji read the pages of Quran with spit and recovered after some days.

Instead of being grateful to knowledge, which cured him, Khilji got offended that Indian doctors had more knowledge than his own doctors. To satisfy his wounded ego, Khilji furiously burnt down the great library of Nalanda University in 1193 AD and set 90 lacs manuscript on fire, which kept burning for three months.

At its zenith, ancient Nalanda University was devoted to not only Buddhist studies, but also trained students in fine arts, medicine, mathematics, astronomy, politics and the art of war. The campus of university was so huge that they accommodated over 10,000 students from Korea, Japan, Persia, Tibet, China and Greece and 2000 teachers. Khilji didn’t stop here, but he went on to plunder and ravage Vikramshila University and Odantapuri University all three situated in Bihar. His barbarian frenzy earned him political clout in the court at Delhi.

In 1203-1204 AD, Bakhtiyar Khilji attacked Lakshman Sena at his capital, Nabadwip and conquered most of the Bengal. His easy win over Bengal emboldened him to invade Kamrupa and Tibet in 1206.

With 12000 Turkish cavalry, Khilji advanced to attack Assam and Tibet from Devkot (West Bengal). He appointed a local chief from Himalyan frontier, converted to Islam, to serve as guide. After 10 days, Khilji’s army reached at the outskirt of Kamrupa. King Prithu of Kamrupa, now Assam, was aware of Khilji’s invading forces. King Prithu first, followed “Scorched Earth Policy” which meant to destroy all the possible resources, useful for enemies. It involves food resources, agriculture lands, water resources etc. The purpose of the policy was to starve and dehydrate the enemy soldiers.

After Khilji crossed Begamati river to enter Kamrupa, he ordered his troops to raid villages in Kamrupa. Alert King Prithu’s army launched a lethal attack along with other tribal communities on Khilji armies. The combined forces of tribal community and king Prithu’s army not only stopped Khilji’s armies, but wreaked havoc on them. As the supply line was disconnected, Khilji’s troops were exhausted and thirsty. The very next day, king Prithu’s bigger armies scared Khilji so much that his wounded men decided to retreat.

However, King Prithu relentlessly attacked Khilji’s retreating army, and killed many of them. Those who were able to reach the bridge on the river to protect themselves found it to be destroyed. Finding no option, fleeing soldiers jumped to river. Some of them drowned, but somehow Khilji survived with only 100 men to reach Bengal.

After suffering humiliating defeat Khilji slipped into depression. Thereafter, he never led any battle or campaign. At last he was assassinated by his own general Ali Mardan in 1206.

There is town called Bakhtiyarpur in Bihar. Is there any town or road named after the great warrior king Prithu?