Dear Rahul Gandhi, you complained it to US institutions were under siege by BJP, why did TMC win the Assembly Elections 2021 so massively in Bengal? 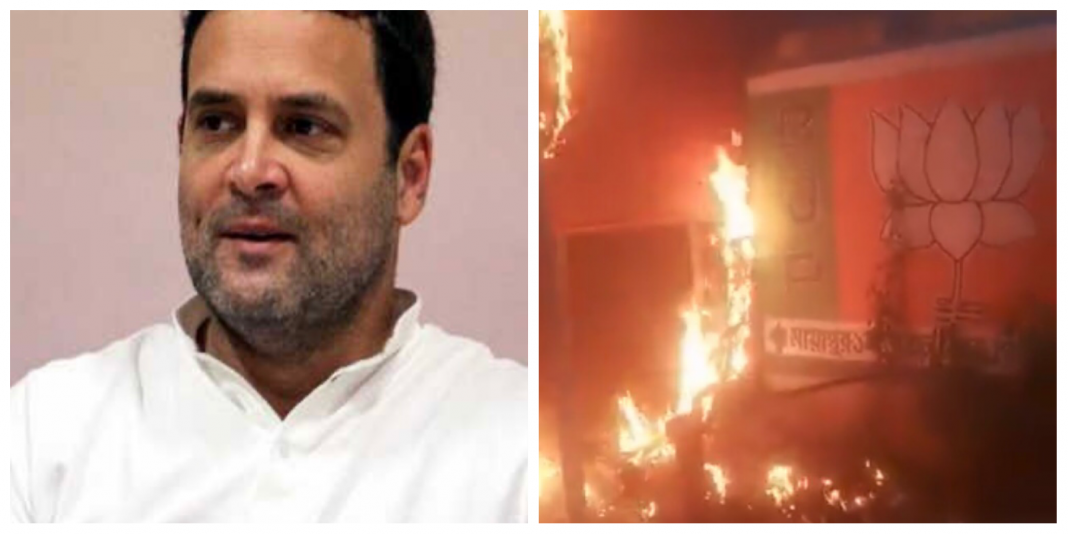 It is to be recalled Rahul Gandhi had pleaded with the United States to intervene in India’s internal affair, which had amounted to an insult to the sovereignty of India. On 2 April, in a video conversation, with former U.S. diplomat Nicholas Burns of the Harvard Kennedy School, Rahul Gandhi had said, “I don’t hear anything from the U. S. establishment about what is happening in India. There is wholesale capture of the country’s institutional framework. It is not just Congress, but regional parties like BSP, SP, NCP are not winning elections. There is absolute financial and media dominance by the ruling Bhartiya Janata Party (BJP). To fight elections, I need institutional structures, which can allow me to operate as a political party, I need a judicial system that protects me, I need a media that is reasonably free.” Congress leader Rahul Gandhi continued his diatribe attacking his own country to an American diplomat endlessly.

Dear Congress Party and Rahul Gandhi, if there is wholesale capture of the country’s institutional framework, how did Mamata Banerjee’s All India Trinamool Congress sweep the Assembly Election 2021 in West Bengal? Why do you and Congress party carry on propaganda of “EVM was hacked, Election Commission was compromised and democracy was in danger zone” only after BJP wins elections? Who is trying to target the institution of democracy? Who is trying to influence the institutions? Would Congress answer these questions?

Congress wants to win the elections, but without winning people of India. When it fails to win the voters of India, it turns into a propagandist spreading propaganda to the United States. However, for Congress, institutions are under siege only when BJP wins massively.

When the Aam Aadmi Party (AAP) swept Delhi Assembly Election 2020 to retain power in the Capital for the third time, Rahul Gandhi congratulated Kejriwal even if Congress won 0 seat in Delhi. All India Trinamool Congress won the West Bengal Assembly Election 2021, Congress party is celebrating their win even after winning 0 seat in the state. As usual, Rahul Gandhi went ahead and congratulated Mamta Banerjee for defeating BJP.

It is unfortunate that the media doesn’t question Rahul Gandhi about his double standard raising propaganda of “EVM was hacked, Election Commission was compromised and democracy was in danger zone” only after BJP wins. It is even more distressing that the media fell silent after TMC goons went on rampage to destroy homes of BJP workers and supporters. The BJP party office was burnt down at Arambag just after TMC sniffed its huge victory. A number of BJP workers were beaten; their properties were destroyed. BJP party worker, Avijit Sarkar was brutally beaten to death. When such news is flooded, the media is not asking any question from Mamata Banerjee or Rahul Gandhi.

Propaganda ran faster and farther that institutions are under siege by BJP and Narendra Modi is dictator. But, if there were even 1% truth in it, no power would have dared to harm BJP workers and BJP offices would not have been put on fire. It is BJP versus all political parties, who are creating and spreading all types of lies, misinformation and propaganda. It is their age old ecosystem, which has been spinning a fake narrative to target BJP and paint PM Modi as dictator, in their favour.

If the media were sieged by BJP, beating and killings of BJP workers in West Bengal would have been national news. Which media house would expose this fake narrative of institutions are under siege? None. Almost all the media houses are part of the ecosystem, which has been spinning a fake narrative to cor

Manisha Inamdar
Previous articleHail Democracy – Mamata’s TMC wreck havoc on Hindus and Violated EC & COVID Norms once election results were out
Next articlePost-poll violence in Bengal – is it just political vendetta or an existential crisis for Hindus?
- Advertisement -