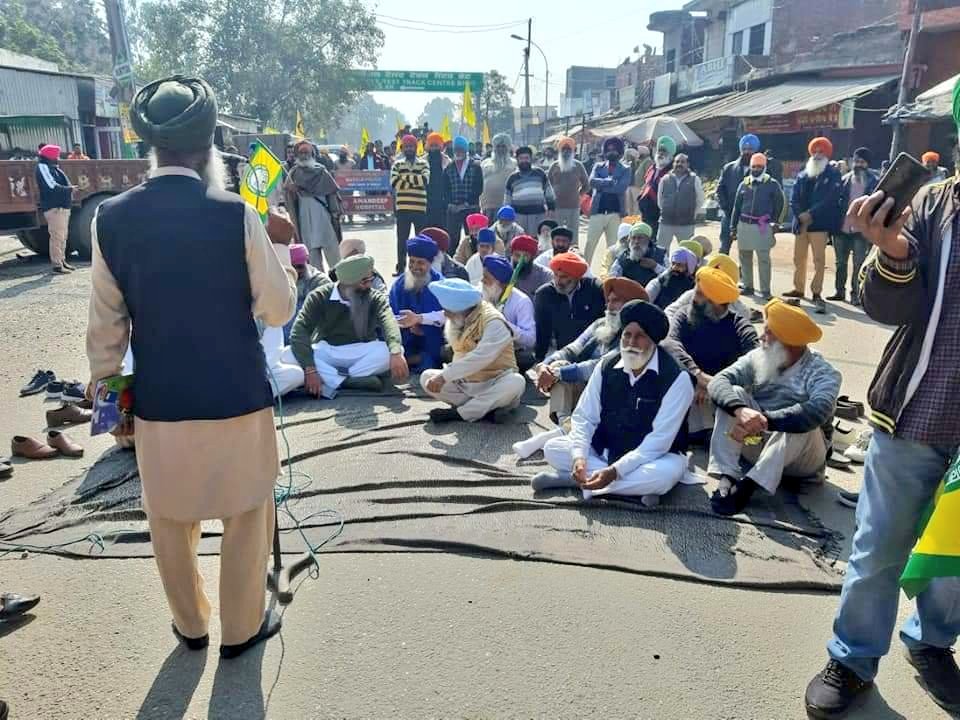 The three – hour countrywide ‘Chakka Jam’ – called by the farmer unions to protest against the Centre’s new 3 agriculture laws – ended on Saturday. BKU, Bharatiya Kisan Union leader Rakesh Tikait said that the government has been given time till October 2, 2021 to repeal the controversial farm laws.

From my all India sources, the Jam failed to enthuse support among ordinary general public. I went to the central New Delhi for a round trip, where i found more than normal traffic and no snarls. I did not find any Kisans or any of their cars waving the Kisan flags, nor any Congressis or AAPtards on the road shouting Jai Pappu or Jai Khujli.

It was calm, peaceful and quite normal day. Cars moved freely at the ITO crossing towards the India gate, albeit slowly but return was faster, smoother and trouble free. Tweeter Didi after meeting the dead young man family, who killed himself in the rash driving case was resting after her hard work for keeping her ‘pallu’ safe on her head during the short meeting.

The government shut down the internet at the 3 sensitive trouble spots, killing the ploy of the AAP leader Raghav Chadda to create wi fi hot spots in record time, but Delhi still await his so called wi fi spots even after 4 years. The whole Delhi except for the Lutyens Zone is littered with dirt, waste and dirty odour as household waste has not been lifted from dhalaos, since Khujli has not released money to the BJP ruled municipalities. What a shame and dereliction of his duty.

“After this, we will do further planning. We won’t hold discussions with the government under pressure,” he added. The government held 11 rounds of meeting at the iconic Vigyan Bhawan for hours convincing the farmers on the new farm bills.

The bandh was a total failure and if we read between the lines, there are signs of the protest petering out gradually. The jam was not to be done in the State of Uttar Pradesh and Uttarakhand, where Baba Yogi Adityanath was ready to welcome the trouble making farmers with glee and pleasure but good sense prevailed upon the farmers. Last time New Delhi did not have a big place to arrest the protestors and send them in Jail as Tihar Jail is already overcrowded and administration wanted the big stadia to jail the protestors but Khujliwal had denied his governments permission to use the stadia and further he withdrew permission to hire the DTC Buses. A large number of DTC buses, around 50 of them, were mercilessly rammed by the huge customised tractors and they were damaged beyond recognition.

The effects of bandh was huge as per ABP News and they had people lined up to give soundbites all around, little milder as India Today’s master fighter Rajdeep Sardesai has been de – rostered and we may not see his face babbling out any rhetoric. Recently I saw that NDTV could manage to get sound bites from JNU students, even though the university is closed. Such great planning exists to change the narrative. The pressure on India Today to improve its image is high as people have realised its fake narratives.

The directive must have been naturally, go slow but Pudhe challa, pudhe challa not khali thamba as the BEST ticket conductor giving ticket will say in Mumbai. If I read between the lines. 4 interpretations can be made:

The Government was clear in mind after January 26th mayhem and this was conveyed to the so called Kisan leaders. We will hit you, not lightly but very very hard. The best danda wielding 6 ft cops were the front end leaders. The whole region was made into segregated compartments, with different treatment for potential trouble makers in each zone and each zone was to be carefully videographed to catch at least one frontal image for possible matching using video analytical tools and the videographed with sharp high density cameras and mobile cameras. The police was ready with convoy of buses which came from para military forces and they were braced. Many road dumpers were rolled into duty to fight the mighty tractors. I had suggested to use heavy duty iron solders to pierce the tractor tyres especially the front tyres to demobilise the tractors. The usage of cranes to lift the tractors was also planned. The warning was clear, don’t play mischief, we are recording and we will not give you passports and government jobs and share the data with private employers and may be with banks and local administration so that you don’t get loans, passaporte and other government subsidiaries.

Netaji must have also been told that your license of petrol pump will get revoked, no petrol supplies in the future, so better behave. He is also rumoured to have 2 outlets which have car selling agencies. Similar warnings must have been given to the companies, whose agency Netaji has.

The Twitter was warned, Instagram was warned, Facebook was warned to block many accounts operating from enemy nation and filing of criminal case against global celebrities had its own effect. Niece of VP of USA was heavily trolled and she had to block several of her trollers. If the followers get reduced heavily the spread of anti-India rhetoric gets reduced for sure.

US administration has praised the new Farm Bills and this will have a cooling effect in the opposition of the bill. UK has also distanced itself from the internal affairs of the nation.

Government indicated that regions where peace is returning it will open up internet and 4G services were restored in the Jammu and Kashmir region, while around 400 social media handles have been banned and internet has been shut in most districts of Haryana and Punjab, the protestors were not able to spread their canard in the real time, except at the border point. Protestors who unfurled the sikh flag have been identified and look out circulars have been sent. Police has sent notices to many Kisan netas and being tracked continuously.

A plaint has been filed in the Hon’ble SC to restart the Internet in the Punjab and Haryana and the trouble site and has been listed for hearing. A similar plaint has been filed by citizens for the inconvenience being caused for citizens living in the area. Business is returning to near normal, travel restrictions are being removed. Schools, colleges and university campuses are getting reopened. Schools are reopening in phases but due to the dharma, connectivity is getting disturbed. Trains have been stopped at the border between Punjab and Haryana and power outages are increasing as power plants have run out of coal and movement of goods are having its own problem. The government will take a strong rebuttal in the SC and will submit who destroyed 1500 cellphone towers and attacked reliance retail and other establishments. Punjab government has got entangled in its own game.

FAO took no umbrage but some protestors shouted slogan in front of FAO office and Indian embassy was attacked recently.

The nation suffers and importantly if this dharna continues for long, economy of Punjab will slip forever. Congress must understand this.