Brihadeshwara Temple at Thanjavur is Pride of Hinduism . 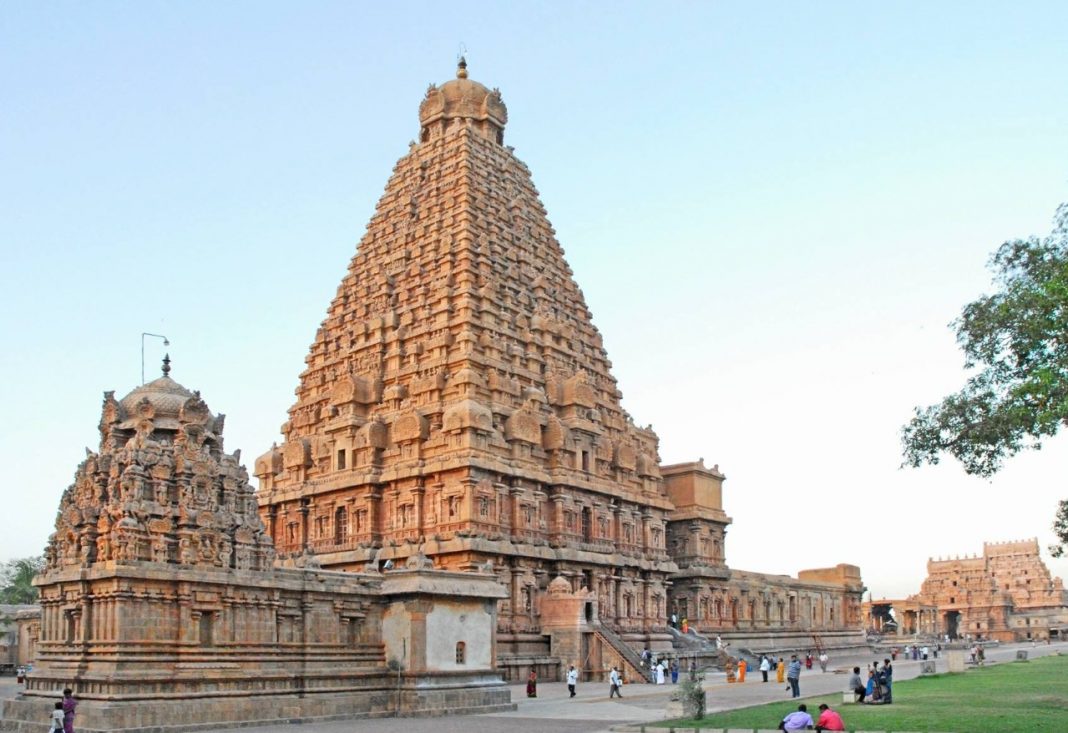 When people think of India they think of the Taj Mahal, Shāh Jahān’s Eternal memorial dedicated to his wife Mumtāz Mahal.

But there is a more ancient and secret India hidden deep in its tropical jungles with one of the greatest building efforts in the Human History produced Thousands of strange and mysterious temples, today they are lost and forgotten. This is India’s Deep South the land of emerald green Rice fields and Immense Palm Forests where every few miles temples sour towards the heavens in the country side.

Here over a thousand year ago, 985 AD to be exact Rajaraja Cholan became King of the Chola Dynasty, His Original name was Arunmozhivarman and his title was Rajakesari Varman or Mummudi-Sola-Deva, he was the second son of the Parantaka Cholan II.

His capital was the city of Thanjavur. Thanjavur was the royal city of the Cholas, Nayaks and the Mahrattas. Thanjavur derives its name from Tanjan-an asura (giant), who according to local legend devastated the neighborhood and was killed by Sri Anandavalli Amman and the God Vishnu.

He was one of the greatest kings of India and in the south, he embarked on one of the largest building plans in the history of Mankind that still continues till this day, He and his successor have moved more Stone than the great pyramid of Giza.

This temple is so large that over 200 Taj Mahal’s can fit into its Temple Grounds.

It’s one of the most amazing buildings in India, its 10 times taller than anything builds before it and not only it’s huge but its made of Granite, one of the hardest stones in the world. The inner shrine under the large tower contains a large stone Lingam, 12ft in height and 5ft in diameter. The original name of the deity was Rajarajeshwar. It was the Marathas who gave it the name Brihadeeshwara or the Great Ishwara. The statue of Nandi at the entrance of the temple is carved out of a single stone. The image of Nandi faces the Sanctum and constructed with such great precision that it reflects the rays of the Sun on to the Sanctum.

A unique stone named Chandrakanta is laid on the Sanctum which is said to regulate the temperature inside the shrine. The walls and ceilings of the shrine are replete with magnificent sculptures and bear silent testimony to the creativity of the craftsmen. Several other shrines dedicated to various Gods are located within the temple premises, along with the images of Navagrahas, the nine planetary deities. Numerous bronze statues depicting Chola art prevalent in the 11th century are also found within the temple complex.

To build Temple’s like this, required Huge Amounts of Money, and the way to get it is by attacking your weaker neighbors and Rajaraja began his career with the conquest of the Chera country. He defeated Chera King Bhaskara Ravivarman, whose fleet he destroyed in the port of Kandalur. He also seized Pandya Amara Bhujanga and captured the port of Vilinam. By his campaign against the Singhalees, he annexed northern Ceylon (Modern Day Sri Lanka), building a number of a stone temple in the Ceylonese capital Polonnaruva, of which one now stands to Shiva. It was at about the 14th year of his reign (AD 998-999) that most of his triumphs were achieved. Having already overcome the Chera, Rajaraja assumed the title “Mummudi Cholan”.Through his son Rajendra Cholan. Chola also simultaneously directed his arms against Ceylon. Rajaraja moved the capital from Anuradhapura to Polonnaruwa. With Rajaraja, the Chola culture and Shiva religion permeated the whole of Ceylon (Sri Lanka).

Rajarajan having thus realized his cherished military glories, in or about 1003 AD has sheathed his sword, and turned his thoughts towards a life of peace. It was about this time, that the Chidambaram temple authorities bestowed on him the title of “Sri Rajarajan”.

After Rajaraja secured a good supply of money he started construction on his Temple of Bragatheeswarar. The quarry that supplied the granite, one of the hardest stones in the world, was over 50 miles away from the temple site. Most of the Stones were moved over Boats but some much heavier ones like the Capstones which summit the top of the tower weight 40 ton’s each, were moved with the combination of a Ramp and Elephants. The main temple is entirely built of granite. More than 1,30,000 tons of granite is said to have been used to build it. The original Ramp’s remains still exist today after over a 1000 years and its calculated to be at a Gentle 6-degree slope pointing towards the Temple Top and is situated 1 mile from the temple. After calculations, a Ramp with a 6 degree slope and 1 mile away would intersect the tower’s top exactly 216ft in the air which is also the height of the temple tower known as Dakshin Meru or Southern Meru is topped by a dome structure which rests on a single 7.7 m square granite block weighing around 80 tons. To Move the Stones from the Quarry to the Ramp and up on the Ramp, Elephants were used by using wooden Rollers beneath the Stones so they could be rolled into place much like how the Ancient Egyptians made the Pyramid. The entire rectangular complex measures approximately 140 x 75 metres and is surrounded by a wall with regular interior niches. Inside the compound are various secondary shrines and a monumental double gateway entrance. The building has a front entrance porch (mandapa) with 36 columns, and there are two additional entrances at the base of the tower on each side. All three entrances are decorated with guardian figure sculptures, some double life-size, and are approached by a richly carved monumental flight of stairs. The hundreds of niches of the exterior are decorated with sculpture of divine figures (murti) – especially Shiva and Devi, lion heads (kirttimukha), and fan shapes.

You’d think Rajaraja was crazy going to so much trouble to make just a Temple, but Rajaraja was a very Religious man and he was caught between a Rock and a hard place, on one hand His Religion Forbade him to kill and on the other hand to be a successful king he had to make war on his neighbors for his people’s sake otherwise his kingdom would be weak and easily overrun and so he was responsible for the deaths of Hundred’s of Thousands of his enemy’s. He firmly believed as do all Hindu’s today in Rebirth & Reincarnation, that your actions in this life will determine your Lot in the next one, given the blood on Rajaraja’s hand he might come back as a worm or something even worse. So he spent fabulous amounts of money on his temple’s for example its written in an inscription that it took 4000 cows, 7000 Goats and 30 buffalos just to supply the butter required for the Lamps that were lit in the temple & temple grounds, all this to light just 1 temple and Rajaraja provided for 100’s of temples that he created just to insure that he kept his karma in good standing because of the generosity he hoped that gods would overlook his transgressions and be persuaded to reincarnate him as something better than a worm.

Indian Religion during Rajaraja’s time also spread across other lands, that’s why in the steaming jungles of Cambodia the Temples of Angkor wat don’t depict Cambodian Gods but the Gods of India. Not only did religion spread Art also spread when Europe was languishing in the Dark Age the Artist’s in the Chola Empire were making bronze statues like the famous Nataraja.

Shiva who appears as Nataraja the Lord of the dance simultaneously crushing the dwarf of ignorance under his foot, beating the drum of creation, unleashing the fires of destruction and finally raising 1 hand in assurance telling us to fear not.

The temple was laid out on a precise plan of 16 x 16 squares, a design known as padmagarbha mandala in the Dravida architecture of southern India. The interior contains the typical passageway for worshippers to perform a circumambulation, in this case on two levels. There is a snapana platform, too, for the ritual bathing of the god located within a portico (ardhamandapa). Murals decorate the interior walls, and, once hidden by later Nayaka period paintings, these include fine images of Rajaraja I, his spiritual advisor or guru, and his three queens. Other subjects include a Nataraja (Shiva as Lord of the Dance) who was the clan deity of the Cholas (kuladevata).

When Rajaraja died in 1014 he left behind him a shining legacy that made him one of the greatest patrons of art and religion in India.

The Chola Dynasty ended with King Rajendra Chola III the last Chola King. The last recorded date of Rajendra III is 1279 A.D. There is no evidence that Rajendra was followed immediately by another Chola prince. The Chola empire was completely overshadowed by the Pandyan empire, though many small chieftains continued to claim the title “Chola” well into fifteenth century C.E.

The temple has a portrait of Raja Raja Cholan paying obeisance to Lord Natarajar. This is undoubtedly, the first ever instance of a royal portrait.

Inscriptions in the temple point towards Kunjara Mallan Raja Raja Perunthachan as the chief architect of the temple. His successors survive to this day and practice the art of Vastu or Vastu Shastra.

Depictions of nartakis or dancers showing eighty one of hundred and eight karanas (synchronised movements of hands and feet) in Bharata Natyam are carved here. These karanas are a part of karanas mentioned in the Natya Shastra of Bharata Muni or Sage Bharata. There is also evidence that the temple was a platform for talented dancers to showcase their talent. These depictions are first of their kind.

What astounds historians is that there was not a single granite quarry in about 100 km radius of the temple. This means that transporting these stones would have been a herculean task. But Raja Raja Cholan insisted on the use of these stones. All of these features make this Chola temple of Tanjore, a magnum opus of the Chola reign.