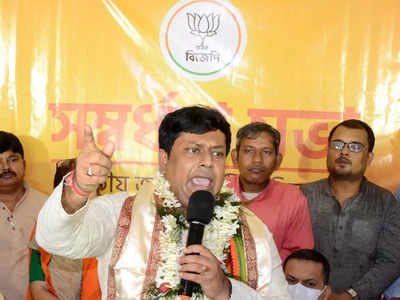 Mamata when Rohingyas are in Front illegally infiltrated in our great nation Bharat sucking up resources eating up jobs welcomes them and allows them and their supporters to burn this beautiful city of Kokata (capital of West Bengal and pride of Bengalis) while protesting against NRC.

Shamelessness and arrogance have no place in the pages of humanity. Be it Ravan , KharDushan or Mahisashur all have been depelted . Even if history remembers them it remembers them with disgust and anger so will you be remembered Mamata Banerjee. Your story won’t be different. Like Your counterparts CPI(M) ruled for long but do not last in the hearts or memories of people so will you Mamata .

I congratulate Dr Sukanta Majumder for resuming the office of BJP Bengal President. I would also like to thank him for staging the protest in front of Mamata’s place today with the dead body of BJP Leader Dhurjyoti alias Manas Saha who succumbed to the injuries made on his body in post poll violence waged by TMC workers shielded by both “Police and Proshashon.” If sources are to be beloved the BJP contestant from Magrahat constituency was dragged out if the counting station and was beaten with bamboos. Only in Bengal this happens that a contestant of main opposition party fights democratically in elections and gets killed and neither media nor the so called intellectuals bats an eye. Madam Mamata ji people don’t remember the demons in good taste and worship even the defeated kings/queens like Jhansi Ki Rani who waged war for the welfare of the people. Learn from history if you have no knowledge of the same learn from chief minister of your neighbouring state like Odisha where violence is no solution for political opponents. Mam even the record of infamous Bihar and Uttar Pradesh have been bitten in violence by your beloved TMC haramda vahini .