Angkor Wat, the largest Hindu temple, dedicated to God Vishnu in Cambodia is testimony of how powerful Hindu civilisation travelled from South India to South East Asia millennium ago 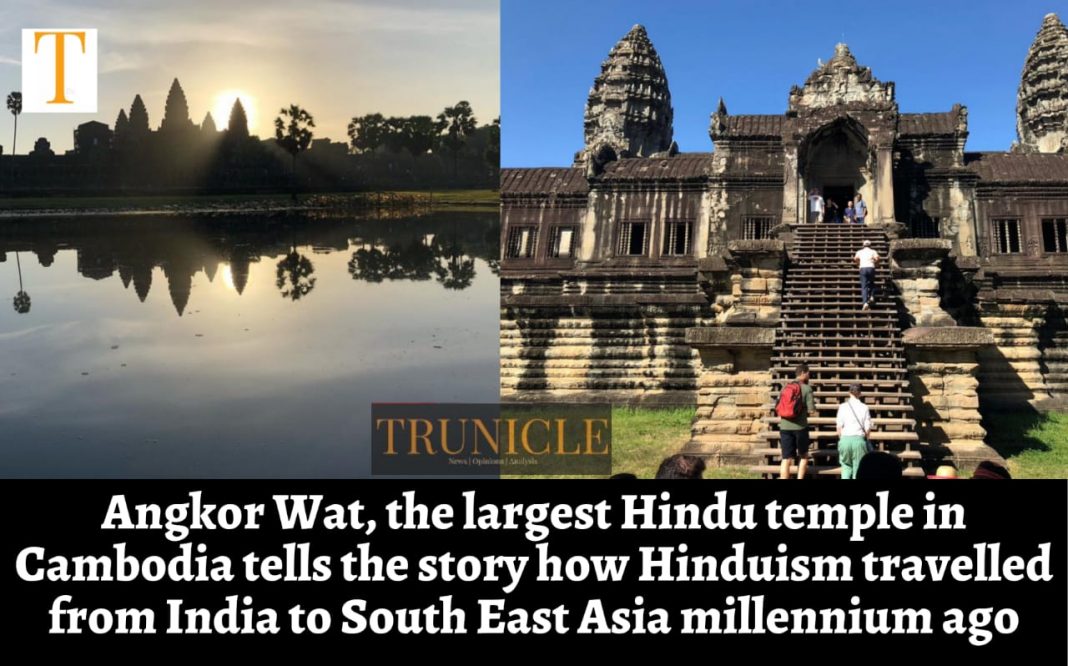 I reached at Angkor Wat, the biggest Hindu temple dedicated to God Vishnu at Siem Rip in Cambodia at 5:30 am, to witness the sun rising at its Shikar (spire of temple) before Corona pandemic started hitting us. The gentle Sun in the morning gave impression as if it was touching the topmost crown of temple. The spectacular view was divine. It felt as if every atom of my body merged with divinity and I stepped into a time machine to go back in the era, when barbarian and blood thirsty Islamic invaders had not destroyed and ravaged Hindu temples and heritages. Land of God Ram and God Krishna would have been overwhelmed with temples, where positive energy were generated to elevate devotees to the next level of consciousness.

Despite, thousands of Hindu temples were destructed by Islamic attackers to wipe out Hindu civilization, India still has magnificent temples such as Meenakshi temple at Madurai, Brihadisvara Temple at Thanjavur, Ranganathaswamy Temple at Srirangam in Tiruchirappalli and many more, as South India is known for majestic and heavenly temples. Surprisingly, South India is not home to world’s largest Hindu temple, but it is Cambodia, which had built the largest Hindu temple, Angkor Wat, the engineering marble of 12th century.

Splendid Hindu temples, but in semi ruins, at Seim Reap, offers a gateway to tourists to enter into glorious past of Hindu Khmer empire. Cambodia is anglicised name of Kampuchea, which was derived from the Sanskrit Kambujadeśa, in Hindi कम्बोजदेश, or Kambuja, an early tribe from northern India. An inscription dated 947 AD, of Baksei Chamkrong, a Hindu temple at Siem Reap, dedicated to God Shiva, says Swayambhuva Kamboj, a legendary Indian sage reached South East Asia and married a Naga princess, Mira. This is how Indian and local races got united. However, historians claim Hinduism had taken root in Cambodia more than a thousand years ago, but not through violent conversion machine using force, but through traders from South India.

Angkor Wat, which means “Temple City” in the Khmer language, is an enormous Hindu temple dedicated to God Vishnu, spread in across more than 400 acres at Seam Rip in Cambodia. Design of Angkor Wat Temple, inscribed in the UNESCO’s World Heritage list in 1992, is representation of Mount Meru, which is said to be center of universe and abode of Gods. Angkor Wat was built by Emperor Suryavarman II, who ruled the region from 1113 to 1150, as the state temple and political center of his empire.

Emperor Suryavarman II was one of the greatest kings of Khmer empire, which was established by Jayavarman II (born in 770 AD – died in 850 AD) in 802 AD. Khmer Empire described Jayavarman II the most powerful king, who unified the country, as local chieftains and overlords were fighting in different parts of Cambodia before he was crowned in 802. Khmer language originated from South India. Similarities between the ancient Khmer script and Tamil are quite striking.

Since Hinduism travelled South East Asia via trade, Mamallapuram Port at Bay of Bengal in present Tamil Nadu, was used to be one of the busiest port during South India’s Pallava Dynasty, a powerful empire, which ruled from 275 AD to 897AD. It had profound influences all over South East Asian countries like present day Thailand, Cambodia, Java, Sumatra and all other Indonesian islands. Profound influences were cultural, language, religious, architectural etc. Name of Pallava Kings and few Pandian Kings end with “Varman.” Khmer kings, too carry the same surname “Varman.” Does it convey Kings of Khmer were descendants of South India Kings or related to Southern kingdoms? Why hadn’t Khmer Kings adopted some other native names?

While my mind was processing all the dots and connections why Cambodia looks quite similar to India, why Hindu temples are transporting me to ancient India mentally, I entered Angkor Wat. I bowed my head and folded my hands in reverence and respect of God Vishnu and the engineering marble. Inscriptions of Ramayana, Mahabharata and other pre historical epic tales on inner walls of Angkor Wat awestruck me. It felt the chisel had turned into a brush to tell us Mahabharata at Kurukshetra War, where Bhisma was being struck by Arjuna’s arrows. God Ram and his younger brother Laxman with his Vanar army marching towards Lanka on Ram Setu. Samudramanthan, when the ocean was churned to extract celestial nectar along with poison. It took me a whole day to experience every inscription and every deity in Angkor Wat temple.

Angkor Wat has been converted to Buddhist temple. The huge sculptor of eight armed God Vishnu’s head was replaced by that of Buddha. Many Hindu sculptures were replaced by Buddhist Art. How can it be said that Hinduism and Buddhism co-existed together? Irony is that Buddha or Gautam Buddha was also ninth incarnation of God Vishnu, still head of God Vishnu’s sculptor was decapitated to be replaced with head of Buddha.

Angkor Wat was the heart of Capital city of Cambodia thriving from 9th century to 15th century. But, it is conjectured the city fell to marauding attacks, because waterworks were destroyed and it ceased to function. Thereafter, it was overtaken by jungle and consumed by thick vegetation. And it was lost to sight. Forgotten for centuries, Angkor Wat was discovered by French Naturalist Henri Mouhat, who was hacking and cutting down thick branches in search of exotic insects. Dumbfounded, he stumbled upon in Angkor Wat in 1840. Goosebumps moment!

When I stepped out of Angkor Wat with rich enlightenment I absorbed, my mind asked a disturbing question. Why our generation were not taught the rich and glorious history of profound Hindu influence from South India to South East Asia? Isn’t it high time to rewrite the history?

Manisha Inamdar
Previous articleSome number analysis regarding India whether the second wave is for real or not.
Next articleChina’s Evil Empire – The saga of China’s own HOLOCAUST and ‘Organ Harvesting Business’
- Advertisement -