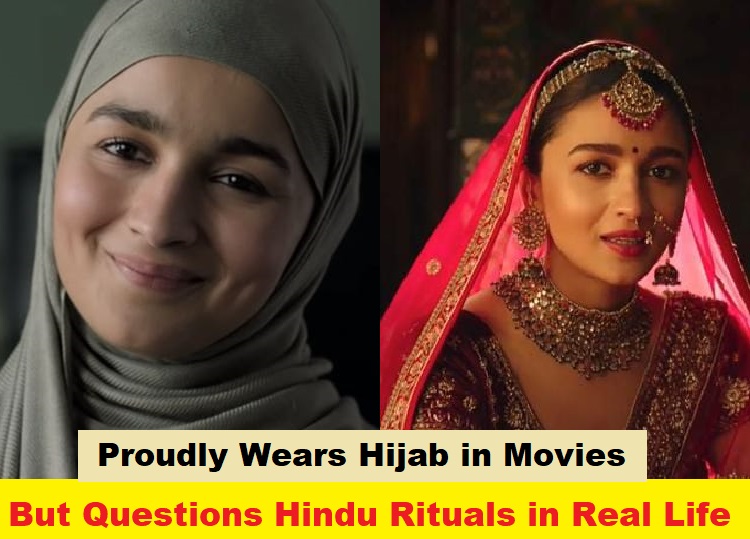 Smash patriarchy ….Smash Brahmins……Smash Hindu culture…..these are the woke statements which are loosely flung in day to day conversations considerably impacting vulnerable minds! The latest from the liberal stable is an ad endorsed by popular actress Alia Bhatt ridiculing the ritual of “kanyadaan”.

There are multiple reasons which make the whole issue quite bizzarre !

1* An advertisement is supposed to be a creative expression to market a product not selective indignation to make a social commentary.

2*Invariably these content creators focus on Hindu customs based on their half baked knowledge. How about questioning four marriages in Islam while getting married… questioning the patriarchal custom where the Christian father “gives” his daughters hand in marriage?

3*The actors are the face of the content and they have to take full responsibility of the narrative they present. This very Alia Bhatt proudly wears a hijaab in “Gully Boy”… sings to her baba ” dahleez paar kara de” in her wedding in “Raazi” which is absolutely fine with her. Why this sudden volte face or is it too convenient to question and create confusion over Hindu traditions.

While these advertisements are no authority to the social commentary they make few points need to be mentioned and reiterated.

Hinduism and Hindu traditions are extremely evolved and they have much deeper roots which cannot be compartmentalised as simple black or white.
An episode from Ramayana needs to be mentioned especially in this context…
When Raja Dasrath goes to Mithila to ask for Sita”s hand he keeps standing at the door of the palace. Raja Janaka promptly goes to greet him him and is extremely perplexed as to why King Dasrath is standing with folded hands. The king says that he is a beggar and a “Yaachak” who has come to ask for the greatest Daan of all. Thus his position is much lower than the Daani or the giver . Such is the enormity of Hinduism.
While belittling the word ” Daan” one only displays a myopic understanding of the greatest civilizational religion. KanyaDaan like Vidya Daan , Gau Daan, Bhu Daan etc are one of the noblest deeds a man can do.

It’s about time the hypocrisy and sham of these narrow-minded dimwits is dismantled.
It’s about time that the tenets of Hinduism are seen and propagated in the correct light.
And its HIGH TIME that these agenda driven pseudo secularists are taken head on

Sarita K Chamaria
Previous articleMohammad Ali Jauhar: A Social Reformer or a Radical Islamist who wanted an Islamic Caliphate in India?
Next articleFlorida and Texas to celebrate October as a ‘Hindu Heritage Month’
- Advertisement -