Yogendra Yadav aka Salim, “Messiah of Left & Tukde Tukde gang” and villain of the nation 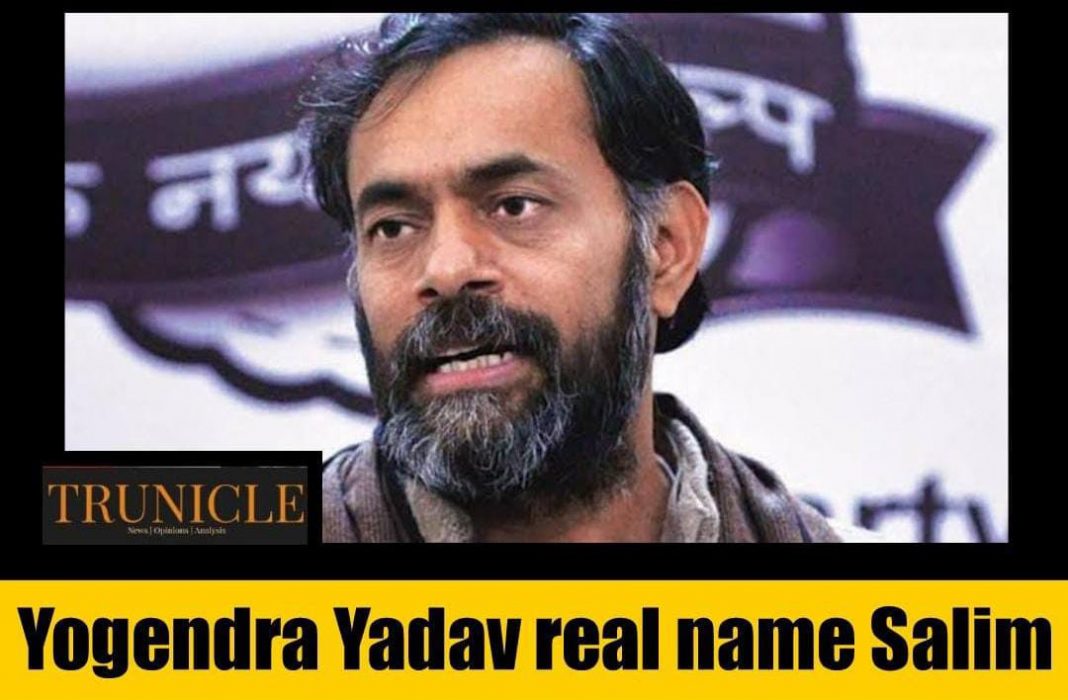 “In my constituency of Gurugram, I had fervently appealed to voters to make sure that the BJP is defeated at any cost. I said, Prime Minister is the biggest liar we ever had in the history of our country. Voters didn’t listen to me one bit. I am sad. I am angry and I am dejected. I want to hold them by their collars and say-you idiots.”

Does Yogendra Yadav believe in democracy? Does he believe in the Constitutions of India? How can someone, who calls himself intellectual, blatantly disregard the intelligence of common people? How can the self-proclaimed psephologist, who never got a single prediction of an election right, admit he wanted to hold voters by their collars and say, “You idiot.”

This is Yogendra Yadav, who floated new political party, “Swaraj Abhiyan” on 14 April 2015, after he was expelled from Aam Aadmi Party. He says that he is in politics because he feels there is serious threat to the idea of India. How does he safeguard the idea of India? By pulling all the stops to undermine the democratically elected government? Is this why Yogendra Yadav is found wherever anti-establishment protest is going on?

A day after anarchy and riots in Delhi on 26 January, Yogendra Yadav was booked for violence during farmers’ “tractor march in Delhi with other leaders under IPC section 307—which pertains to attempt to murder, section 147—punishment of rioting, and section 353—assault/criminal force to deter public servant from discharging his duty. What is to be highlighted that Yogendra Yadav played instrumental role in Farmers’ Protest demanding to repeal the three Farms Acts, which were passed by a democratically elected government with due debate in the parliament of India in September 2020. Did Yogendera Yadav hold the government by their collars for passing Farms Act? Is this way he was the part of cartel, which instigated the violence, anarchy, destruction of public properties and attacks on policemen?

In 2019 Yogendra Yadav participated in anti CAA protest demanding to reverse CAA, which was again passed a democratically elected government with due debate in the parliament in December 2019. Delhi Police has filed a supplementary charge sheet in North East Delhi riots case, in which Yadav is accused that he had instructed Sharjeel Imam to mobilize students of Jamia Millia Islamia, Aligarh Muslim Univerity and Delhi University for Chakka Jam to protest against Citizenship Amendment Act. Yogendra Yadav with Sharjeel Imam and Umar Khalid had worked on the concept of Chakka Jam, which had later escalated in violent riots claiming more than 50 innocent lives. The charge sheet also mentions the criminal conspiracy, under which “ultra-left ideology” which had nurtured and prorogated the common conspiracy to undermine the government established by law.

Yogendra Yadav doesn’t associate himself with Left Politics in JNU, but he doesn’t mind to endorse the gang, who shouted Bharat Tere Tukde Honge Insha Allah, Insha Allah (India, you would be disintegrated into pieces with Allah grace).

What is the idea of India, according to Yogendera Yadav?

Yogendra Yadava has a Muslim name too. His family and close friends call him Salim, while one of his sisters, Neelam is called “Najma.”

What is in a name? Indeed, every citizen is free to be named what he wants to. However, the story behind his Muslim name is thought provoking. Yogendra Yadav says his grandfather, Ram Singh, was a school headmaster, who was killed by Muslim mobs, when he tried to stop them from entering his school during communal riot in 1936. Yadav’s father was 7 years old in 1936. Hence, Yogendra Yadav was named Salim and his sister was named Najma by his father as a secular response to the murder of his grandfather.

Isn’t it weird and unthinkable? Why would a family honour killer of his father? Does Secularism mean complete submission? Does Secularism mean to glorify the killers of mob? Is this the idea of India of Yogendra Yadav? You kill us and we would glorify you. What kind of ideology is this? But, unfortunately this is how so call intellectuals have defined secularism in India.

This is what left leaning intellectuals want India to turn into a submissive nation with no spine. That is why Yogendra Yadav is found every anti establishment protest, which seek to weaken a decisive government.